12 Times Celebrity Festival Style Was SO on Point 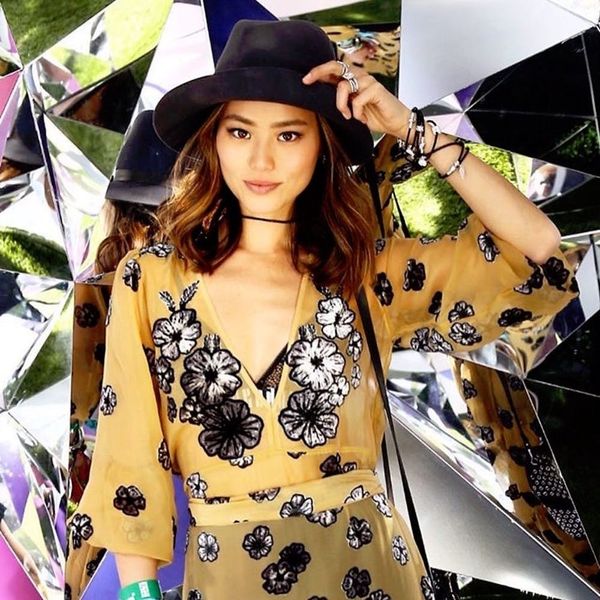 Coachella, Coachella, Coachella! We just can’t get enough of this multi-weekend music extravaganza that’s become as much about the potentially WTF-worthy fashion as the opening acts themselves. Can ya blame us? First, we shared a roundup of the craziest celeb looks at Coachella, and now we’re back with 12 of the best celebrity looks from Coachella 2017 and years past. Start taking notes, fellow festi-cool babes!

Can’t stop thinking about Coachella! The @theofficialPANDORA tent was the place to be, and I loved celebrating great music and cool jewelry with them and @stylewatchmag. Always #FestivalReady #Pandorastyle #Coachella2016 #Takemeback #ad

2. Jamie Chung: Sheer floral? Must be Coachella 2016. Jamie Chung gets the job done with her goddess-inspired see-through embroidered dress and stylish extras — namely, a felt fedora and rocker-inspired choker.

4. Kendall Jenner: As Kendall Jenner would say: The desert is your runway. Proceed to get this babe’s model-off-duty look with a vintage-inspired crochet dress, fringe-tastic leather sandals, and some statement-making bib necklaces. Sun-kissed skin non-negotiable. (Photo via Bauer-Griffin/GC Images)

5. Vanessa Hudgens: Sorry, not sorry, but Vanessa Hudgens, you will *always* be the queen of Coachella. In 2016, she let her inner flower child shine through with a beautiful floral maxi dress and some dainty layered necklaces.

6. Kiernan Shipka: This cutie patootie never ceases to amaze us with her ever-stylish track record. Case in point: Kiernan Shipka was spotted at Coachella 2016 in a chic butterfly denim co-ord (props to Valentino) and futuristic platform sneakers that would give Zenon a run for her money. Dare we say it — we’re still a tad obsessed. (Photo via Michael Kovac/Getty)

7. Emma Roberts: Our favorite It girl, Emma Roberts, just gets it. In lieu of overdone flower crowns and OTT poms, she dials it down with an ultra-femme white lace dress, cool shades, and lace-up desert boots.

8. Ellie Goulding: An ombre windbreaker reminiscent of the sunset? Check. Metallic short-shorts? Check. Plain ol’ white trainers? Triple check. While Ellie Goulding may have sported this athleisure-inspired look to Coachella ’16, it couldn’t be any more with the times. (Photo via Kevin Mazur/Getty)

10. Taylor Swift: Bleach blonde hair and all, T-Swift created some buzz with this particular Coachella-bound getup in 2016. Maybe it was the air of mystery captured in this snap or perhaps it was her rad bomber strewn with a lightning bolt motif that had everyone double-tapping.

11. Hailey Baldwin: Slay, girl, slay! Hailey Baldwin proves yet again that she’s one of the kewl kids with her Coachella uniform consisting of a crop top, denim cutoffs, and — wait for it — rhinestone-encrusted fishnet stockings. Now, that’s an entrance.

12. Kate Bosworth: Nobody — we mean nobody — does festival fashion quite as exquisitely as Kate Bosworth a la Coachella 2015. Here she dresses up a plain white dress with an embroidered tribal jacket and a studded mini bag. Ah-mazing. (Photo via Rachel Murray/Getty)