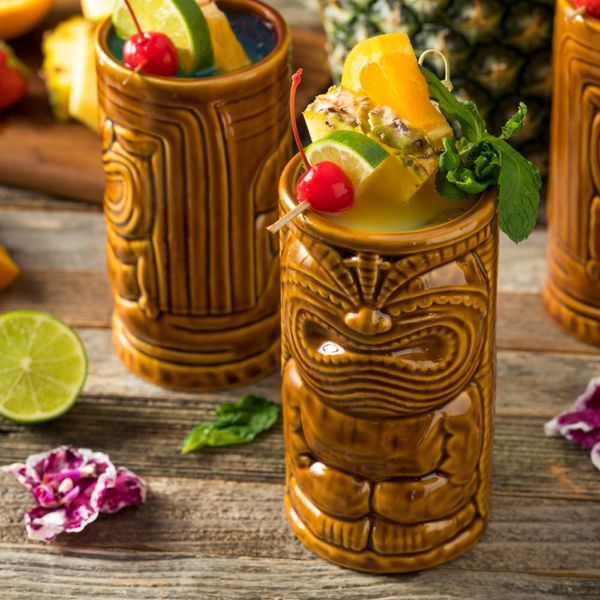 There’s no denying the power of the mai tai. After a huge bout of popularity in the 1950s and then a lively resurgence in 2000s, the rum-soakedtiki bar is back — and in a BIG way. A handful of old-school examples of Polynesian-styled watering holes never went away, but they now keep company with all sorts of new incarnations of the genre found all over the nation. “You could try to draw parallels to the original rise of tiki escapism of the Cold War 1950s to the current economic and political climates,” tiki expert and author Otto von Stroheim states about the new resurgence. As one of the promoters of Tiki Oasis, a wildly popular annual tiki convention in San Diego, he thinks there’s even more to it. “Really, I think tiki style is a celebration of happiness. Simply put, people enjoy being happy.”

You have to admit, sitting in what seems like a tropical paradise while sipping on a carefully crafted summery cocktail does bring on those happy-go-lucky vibes. We don’t think this current round of tiki love shows any signs of slowing down, and von Stroheim agrees. “The cocktail revolution has embraced tiki drinks in a huge way. This has solidified new tiki bars as being well-rounded, respectable drinking establishments with a theme rather than just a kitschy gimmicky environment with a one-visit appeal. Tiki bars have extensive drink menus that tell a story and require repeated visits to conquer.” Looking at these nine tiki bars here, we think we have to agree.

Three Dots and a Dash

Tucked away in an alley near the North Side of Chicago, you’ll find Three Dots and a Dash, a tiki bar that takes pride in their high-quality cocktails. Seasonal fruits, juices that are cold-pressed daily, and fancy syrups — from orgeat to falernum — made by hand are featured in their whimsical list of cocktails. Not only are their drinks original — the Painkiller, Cobra’s Fang, and Rock Out with Your Conch Out to name a few — but there also are crazy-cool group drinks like the Treasure Chest (served in a treasure chest, naturally), which serves 6-8. You won’t want to pass up on taking home one of their unique mugs, either. (Photo via Anjali Pinto Photography/Three Dots and a Dash)

Trader Sam’s Grog Grotto, Orlando, FL: The magic of Disney isn’t just in their parks: It seeps into their bars too. Trader Sam’s in Anaheim is located at the Disneyland Hotel; in Orlando, it’s at the Polynesian Resort. While both are prone to long lines, they’re worth it the wait. Whimsy can be found in every corner of both of both locations, from mysterious notes pinned to the walls to special effects triggered by drink orders (make sure to order the Krakatoa Punch or the Uh Oa! for an unforgettable surprise). Their unique tiki mugs have gathered a cult-like following, with Facebook groups dedicated to them and an active resale community on eBay. (Photo via David Roark/Disney World Resorts)

Smuggler’s Cove isn’t just a bar: It’s a lifestyle and a James Beard award winner for their self-titled coffee table book packed with history and recipes. The bar itself is an intimate two-floor oasis boasting the largest rum selection in the United States and offering a wide array of original and historical cocktails. The seafaring themed watering hole has a diehard fan base; those brave enough can attempt to become a Voyager of the Cove, a feat achieved by trying all 80 or so drinks on the menu (those with strong enough livers receive an exclusive gift and merit badge). (Photo via Kelly Puleio)

New to the NYC bar scene is The Polynesian at The Pod Hotel, the brainchild of bartender Brian Miller (pictured above), a “globetrotting tiki apostle and self-described pirate.” At the chic and sleek bar, menu items include concoctions such as the Vaya Con Tiki, Jungle Booby, and the Reggae Bus, “a savory unicorn that will make ev’ryting irie.” For group drinks, check out the Humuhumunukunukuapua’a, a blue-hued drink served in a fishbowl complete with little plastic fish. (Photo via The Polynesian)

The Tonga Room has delighted drinkers at the Fairmont Hotel for generations. Originally designated as the hotel’s indoor plunge pool, it was transformed in 1945 by Metro Goldwyn Mayer’s leading set director Mel Melvin into the tropical paradise that has aged very very well. One of the most amusing elements of the bar is the faux storms that spontaneously erupt throughout the night. It’s popular with locals and tourists alike, and a destination for many — even the late Anthony Bourdain was a fan, calling the Tonga Room “the greatest place in the history of the world.” (Photo via the Tonga Room)

While Oregon is known more broadly for its crafts beers, it’s also home to Hale Pele, AKA the “House of the Volcano Goddess.” Their classic cocktails are made with fresh juices, premium spirits, and house-made syrups. Of course, the Hale Pele also offers group drinks complete with paper umbrellas, fruit slices, and occasionally fire! (Photo via Hale Pele)

Fort Lauderdale, famous for fun, sun, and beaches, is also known for being a major destination for spring break celebrants. So, of course, they would have a thriving tiki bar scene. Mai-Kai has been around since 1956, so they have first-generation knowledge of the tiki phenomenon. Designed to look like a Polynesian village, Mai-Kai features waterfalls, lagoons, tropical gardens, and plenty of tikis (of course). Along with a busy restaurant and the rum-soaked Molokai Bar, they also host the Polynesian Island Revue, a performance inspired by the cultures of Tahiti, Aotearoa/New Zealand, Samoa, and Hawaii. (Photo via Mai-Kai)

, San Diego, CA: One of the hottest new entries into the annals of tiki bar-dom is False Idol, a beautifully curated bar hidden behind another bar, Craft & Commerce. A totally immersive experience, False Idol is decorated with tikis, skulls, colorful glass buoys, and historical ephemera. With cocktails like the Panther’s Fang (rums, honey, orange, lime, and sparkling water) and Demerara Dry Float (Demerara rum, cherry liqueur, passion fruit, and fresh lime) and their own Spiced Pineapple Pilsner (a partnership with Modern Times Beer), you’ll want to stay a while to soak it all in. (Photo via False Idol)

Rather than being textbook tiki, San Francisco’s brand-new Last Rites is more “Polynesian noir” then festive luau. The skull-embellished saloon, which opened this past June, gives the appearance of existing within the carcass of a crashed plane. The whole thing gives off a vibe that’s way more Indiana Jones than Moana. They even have a drink called Jock Lindsay (for Indiana Jones’ freelance pilot pal), which joins innovative cocktails such as the Hetch Hetchy (made with green chili vodka) and the Marine Layer (served in its own cloud of fog). (Photo via Last Rites)
Sunny Chanel
Sunny Chanel is a freelance writer as well as the founder of the whimsical site Wonder and Company. When this proud San Franciscan isn't writing, working on her fixer-upper or doing crafts, she is playing dress up with daughter and planning her next trip to Disneyland.
2018 trends
Travel
2018 trends Drink Food Trends
More From Travel