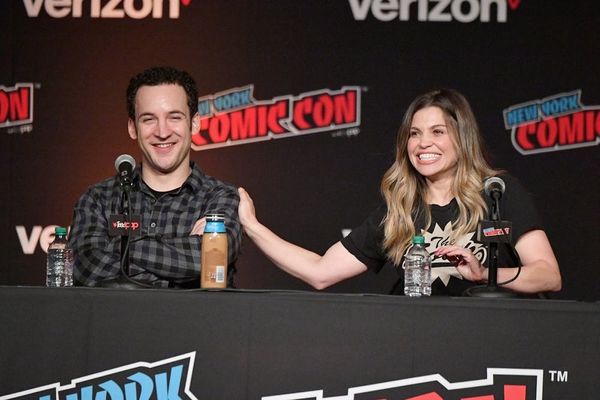 Calling all Boy Meets World fans! Danielle Fishel, Ben Savage, and Will Friedle reunited at New York Comic Con on Friday, October 5, to celebrate the show’s 25th anniversary, and they dropped some seriously exciting news during their panel: Fishel and Friedle are working on a secret project together!

The ’90s stars, who previously reunited on Disney Channel’s Girl Meets World, which was canceled last year, just can’t seem to get enough of each other. As Entertainment Weekly reports, when an audience member at NYCC asked Friedle about his voice-over work, the 42-year-old said that he was driven to off-camera gigs due to anxiety, but that he “pulled out of that because of Girl Meets World.”

Then he dropped the ultimate bombshell: “Now we’re getting back on track [and] Danielle and I are maybe doing something in the future. We’ve got cool stuff coming down the line.”

What could that secret project be? Friedle wouldn’t reveal any additional details, but Fishel did jump in to tease a bit more information, telling the crowd, “Yeah, we’ve developed an on-camera show that we are shopping currently.”

And the exciting news didn’t end there. When fans pressed for yet another reboot, one that would feature all three original characters, and one audience member quipped that they should sign on for Grandma and Grandpa Meet World, Savage proclaimed, “I think that some people have wanted a show about Cory and Topanga and Eric now. Which we could still do.”

He also reflected on the end of the original series, admitting it still makes him emotional. “When Mr. Feeny said ‘Class dismissed,’ which still gets me, and then we wrapped, this huge wave of emotion went over me,” Savage said. “Like, ‘Wait, wait no! One more take!’ I’ll always remember that moment. It was like someone was closing the door on our childhood — but in a good way! It definitely left an impact.”

Do you want to see a Boy Meets World reunion? Tweet us @BritandCo.

Barbara Pavone
Barbara Pavone is a pop culture-obsessed writer based in beautiful (but ridiculously cold) Montreal, Canada. When she's not working, she's sipping on a Pimm's Cup and daydreaming about her celebrity hero, Saint West.
Nostalgia
Pop Culture
Nostalgia
More From Pop Culture