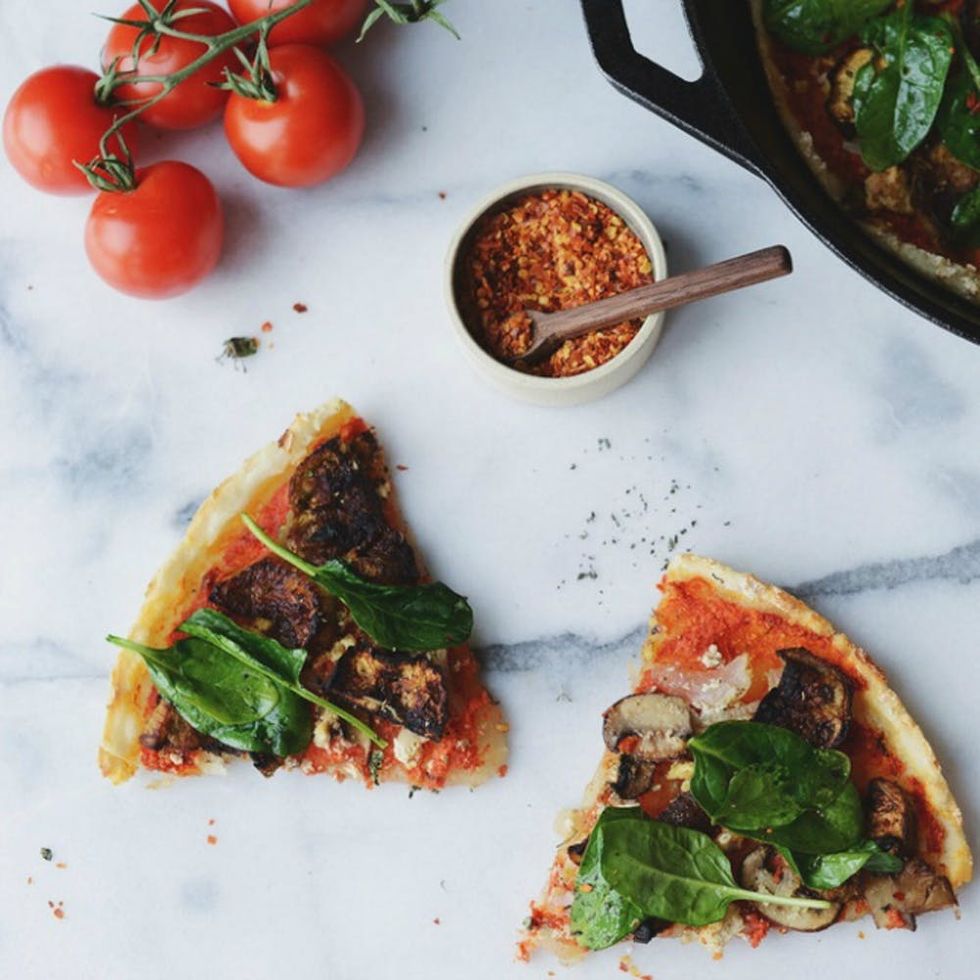 Whether you’re going gluten-free, grain-free or totally Paleo, one of the first things you’ll notice is all the recipes appearing on Pinterest that promise to taste *just like* former comfort foods, but sadly… don’t. Has anyone actually tastedcauliflower pizza crust? It’s like, not even. Well, here comes CASSAVA to the rescue! Here are 19 former grainy goodies you can make using the South American root vegetable (also known as yucca). And this time, your tastebuds will definitely do the happy dance!

1. Yeast-Free Paleo Sandwich Bread: Finally, a loaf of delicious Paleo sandwich bread that grain-free foodies can enjoy. This amazing loaf bakes up so well, with a nice crust and crumb that is decidedly BREAD-like. (via Cook It Up Paleo)

2. Gluten Free Cassava Flatbread + Pizza Crust: Inspired by Brazilian *bammy* bread, which is naturally made with cassava, this pizza crust rolls out thin and emerges from the oven brown and crisp on bottom and chewy on top — just like the real thing. For everyone who has given up grains, cassava is heaven-sent. (via Fare Isle)

3. Cassava Flour Tortillas: These cassava tortillas are gluten-free, grain-free, vegan and Paleo-friendly. They’re perfect for tacos, fajitas, wraps, you name it. Click through for a step-by-step video so approachable, it feels like you’re cooking with a friend in your kitchen. (via Downshiftology)

4. Herbed Cassava Tortilla Chips: One of the things many people miss when adopting a real foods diet are the little munchy-crunchies to, say, scoop up the guac and other dips. These crispy little salty snacks will totally satisfy those cravings — and unlike store-bought, these have no scary chemical additives. (via Downshiftology)

5. “Cool Ranch” Spinach Tortilla Chips: If you thought flavored tortilla chips were off your party menu, think again. Take these Mock Doritos to your next tailgate and you’ll be everyone’s BFF. (via Fork and Beans)

6. Grain-Free Saltine Crackers Made With Cassava Flour: These crackers are super easy to make and they bake up crisp in less than 10 minutes. They’re yummy with a creamy slice of Brie or with sweet or savory toppings, but they’re absolute nirvana topped with just a thick layer of grass-fed butter. (via Health Starts in the Kitchen)

7. Ultimate Seed Crackers: These seed crackers are so crunchy-good, they’ll have you dreaming up new things to dip them in. The recipe calls for garlic, thyme and basil, but you can add any herbs or spices that your little taste buds desire and they’ll be absolutely awesome. (via Downshiftology)

8. Paleo Soft Pretzels: Chewy, bready and slightly sweet, with a crisp, salty crust, these soft pretzels are sheer perfection. If you’re cooking for someone with an autoimmune condition — maybe it’s even you — click through for a yeast-free AIP version that’s equally yummy. (via Cook It Up Paleo)

9. Grain-Free Beef Empanadas: This is AH-mazing street food like you thought you’d never taste again (grain-free). Go on and fill ’em up with savory meats, spicy cheeses or even sweet dulce de leche. It’s all good! (via Foraged Dish)

10. Cassava Fries With Spicy Sriracha Mayo: If your Paleo plan shuns potatoes, these yucca fries are just the thing to crush those French fry cravings. Tossed with olive oil, roasted garlic and thyme, they’re baked until crisp on the outside and tender on the inside. In a word: Yum. (via Little Kitchen Big World)

11. Paleo Onion Rings: Believe it! Yes, there is such a thing as a grain-free *batter* that puffs up as golden and crispy as every pub version you’ve ever loved. You SOOOO need these in your life right now. (via Primal Palate)

12. Grain-Free Naan Bread: One of the wonderful things about going Paleo is all the cooking-with-coconut-milk Indian cuisine you’ve been introduced to. All that’s missing is the naan bread — until now. Better make a double batch, because everyone in the house is going to want seconds. (via Cotter Crunch)

13. Cassava Flour Biscuits: Sometimes you just yearn for a biscuit to hold all that luscious grass-fed butter. Slather these babies as they come hot out of the oven, or make yourself the bacon and egg sammy of your dreams. (via Health Starts in the Kitchen)

14. Banana Bread Bites: If you thought coffee break treats were a thing of the past, think again. Bake a few extras to take in your lunch, then break them out when the four o’clock energy slump hits. (via Food by Mars)

15. Perfect Paleo Pancakes: This one’s for all the nut-free folks in the house. Cassava is even better than almond flour for creating just the kind of fluffy pancakes you swoon over. Even the non-Paleo peeps in the house will gobble them up quickly. (via Adventures of a Sick Chick)

16. Gluten-Free Cinnamon Roll Waffles: If a cinnamon roll and a waffle had a baby, it would look like this. This mash up of everyone’s two fave breakfast sweets is a crunchy and cinnamon-y delight. (via Hold the Grain)

17. Grain-Free French Crêpes: You will be blown away by how easy it is to make crepes using cassava flour. Whether you like them sweet or savory, this recipe is the holy grail of gluten-free baking and cooking. (via Prepare & Nourish)

18. Grain-Free Gluten-Free Hand Pie Pop-Tarts: Get ready to hop into the foodie time machine. These super flaky, buttery and delicious little pies will take you back. They’re even better than the Pop-Tarts you remember and they’re waaaaaay healthier, which is so good because you’re, like, a grown up now. (via Kyra Bussanich)

19. Cinnamon Sugar Churros (Paleo-Friendly): If there’s anything more delicious than a homemade churro, we haven’t heard about it. This recipe calls for a Paleo cinnamon-sugar topping, but you could just as easily melt a wedge of dark chocolate for a quickie dipping sauce. (via Primal Palate)

If you HEART these cassava versions of all your fave foods, follow us on Pinterest for more.

Sally Jones
Sally Jones is a writer and editor living in New York City. She has worked at many websites including iVillage, Ladies Home Journal, More, Parenting, Cosmopolitan, The Knot and YourTango, in jobs ranging from editor to COO. Renovation and interior design are her unhealthy obsessions hobbies. She has renovated every home she's lived in, including the rentals, and like... whoa, who does that? You can catch her at her blog Renov8or.
Gluten-Free
Healthy Eating
Gluten-FreeHealthy RecipesPaleorecipe roundup
The Conversation

50 Journal Prompts To Dig Deep Into Your Relationship

15 Light Jackets To Throw On This Fall

What To Expect This Virgo Season, According To Your Zodiac Sign

Meet The Founder Behind A New Clean Fragrance Brand

Sip This Flavorful Mint Lemonade For An End-Of-Summer Refresher