16 Celebs Who Proved Amazing Halloween Makeup Can Make Your Costume 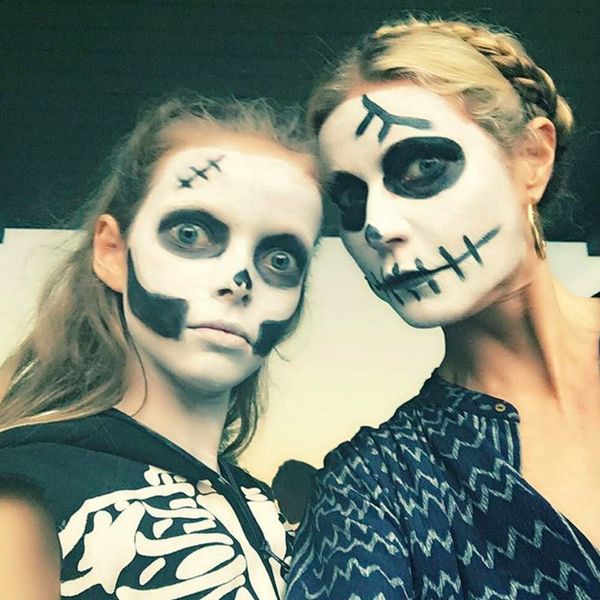 This. Weekend. Was. Epic! It was a super spooky Halloween filled with creative costumes and next-level makeup (which was sometimes better than the costumes themselves). Think of every classic Halloween costume in the book, add a slightly spooky factor and then top it off with rad makeup skills and you’ve got this list ;) Expertly painted faces and super detailed costumes left us wishing that this holiday was celebrated more often so we could be constantly inspired by these looks. Take a look at some of our fave celeb Halloween makeup looks from 2015:

1. Perrie Edwards: This ice queen look was one of the more intricate and legit looks we spotted over the weekend. From the silvery-blue hair to the white eyes + brows, Perrie totally killed this look. We also love the blue sparkles on her neck! (Photo via @perrieeele)

2. Katy Perry: Katy donned one of our fave Halloween looks of the year with this creative makeup that will leave you doing a double-take. Iridescent, sparkly lashes were the main attraction when her eyes were open, but once she closed them, we saw new eyes appear on her eyelids. Those glam tears are also super cool. (Photo via @katyperry)

3. Lauren Conrad: Normally cute and classy, Lauren Conrad really switched things up this weekend with her Halloween makeup and went the creepy route. We have to say, we love the slightly spooky take she took on her classic cat eye — it totally works! (Photo via @laurenconrad)

4. Jennifer Lopez: Jennifer Lopez took the spooky skeleton to a whole new level this weekend. The shadows on her face give her face a sunken-in contour while her light-eyed contacts majorly add to the creep factor. (Photo via @jlo)

5. Kandee Johnson: Leave it to a true makeup queen to paint her face in a completely epic way. A black and white base with pops of teal and pink made her cartoon character come to life. (Photo via @kandeejohnson)

6. Ashley Benson: Ashley Benson got in the Halloween spirit and went dark, vampy and totally pulled it off. The Pretty Little Liars star rocked black-as-night lipstick (remember when I did that, too?) and super smudgey black eyeliner to complete her look. (Photo via @itsashbenzo)

7. Kylie Jenner: Of course Kylie Jenner showed up to Halloween shindigs looking completely on point in her ice princess costume. Her sparkly eyeshadow is eye-catching and can really only work on a holiday like Halloween. (Photo via @kyliejenner)

8. Poppy Delevingne: Step aside Harley Quinn because Poppy’s giving you a run for your money. Kinda. She made this scary costume look cute — we’re thinking the pigtails have something to do with it ;) (Photo via @poppydelevingne)

9. Hilary Duff: Keeping things cute and simple was Hilary Duff’s motto this Halloween. Instead of going all crazy with her makeup, Hilary opted for the classic kitty look and looked adorable. (Photo via @hilaryduff)

10. Gwyneth + Apple Paltrow: Matching mother/daughter costumes are always cute, but they can be scary, too. Have fun painting each others’’ faces and even consider dressing up in identical outfits ;) (Photo via @gwynethpaltrow)

11. Nicole Richie: Nicole Richie totally nailed the creepy Halloween thing — this is an on-point Jack Skellington costume for sure! While it’s scary, it’s also simple to replicate on your own. You’ll just need a healthy dose of white + black face paint. (Photo via @nicolerichie)

12. Shay Mitchell: Dark, vampy and gothic is what Shay was going for this year and she definitely nailed it. Smokey, slightly red-rimmed eyes, pronounced cheekbones and blood-dripped lips set her costume apart from the rest. (Photo via @shaym)

13. Gwen Stefani: We almost didn’t recognize Gwen! The dark hair, heavy lashes and drawn-on freckles totally transform her into the gory cowgirl she dressed up as. (Photo via @gwenstefani)

14. Ruby Rose: Half terrifying skeleton, half gorgeous gal. Ruby Rose pulled off both looks effortlessly over the weekend. The sunken-in look of her cheekbones on the skeleton side is seriously legit. (Photo via @rubyrose)

15. Taraji P. Henson: Meow! Taraji’s cat makeup was so detailed: Her eyelids were painted with cat-like spots, she had the classic nose + whiskers and added fangs. Don’t mess with this kitty. (Photo via @tarajiphenson)

Which of these Halloween makeup looks was your fave? Share your thoughts in the comments below.

Beth Wischnia
You can typically find this Texan writing, trying on a new lipstick, gabbing with her identical twin sister or volunteering at the local animal shelter. She finds inspiration from rosé, beauty products, Tex-Mex and cats.
Celebrity Makeup
Makeup
Celebrity Makeup Halloween
More From Makeup