15 of the Best Celebrity Halloween Costumes from Last Night 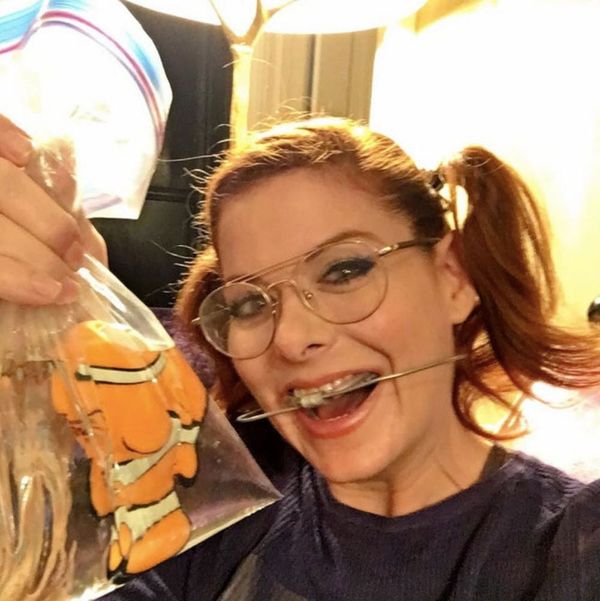 Happy post-Halloween! Hope last night was one for the books for you + your pals. Whether you guzzled up witch’s brew punch or danced the night away dressed as a skeleton, your night deserved to be filled with the best that Halloween has to offer. The same goes for celebrities: Their costumes were seriously on point this year and you can tell they had a great time thanks to their Insta pics. Yesterday, we showed you how a handful of stars got dressed up the day before Halloween, so to round out the holiday, here are 15 of our fave celebrity Halloween costumes from last night.

1. Shay Mitchell as Poison Ivy: Pretty Little Liars star Shay Mitchell looked gorgeous as Poison Ivy last night. The striking contrast between the bright red color of her hair and the green in her costume was really pretty — and it doesn’t hurt that her smokey eye was perfect. (photo via @shaym)

2. Keke Palmer as Aliyah: Hands down, this was one of our favorite celeb costumes because it’s such a legit throwback to Aliyah and her iconic “Try Again” video. Keke Palmer looked stunning as she emulated the late songstress with her hair super straight and sleek, wearing a bedazzled bikini top and matching choker necklace. (photo via @kekepalmer)

3. Heidi Klum as Jessica Rabbit: Leave it to Heidi Klum to completely kill it with her Halloween costume yet again. This year, she chose the sexy character, Jessica Rabbit and used prosthetic makeup to literally transform herself. Go Heidi! (photo via @heidiklum)

4. Katy Perry as Mic Drop: This LOL-worthy costume from Katy Perry is pretty creative. She’s dressed up as a dropped mic. This would be funny at any Halloween party, but especially if you decide to just drop on the floor and really bring your costume to life for party guests’ enjoyment. (photo via @katyperry)

5. Kourtney Kardashian + Kids as Superheroes: Kourtney Kardashian has killed it with Halloween this year — her and her family’s costumes just keep getting cuter and cuter. Keeping with the superhero theme, Kourtney, Mason, Penelope and Reign all dressed as different characters yesterday. Seriously can’t decide who’s cutest! (photo via @kourtneykardash)

6. Tamera Mowry as Mary Poppins: Tamera made Halloween a family affair and had her whole clan dress up as characters from Mary Poppins — it was so cute! Tamera was Mary Poppins, while her husband, played the chimney sweeper Burt. Their little one didn’t get in on the Mary Poppins action but did dressed as a character from The Incredibles. (photo via @tameramowrytwo)

7. Gigi Hadid as Sandy from Grease: Gigi broke out her skin-tight black clothing and made a great bad Sandy from Grease. Her curly blonde hair, smokey eye makeup and red lip make it a knockout costume. (photo via @gigihadid)

9. Nicki Minaj as a Queen: We kinda saw this one coming. Nicki Minaj dressed in her Halloween best and rocked a queen costume this year. A tutu, sparkly top and crown (duh) completed her look. (photo via @nickiminaj)

10. Taylor Swift as Olaf: Taylor gave her fans a Halloween treat at her concert last night when she dressed up as Olaf. It’s also a DIYable getup, which means that some of us may already be thinking about what to be next year for Halloween :) (photo via @taylorswift)

11. North West + Penelope as Elsa + Anna: Squeeeal! North West and Penelope Disick are obviously big Frozen fans, and got into the Halloween spirit by dressing up as their favorite characters, Anna and Elsa. These cousin besties can’t get any cuter! (photo via @kimkardashian)

14. Grace Dunham as Guy Fieri: Lena Dunham’s sister obviously shares a sense of humor with her famous sis because this costume is hysterical. That being said, it’s hard to not look really funny if you’re dressing up as goofy Guy Fieri. Who’s waiting for a Grace vs Chrissy Teigen walk-off? (photo via @lenadunham)

: This. Is. Adorable! Neil Patrick Harris and his family dressed up as Han Solo, Princess Leia, Luke Skywalker and Obi-Wan Kenobi and completed their outfits with a seriously legit pic. (photo via

Which of these celeb costumes is your favorite? Share your thoughts in the comments below.