Fall Hair Trend: 7 Celebs Who Went from Blonde to Brunette 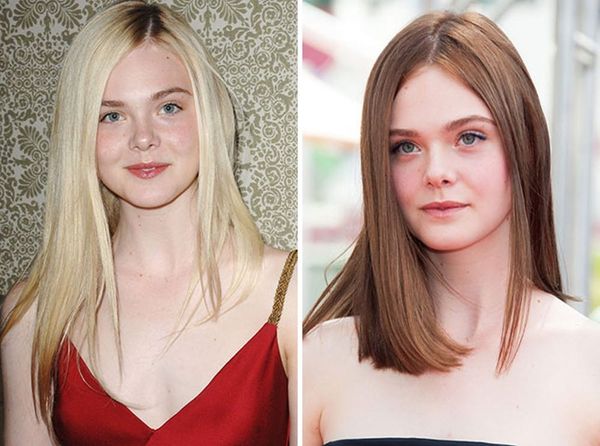 If you needed even more proof that Elle Fanning was a major red carpet risk taker (remember, this is the girl who wears red eye shadow and triple-platform sandals like it’s no big thing), the 16-year old actress stepped out at the premiere of The Boxtrolls debuting freshly dyed brown hair. True, it’s not the bright pastels of Demi Lovato or the jaw-dropping gray of Dascha Polanco, but her new chestnut strands are a big change from the light blonde locks we’re used to.

For a transition THIS major, Elle’s color refresh — not to mention that new blunt cut — is incredibly chic. And it’s making *us* blondies strongly consider doing the same. So as we plot a potential color shift of our own with our hair stylists (remember blondes, make sure to request a strand test before you paint on the all-over color!) we’re scoping out more light-to-dark hits (and some misses :/) from seven other celebs who went to the dark side.

1. Drew Barrymore: We’ll kick things off with another dark dye job that deserves a standing O: Drew Barrymore’s mahogany locks. The shade is so rich that it almost makes us forget that she’s always been one of our top blonde muses.

2. Emma Stone: When Emma went blonde, it worked — some of her most memorable red carpet moments happened when her hair was at its lightest. But it only took the first dye back to her darker copper to make it clear that red is indeed her strands’ soulmate.

3. Mary-Kate Olsen: Since it seems not a day goes by that MK does not wear something black, it only seemed appropriate when the Olsen twin stepped out with goth-y locks. Against her dark, sophisticated wardrobe, the hefty shade only adds to her mystique.

4. Carey Mulligan: We knew we fell in love with Carey’s cropped chop, but we didn’t know we were so smitten with her hair color until she darkened her ‘do to match what’s actually her natural shade. Maybe it’s just the overly shaped eyebrows, but the color seems to take away from her effortless grace. Once you’ve found a chic signature look, just stick with it.

5. Nicole Richie: Before the blue, and even prior to the purple, Nicole Richie was blonde with the beachy waves to match. Then came the dark brown, and while it definitely made her features pop, we always knew Nicole could do better when natural hues are involved. Turns out we were right.

6. Cameron Diaz: Cameron’s light-to-dark transition really IS like day and night. But the OMG-worthy dye job only lasted for what seemed like a flash, when she went back to blonde (admittedly, to our delight). If Cam ever wanted a do-over, we would love to see her don an oaky brown that would go with (instead of clash against) her skin tone.

7. Beyoncé: Beyoncé’s decision to dye her asymmetrical bob platinum might have been one of the most major hair moments of the year. But even the Beygency can’t deny that the caramel tones in her On the Run hair are flawless.

Which celebrity blonde-to-brunette gives you the most hair envy? Tell us in the comments below.