Is a Cheetos Fashion Line Coming Your Way Soon? 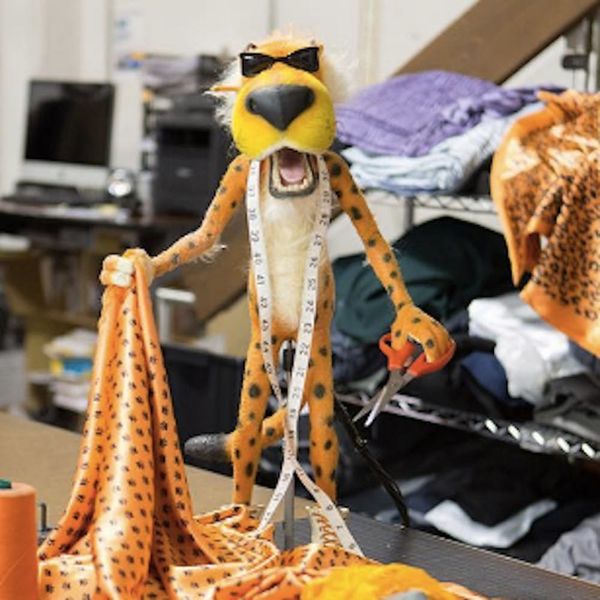 Cheetos is on a roll with innovating recently, introducing new flavors like Flamin’ Hot Ranch and Cheddar Jalapeño. The snack company is here to blow your mind again (and no, it’s not due to a Flamin’ Hot pizza pairup); this time around, Cheetos is maybe doing it with clothing. Huh?!

Easter clothing is so serious and dull. So I think it's time I gave Easter clothing a makeover with my new Spring Snack Line. Visit Betabrand.com/Cheetos to learn more. Link in profile.

The brand’s official “spokescheetah,” Chester Cheetah, is apparently teaming up with retail brand and crowdfunding source Betabrand to launch a line of Cheetos-inspired goods for Easter. These are far more than just logo hats and tees, though, friends. Chester has really outdone himself, designing garments that are not only kinda cute, but fully functional (particularly when it comes to eating Cheetos) as well.

The Snack Stasher Dress is a sleeveless floral print dress accentuated with a giant bow — but the bow is where the magic happens. It has a secret compartment that opens like a clamshell for — you guessed it! — snack stashing.

For men, there’s The Lapkins, an orange and white striped pair of seersucker trousers with built-in detachable napkin panels. For anyone who has ever gotten cheesedust on his/her hands, and had nothing to wipe on, this is kind of genius, really!

The collection features accessories too. If you need some shade from all that Sunday morning sun, the Parasol Pocket is here for you. And naturally, it features hidden pockets in the underside for your belongings (which presumably include Cheetos).

Other brilliant options include a pair of Russian-nesting-doll-like gloves that peel off up to three layers for when you don’t want to get your fingers, well, orange, a muffler to hide the crunch of the treats you’ll be hiding in it, and a snackscot with its own pocket for Cheetos.

Though the items aren’t guaranteed (they would go on to become part of a crowfunding project to get them made if chosen), you will get 30 percent off the item you vote for should it become available for purchase, so it’s definitely worth a shot!

Voting is open now, so head on over to Betabrand now and pick your fave!

Which Cheetos-inspired outfit did you vote for? Tell us over @BritandCo.

Nicole Briese
Nicole is the weekend editor for Brit + Co who loves bringing you all the latest buzz. When she's not busy typing away into the wee hours, you can usually find her canoodling with her fur babies, rooting around in a bookstore, or rocking out at a concert of some sort (Guns N' Roses forever!). Check out all her latest musings and past work at nicolebjean.com.
Style News
More From Style News