All the Best Cosplay from Disney’s D23 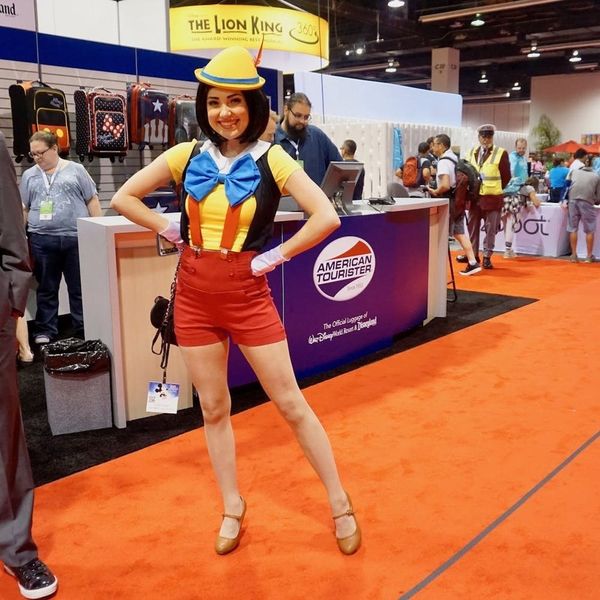 There's a ton to experience at Disney's D23Expo — the biennial convention for Disney fanatics. But one of the best reasons to attend is to witness all the crazy cool cosplay masterpieces that you'll see roaming around EVERYWHERE. We're talking, serious Halloween goals. Best of all, every single one of them is inspired by Disney, from a trio of punk princesses to a Dole Whip Float. Check out these 45 ensembles for a bit of inspo for your next Halloween costume.

And you don't have to wait until Halloween to bust out your own Disney cosplay magic; on select nights (beginning September 15 to October 31), Disneyland will host Mickey's Halloween Party. This is the ONLY time when adults can come into the park in costume (plus there's candy, lots and lots of candy).
The Big Thunder Mountain Ensemble: THIS COSTUME IS INSANE. You can't tell by the photo, but a train actually travels down the costume. It's BANANAS.
The Dole Whip Float: Doesn't she look delicious?!?
Before Version of Cinderella: Most opt for the glammed-up version of Cinderella, but not this girl. Plus, she gets mad bonus points for the bucket that seconds as a purse!
Over-the-Top Lumière: This Lumière cosplay honoring Beauty and the Beast is LIT!
The couple from Atlantis: Among all the princesses, we spotted this couple dressed as Milo Thatch and Kidagakash Nedakh.
Wreck-It Ralph Car: This Vanellope von Schweetz cosplay is OFF THE HOOK. The car actually works!
The Aladdin Couple: Their subtle ode to Aladdin and the Genie is totally on point.
Beauty and the Beast Family Affair: Belle brought along her inventor dad and Mrs. Potts.
Two Versions of Te Fiti: We love how Moana is bookended by the two incarnations of the goddess Te Fiti.
The Sanderson Sisters: For a trio of BFFs, the sisters from Hocus Pocus is a wickedly awesome choice.
Pin-Up Princesses: If you and your crew are feeling saucy, then you might embrace the sexy side of classic princesses, if you dare.
The Pinocchio Crew: If you have a bevy of buddies, there are plenty of characters in this Disney classic to dress up as, from the Blue Fairy to Honest John.
Cute Pinocchio: And if you wanna sass up your puppet boy, you totes can.
Wedding-Ready Jessica Rabbit: This bridal version of Jessica Rabbit from Who Framed Roger Rabbit is everything.
A Twisted Take on Alice in Wonderland: This duo is making Tim Burton proud with their Alice in Wonderland x Nightmare Before Christmas mashup.
The Haunted Mansion Mama: OMG, you guys! How adorbs is this homage to the Haunted Mansion portraits and her little cast member?
Mr. Toad and BFFs: This is what happens when your group Disneybounding takes a wild ride.
Mr. and Ms. Pixar: Yasssssss! The couple opted to honor two of Pixar's iconic symbols — the lamp Luxo Jr. and the Luxo Ball.
Tinker Bell Rebel: This Tink x Star Wars hybrid is so ready to take on the dark side.
Ms. Banks, Suffragette Style: There were plenty of Mary Poppins strolling around D23, but we're particularly fond of this Ms. Banks in her full suffragette ensemble.
The Redhead: The Redhead from Pirates of the Caribbean will soon be unchained as part of the bride auction in the attraction; here she is celebrating her freedom!
The Mickey Mouse Club: This family of four totally got in the spirit of things with their old-school get-ups. We love that mom went with a Snow White theme.
Ursula and Ariel: Look closely at the Ursula bride; yup, that is a starfish on her face. Amazing.
I Dream of Princesses: Pocahontas, Jasmine, Aurora, and Ariel all went for a I Dream of Jeannie vibe, and it's a mash-up that totally works!
Star, Marco, and Pony Head: If you're not watching Disney Channel's Star Vs. the Forces of Evil, you're missing out (and you won't get how AMAZING these outfits are).
Tiki Room Birds: Free from their perches at the Walt Disney's Enchanted Tiki Room, these two lovely birdies made the expo scene.
Pixar Pair: Pixar films collide when Darla from Finding Nemo meets Zorg from Toy Story.
The Royal Disney Treat Duo: This is sooooooo sweet!
The Crew from Emperor's New Groove: Best of all, these costumes look totally comfy.
Punky Princesses: This trio of Princesses apparently found their local Hot Topic and got a whole new look.
An Adorable Bellweather: Simple yet effective, this Zootopia Disneybounding is on point.
Aww, It's the Aristocats: This Aristocats crew is purr-fect.
The Dapper Dames: To know the Dapper Dans from Disneyland's Main Street is to love them. These girls apparently do.
The Dumbo Ride: This girl figured out how to ride Dumbo 4ever! GOALS.
Real Life Dutch Doll: The Dutch doll from It's a Small World escaped!
Pirate Fairies: They're pirates, they're fairies, they're pirate fairies (and they're also adorable).
The Who Framed Roger Rabbit Couple: Upside: They look adorable. Downside: You have to be handcuffed to your significant other all day (or maybe that actually IS the upside).
Coconut Monster: There were plenty of Moanas roaming around, but only one Kakamora coconut monster.
Big Ideas from Pixar Shorts: La Luna, Birds on a Wire, and Paper Man were represented by this Pixar lovin' crew.
Old School Captain EO: Michael Jackson may be gone, but his spirit is alive in this Captain EO costume.
Fairy Godmother Jedis: These Star Wars x Sleeping Beauty mashups are ready to fight all the evil.
Spidey Ariel: This is what happens when Ariel's spidey sense is activated.
Channeling Up: All you really need are some balloons and a pith helmet, and you're set.
Peter Pan Air Stewardess: Now this is an airline we'd be more than happy to fly with.
Fennec Fox: One of the best things about dressing up as Fennick from Zootopia is that you can basically wear a onesie. The bad part is that you have to carry around a massive popsicle.

Which cosplay do you love the most? Tell us over @BritandCo!

Which cosplay do you love the most? Tell us over @BritandCo!

Sunny Chanel
Sunny Chanel is a freelance writer as well as the founder of the whimsical site Wonder and Company. When this proud San Franciscan isn't writing, working on her fixer-upper or doing crafts, she is playing dress up with daughter and planning her next trip to Disneyland.
Disney
Creativity
Disney
More From Creativity