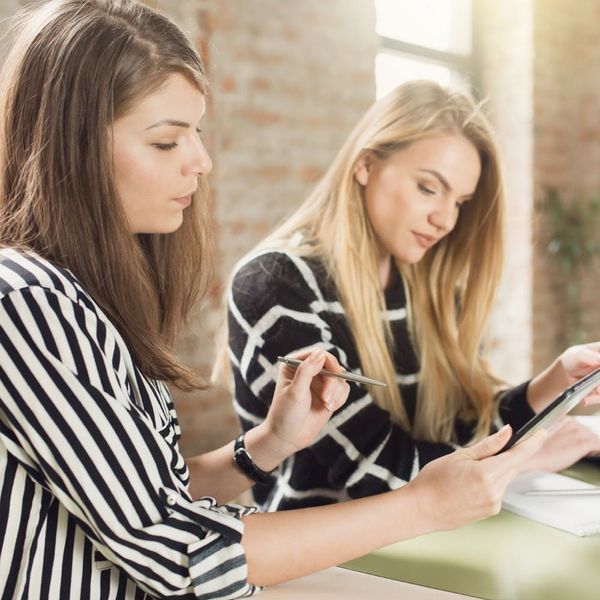 October’s off to an auspicious start and you’re cranking out the to-dos — just don’t get too ahead of yourself. Before you sign away all your freedom, be sure to pencil in some time to admire the fall foliage (among other fall bucket list traditions). ‘Tis the season to gather your friends for a trip to the pumpkin patch or a haunted hayride. Channel your inner hostess with the mostess with these DIY fall drink and dessert bars and scroll down to see what the stars have in store for you in this week’s AstroStyle horoscope.

Wake up on the wrong side of the bed this morning? As it turns out, workplace drama isn’t the only thing bringing you down. A little feng shui can do wonders for the soul — even something as small as moving your bed to the opposite side of the room can prove to be game-changing. But don’t stop there! Use this time to spruce up your fall decor with seasonal pumpkins and ghouls.

Read This: Stress begone! We’ve got 15 mindful ways to make your home more zen. Take note: Natural lighting is everything. (Photo via My Unfinished Home)

Cue the artistic genius: Some time spent fine-tuning your métier will not only give you peace of mind, but it’ll keep the Monday blahs away. Not just restricted to painting and drawing, an early-morning journaling sesh is just the thing to get you out of a creativity rut (who knows when an epiphany may strike?!).

Read This: Not sure where to start? Look no further than these 11 apps to download for a creative weekend at your fingertips.

It’s time to expand your inner circle with a new crew of creative types and collaborators (AKA start recruiting now). Avoid the comparison game at all costs — just because someone’s ahead of the game doesn’t necessarily mean you’re behind. At the risk of sounding cliché, you’re *right* where you’re supposed to be, Sag! Don’t ever forget this.

Read This: Creativity is contagious, y’all! Check out these five things we learned from Brené Brown about the courage to be creative at Re:Make 2016.

With a go-get-’em ‘tude, you’ll feel inspired to accomplish ALL the things this week. Resist the urge to bite off more than you can chew — your personal sanity will take a hit. A competitive streak may or may not create for an awkward boardroom as you rub some of your co-workers the wrong way. It’s one thing to foster a little friendly competition, it’s downright rude to snub those who’ve supported you since day one. Tread carefully, Cap.

Read This: Put an end to the drama once and for all with these five tips for dealing with your frenemy like a boss. (Photo via Getty)

Have passport, will fulfill your travel bucket list once and for all. After weeks of walking on eggshells (no thanks to retrograde), your adventurous spirit has finally returned. It’s ‘bout time! Whether for business or pleasure, now’s the time to book that one-way ticket to Europe or pay a visit to your BFF studying abroad.

Read This: Channel your inner globetrotter with these 14 fall getaway essentials according to Julia Engel of Gal Meets Glam. So chic!

Do you really know your squad as well as you think? Be forewarned: Your outgoing spirit and ability to trust could get you into major hot water this week. A so-called “friend” who you thought had good intentions could really end up being the villain. Until you’re able to pick out your true friends from your frenemies, it would be best to keep your secrets under wraps.

Read This: Can’t we all just be friends?! Here’s how to deal when you’re SUPER mad at your roommate. A “State of the Roomies” meeting is definitely in order. (Photo via Getty)

It’s time to take the leap and make things officially official, Aries! Be it dotting your i’s and crossing your t’s on a contract or saying “I do” to a certain proposal, commitment is in the air. Not sure you’re ready to take the plunge? Don’t you dare make any rash decisions that could bring you turmoil down the road. An engagement to your best friend shouldn’t be taken lightly — this isn’t an episode of the Bachelor with roses up for grabs.

Read This: Avoid the inevitable with these 10 clever answers for “so when are you two getting married?” You’re so welcome. (Photo via Getty)

With apples to be picked and trips to the pumpkin patch to be made, this is not the time to be a couch potato. (The Netflix binge-watching sesh can wait!) Go ahead and declare October to be your personal wellness month. Between educating yourself about the clean eating movement and making an effort to get out more (a nature hike! morning yoga!), there’s nothing stopping you from being a self-proclaimed fit girl.

Read This: Get up and movin’ with these seven yoga poses to undo the damage of sitting at a desk all day. (Photo via Getty)

No more flying under the radar for this lady boss who’s got lofty goals and stylish plans. Start pitching your ideas to the higher-ups and laying the foundation for your personal business now rather than later. There’s no reason why you can’t come out on top! An Instababe-approved #OOTD may or may not be in order as you show everyone who’s boss.

Read This: Cue the girl power: We’ve got five tips Tyra Banks taught us for ruling the world at Re:Make 2016. You’re going to want bookmark these for later.

Brace yourself for an emotional rollercoaster that could result in major DRAMA before the end of the workweek. Going beyond a little “he said, she said” disagreement, you may find yourself stuck in the middle of a three-way tryst. Be the mediator by owning up to any mistakes and avoiding judgement until the facts present themselves. Whatever you do — don’t sweep your problems under the rug.

Read This: Say buh-bye to the drama with this easy trick that will strengthen all of your relationships. (Photo via Getty)

Go ahead and update your Tinder bio to read, “single and ready to mingle.” Your shy tendencies take a backseat all this week as your bubbly personality comes out to play. Between group outings and one-on-one dates, you’ll have no trouble staying a busy bee. Because sharing is caring, it won’t be long before you’re playing matchmaker for a few single AF friends.

Read This: No more swiping left for you! Word on the street is that this dating app wants to get you into a serious relationship. (Photo via Getty)

The temptation to splurge on a new pair of embroidered ankle booties or a certain waxed field jacket you’ve been eyeing will be all too real this week. Resist — you must resist, Virgo! Start a Pinterest board of lust-worthy items to save up for or try shopping your roomie’s closet for a few new gems. (Ask first, of course, but borrow away!)

Read This: It’s time to take control of your finances with these five bad money habits and how to break them. (Photo via Getty)

Don’t forget to follow us on Pinterest for more daily inspiration, and check out your full AstroStyle horoscope!