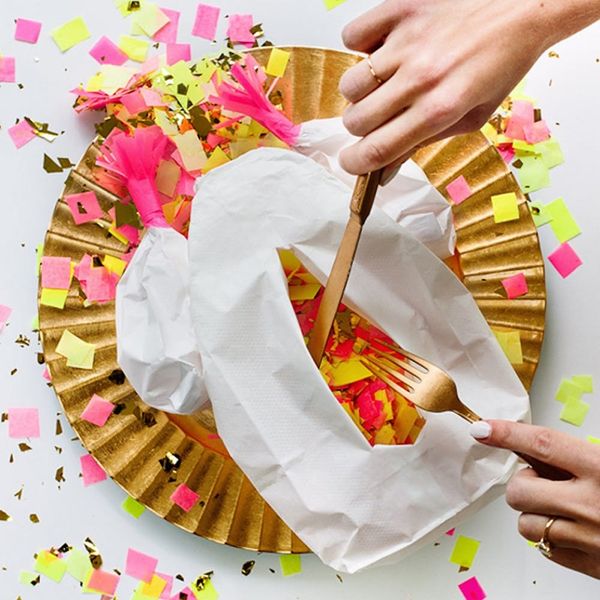 Doesn’t matter if you’re cooking your first turkey ever or you’re an old pro, Thanksgiving dinner takes a long time to put together, and sometimes you’ve gotta get creative when it comes to entertaining those hungry tummies. What better way to hang out with your loved ones than with a few fun Thanksgiving-themed games? Keep kids of all ages — and their grown ups! — out of the kitchen with these 16 super simple DIY games that you can complete in no time.

1. DIY Thanksgiving Balloons: Keep the whole family entertained coming up with silly Thanksgiving-themed puns to write on these colorful balloons. Then let the kiddos help put together those hilarious turkey leg balloons. By the time they’re done, dinner will be ready AND the table will be decorated. (via Studio DIY)

2. DIY Confetti Stuffed Turkey: Psh, why mess around with all that messy turkey stuffing when you can stuff with confetti instead. This would be the best centerpiece for the kid’s table, but don’t be surprised if the adults want one too. Let the family help make these confetti-filled tissue paper drumsticks and let the confetti fly. (via Studio DIY)

3. DIY Turkey Bowling: Okay, this might be the cutest use for butternut squash, ever. Print off these adorable turkey faces, attach to 10 butternut squashes with double-sided tape and let the good times roll. (via The Dating Divas)

4. DIY Pumpkin Twister: Rev up your printer and start rolling out these pumpkins. Or, if you’re feeling extra artsy, let the kids help you paint pumpkins on a large white sheet for an XL version of the classic Twister game. Everyone from preschoolers to grown ups will def want to take a spin… or 10. (via Pint-Sized Treasures)

5. DIY Pumpkin Chuckin’ Game: Save little fingers and toes with these soft and cushy toilet paper pumpkins. They’re a breeze to make, but are practically guaranteed to get plenty of playtime no matter what age group you’re entertaining at your Thanksgiving dinner. (via B-Inspired Mama)

6. DIY Pumpkin Minute to Win It Games: Doesn’t matter whether you’re playing against a room of kids or beating your BFFs at Friendsgiving — these minute to win it games are sure to be a hit. This tutorial features eight games, including a pumpkin ring toss, candy corn stick-up and pumpkin seed pick up. (via The Dating Divas)

7. DIY Pumpkin Toss Game: Even if your to-do list is totally out of control, you can whip this game together in just a few minutes for about $5. Grab some cardboard and a tub of orange paint, then cut out some cheery pumpkin faces. Collect bean bags from your summer corn hole game or just pick up a bag of plastic balls at the dollar store. (via Lolly Jane)

8. DIY Thanksgiving Pictionary: Keep everyone entertained with this quick and easy DIY game. Put a festive spin on the classic game of Pictionary with themed topics. Keep them all stored in a painted Mason jar turkey with Popsicle stick “feathers.” (via Somewhat Simple)

9. DIY Stuff the Turkey Game: Get the kids out from under your feet while you’re stuffing the real thing with this super easy paper bag turkey. Wad up scrap pieces of paper for the balls and let them have at it. Make it harder for the big kids by putting the “turkey” in hard-to-reach places or awarding different point systems. (via Kid Friendly Things to Do)

10. DIY Printable Thanksgiving Game: Use up all that leftover Halloween candy with this fun game. It’s easy to learn and is a great way to entertain little ones if it’s too cold to play outside. (via My Sister’s Suitcase)

11. DIY Pumpkin Tic Tac Toe: Tape a grid on the table using washi tape and use mini pumpkins as the game pieces. It’s the *perf* Thanksgiving game, since it takes zero time to clean up when it’s finally time to serve dinner. (via It’s Overflowing)

12. DIY Thanksgiving Bingo: Bingo is one of those great games that everyone will want to play, especially when there’s candy on the board. This tutorial has everything you need, including printable boards and playing cards. (via Crazy Little Projects)

13. DIY Roll a Turkey Game: This is a super quick game that’s ideal for big groups of kids, and all you need is a printer and a die. Simply match the number that you roll with the number on the game board to build your own cute turkey. (via Inspiration Made Simple)

14. DIY Thanksgiving Placemat Printables: Obviously, these placemats aren’t just for the kids. Print out a few of these illustrated placemats to color while you’re sipping cider and waiting for the turkey to get out of the oven. (via Lindsey Crafter)

15. Thanksgiving Photo Booth: After you’ve feasted on turkey (and before you’ve loosened your belt), re-energize the fam with a good ol’ Turkey Day photo booth. Hang a few strands of tassels, grab some props and get that camera timer ready to go. (via Brit + Co)

16. DIY Pumpkin Pie Flavored Turkey Donuts: Technically this isn’t a game, but putting together these adorable mini turkey donuts is pretty dang entertaining. The kids will get a good chuckle out of making the mini drumsticks, and you know you can’t go wrong with donuts. (via Aww, Sam)

What’s your favorite game to play on Thanksgiving? Make sure you’re following us on Pinterest for even more Thanksgiving decor ideas!

From Your Site Articles
Related Articles Around the Web
Kate Thorn
Kate Thorn is an illustrator, foodie, photographer, and blogger at Create & Kate. She loves creating art, traveling, and all things chocolate. A native to the Great Northwest, she is currently living in London and pretending to be a mature grad student.
DIY
Celebrity News
DIY Entertaining Games Halloween Kids Party
More From Celebrity News