Seeing Nearly Double: These Are the Rarest Kind of Twins 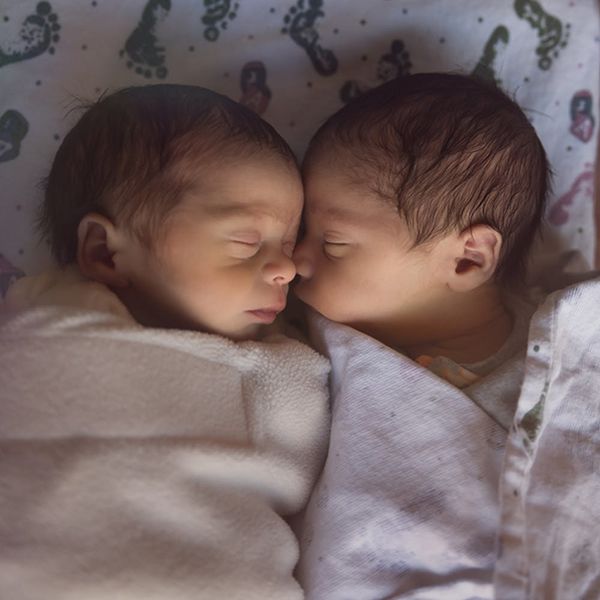 Even if you’ve never met an identical twin (or two) you’re probably familiar with famous ‘90s superstars Sister Sister’s Tia and Tamera Mowry, or The Parent Trap’s Hallie and Annie Parker (played by Lindsay Lohan and Lindsay Lohan). While the number of twins has been increasing in the last three decades, it’s still rare: Approximately 3.3 percent of babies born today is a twin (either identical or fraternal), compared to two percent in 1980, and identical twins are less common than fraternal twins. However, doctors in Australia have just published a report in The New England Journal of Medicine confirming that they’ve been monitoring a set of the rarest kind of twin — the second set of semi-identical twins ever recorded. Here’s how this happens, and what it can mean.

What is a semi-identical twin?

If you cast your mind back to high school biology class, you might remember that fraternal (dizygotic) twins occur when two separate eggs are fertilized by two separate sperm. (“Di” means “two” and a zygote is a fertilized egg, hence this term identifies twins who grew from two separately fertilized eggs.) These twins get 50 percent of their DNA from the person who produced the egg, and 50 percent from the person who provided the sperm. Identical twins (monozygotic) occur when one egg is fertilized by one sperm and then splits and develops into two separate embryos. These twins share 100 percent of their DNA. Semi-identical twinning, on the other hand, is believed to occur when a “single egg is fertilized by two different sperm and the resulting embryo splits,” explains Daniel Kort, MD, Associate Medical Director and Practice Director of Neway Fertility in New York.

The set of twins involved in the current study are only the second on record to have survived to birth — and the first to be identified during a routine pregnancy scan. At six weeks, doctors noticed signs that their mother was expecting identical twins; but at the 14-week scan, they realized that the twins were different sexes, meaning that they couldn’t be genetically identical. Now aged four, the twins live in Brisbane, Australia, but their identities haven’t been revealed. Since they developed from the same egg, they share 100 percent of their mother’s DNA, and further tests found that they share 78 percent of their father’s, according to doctors monitoring them. The first set of semi-identical twins ever identified, who were born in the US in 2007, shared 50 percent of their father’s DNA. The term “semi,” which means half, isn’t quite accurate: The medical term coined by the doctors who wrote the latest report is “sesquizygotic” twins, since “sesqui” means one and a half.

Why are semi-identical twins so rare?

It’s actually not unusual for an egg to be fertilized by two sperm and then split into separate embryos, Dr. Kort explains. “The fertilization of one egg by two sperm, known as polyspermy, is a well-described phenomenon,” he says. “However, in the overwhelming majority of cases, the resulting embryo does not develop and does not become a pregnancy. What makes this case so remarkable is the fact that following polyspermy, the embryo divided into two embryos (twins) capable of implanting and developing into a pregnancy.”

One of the reasons that semi-identical twins don’t normally survive is because they have three sets of chromosomes, a condition called triploidy that usually leads to miscarriage or birth defects that are incompatible with life. In this case, one of the twins has gonadal dysgenesis, a condition in which external sex organs don’t fully develop. “A polyspermic embryo, by definition, is highly abnormal,” Dr. Kort confirms. “Such an embryo has significant genetic instability and is prone to multiple genetic mutations, such as seen in gonadal dysgenesis. Gonadal dysgenesis can manifest in a variety of clinical presentations, typically including [biological] sexual ambiguity and sterility.” The same twin also suffered a blood clot at birth, which led doctors to amputate one arm. Otherwise, the twins are developing without issue.

In case you were wondering, the chances of there being some identical or fraternal twins out there who are actually semi-identical are unlikely. “While this is possible, such an occurrence is highly unusual,” Dr. Kort reassures us. “Furthermore, with the increase in popularity of genetic testing, it is likely that more of such cases would be reported.” Wherever these twins are now, we wish them all the best.

RELATED: This Company Is Working to Make IVF and Egg-Freezing Standard Employee Benefits

Natasha Lavender
Natasha Lavender is a Londoner living in Chicago, and is fluent in British and American. She writes about pop culture, health, lifestyle, feminism, fashion, and interviews with interesting people, and has previously worked for Good Housekeeping magazine, Buzzfeed, and Hello Giggles. She loves podcasts, running, reading, dogs and cats equally, and peanut butter anything.
Baby
Pregnancy
Baby Healthy Living Pregnancy Science
More From Pregnancy