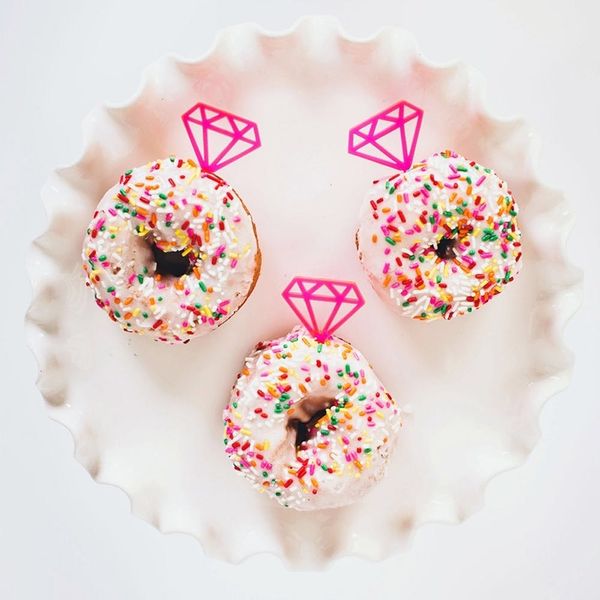 Wait. Wasn’t it just National Donut Day over the summer? It sure was! But November 5 is National Doughnut Day, plus donuts definitely deserve to be celebrated twice. Whether you’re a traditionalist who prefers her donuts in the mornings, a wild child who eats them before bed or a mid-day snack kind of girl who pairs them with your afternoon coffee, we’ve got something for everyone. These might just inspire you to host a donut party — but don’t forget our invite!

2. Apple Watch Band ($70): Even your technology wants to get in on the action! Something tells us you’ll be sporting the quirky band more than twice a year.

3. Bacon Nation Cookbook ($15): Bacon and donuts are a win-win. Get some yummy ideas for how to take your bacon and donut combo out of the box with this rad cookbook.

4. Peach Bellini Mix ($8): If you’re celebrating National Donut Day over the weekend with a donut-filled brunch, be sure to bring along this peach bellini mix. Just add champagne and you’re ready to rock.

5. Donut Bracelet ($16): A whimsical play on charm bracelets, this beaut’ is equally stellar as a standout on its own or as an addition to a stack of wrist jewelry.

6. I Attend Brunch Every Sunday Sweatshirt ($38): Donuts mean breakfast, and what breakfast really means is brunch. Advertise your love for the universal Sunday morning activity by wearing this cozy sweatshirt during the week. You might end up with a few new friends joining your brunch crew.

7. Donut iPhone Case ($40): Show off your love for donuts on National Donut day and all the other days. This beautifully illustrated donut iPhone case will keep your phone looking fly and protect it too — it was drop-tested with 24 consecutive drops!

8. Smiley Face Donut Tee ($24): This tee is screen printed by hand, cast on American Apparel duds and available in white and gray too. The awesomeness of this shirt will probably have your friends asking to “borrow” it.

9. Donut Stand ($22): National Donut Day is definitely an occasion that calls for a donut pedestal. Technically it’s a cupcake stand, but it’s pretty much perfect for a stack of donuts too.

10. Hand Made Baking Book ($30): Does the awesomeness of Donut Day have you in a new-found baking tizzy? Channel your creative juices into yummy new recipes with this baking book. You won’t regret it, and the people in your life will love you even more for all the extra goodies you’re about to be sharing!

11. Grumpy Donut Cards ($20): We donut want to share either. This set of five tongue-in-cheek greeting cards are blank on the inside, so you can spin the grumpy sentiments however you like.

12. Party Planning Class and Kit ($59): If you wanna host a Donut Day breakfast party, let us show you the light of easy and flawless hosting with our party-planning tips and strategies.

13. Donut Ornaments ($20): It’s Christmas in November with this set of four donut ornaments. They look great hanging off a jewelry tree or a doorknob, or dangling from the ceiling from some shiny gold ribbon.

14. Paper Tableware Set ($49): The colors of this tableware set add a bit of subtle glam, but won’t steal the show away from the pretty donuts you serve on top of them. This set includes eight of everything you need to throw a spectacular donut feast.

15. Party Invitation Stamp Kit ($14): If you’re gonna have a donut party, you’ll need some invites. Thanks to this stamp set, sending out the invites is a delight.

Which one of these bad boys will be by your side on the best day ever, aka Donut Day? Let us know in the comments!

Cinnamon Janzer
Cinnamon hails from the prairie lands of North Dakota, has been told that she thinks too much, and loves using oxford commas. She's a writer and editor whose work has been featured in FastCo.Exist, GOOD.is, and more. Cinnamon currently lives in Nicaragua with her dog, Gus.
Brit + Co Shop
Food
Brit + Co Shop
The Conversation