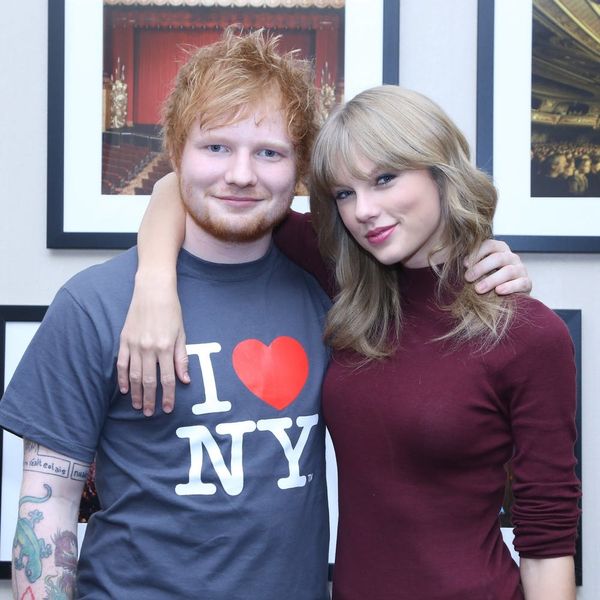 From the moment Taylor Swift’s “Reputation” dropped, fans have been trying to decode the lyrics to figure out who or what each song is about. Some listeners apparently thought her BFF Ed Sheeran might be the object-of-affection featured in the super-sexy track “Dress,” and he just responded to the buzz in a new interview.

The lyrics, which include the lines “There is an indentation in the shape of you / Made your mark on me, a golden tattoo,” led some people to believe that Swift was referencing Sheeran’s hit “Shape of You.” And that’s not all! Fans also saw a possible connection to Sheeran in the chorus: “I don’t want you like a best friend / Only bought this dress so you could take it off.”

Now Sheeran himself has weighed in on the seemingly suggestive and sultry situation.

“I don’t think it is [about me],” he said during a recent Instagram livestream with AugustMan magazine. “I think if you read into it, it’s not.” And he had evidence to back up his denial: “She mentions someone with a buzzcut haircut — I’ve never had a buzzcut haircut.”

Indeed, “Dress” specifically mentions when the star first set eyes on the person she’s singing about: “Flashback to when you met me / Your buzzcut and my hair bleached.” As Sheeran pointed out, he has never had a buzzcut. But we happen to know someone else in the “…Ready for It?” singer’s life who did have a buzzcut around the time they met: Swift’s current boyfriend Joe Alwyn.

At the 2016 Met Gala (yes, the very same one where she was seen dancing with Tom Hiddleston), the actor was seen sporting a super-short ‘do and Swift was slaying bleached hair. This seems to suggest that the tune (which is so sexy, her parents reportedly had to leave the room during a listening party!) is about him.

So while some fans may always ship a Swift + Sheeran love connection, it looks like we’ll just have to continue to appreciate their sweet friendship.

Do you ship Taylor Swift and Ed Sheeran as a couple or do you love them as friends? Let us know @BritandCo!