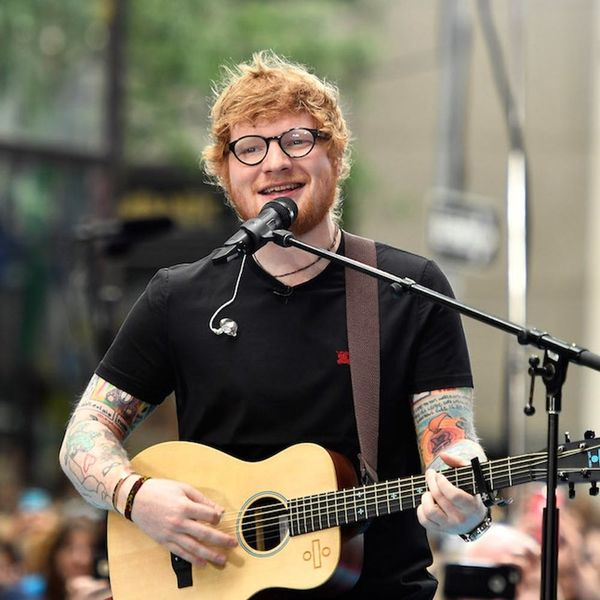 Ed Sheeran’s a Lannister and Jade Roper is pretty in pink in this morning’s top news stories. Check out those and more below in the Monday Morning Buzz!

1. Game of Thrones finally returned with its season seven premiere, and along with (SPOILER ALERT AHEAD!) Maisie Williams getting revenge as Arya Stark, the show featured a surprise cameo from Ed Sheeran. Though it was revealed back in the spring that Sheeran, at the request of mega-fan Williams, would appear on the show in the new season, no other details were known, and when he showed up halfway through the ep singing Lannister folk songs, people could. Not. Even. Some viewers complained that his appearance took them out of the fantasy of the show, but others seemed to be very into Sheeran’s appearance.

Congrats to this beautiful Chica. You're going to be the most amazing momma!! @jadelizroper 💐👶🏼

2.Jade Roper’s beautiful baby shower celebrated girls who just wanna have fun.Bachelor in Paradise stars Jade Roper and Tanner Tolbert announced back in May that they were expecting a baby girl, and this weekend, Roper had the prettiest pink baby shower in anticipation. People detailed the day, which took place at the Garland in Hollywood and featured a brunch, a custom “poptail” (Champagne with a popsicle) bar, and decor including cable-knit poufs and red velvet chairs. But the real star of the show (besides Roper, of course!) was the pink cotton candy and floral photo background that read “Girls just wanna have fun.” Dreamy and adorable! (h/t People)

Walk away from gossip and verbal defamation. Speak only the good you know of other people and encourage others to do the same. pic.twitter.com/XDFuPUkTfS

3. Aaron Carter speaks out after his DUI arrest. On Saturday, Carter was arrested on suspicion of driving under the influence as well as possession of marijuana. After being released on bail on Sunday, he tweeted a statement addressing the incident. In the note, Carter claimed that a new tire on his car malfunctioned, and said that he has a medical marijuana license and that he was targeted due to his celebrity. Carter also went on to address his older brother Nick Carter’s public comment on the matter, saying, “If my own blood truly cared about my well-being, why wouldn’t he call me directly and have a conversation instead of making this about him through a very public forum? That’s not cool at all to use me for his PR and kick me while I am down.” Nick had previously tweeted his support to his brother, telling his younger brother that he would be there to help him should he choose to ask for it. Aaron continued to tweet to his fans, telling them not to be bullied into silence or made a victim. (h/t E!)

4. Celebrities are celebrating the life and work of legendary horror movie director George Romero after his death. Romero fought a brief battle with lung cancer and died on Sunday at age 77, according to the New York Times. Romero’s cult film Night of the Living Dead changed the game for horror movies, and specifically the zombie genre, and those in Hollywood who were influenced by the director are paying their respects on Twitter. “Romero started it,” Get Out director Jordan Peele tweeted, while Moonlight director Barry Jenkins also praised Romero, not just for his invention of the genre, but for inventing “yelling at the TV.” Stephen King honored his friend with a simple, “There will never be another like you.” RIP, George. (h/t NYT; photo via Ethan Miller/Getty)

I can't believe that today marks 12 years together with you @catelynnmtv, babe you literally are the greatest gift this life has given me! We were only kids when we fell in love, but we were kids who knew what we wanted out of life & who we wanted to get it with. Not a lot of people get that opportunity or blessing at such a young age. Even though we were so young, I wish I could go back as far as I could just to love you longer! I am just so happy & honored to be your husband. I love you SO much! #HappyAnniversary #12YearsStrong #SoulMates #MiddleSchoolSweetheart

5. Teen Mom‘s Catelynn Lowell and Tyler Baltierra celebrated their 12th anniversary with a perfectly sweet post. Lowell and Baltierra have truly gone the distance, starting out as middle-school sweethearts, going through teen pregnancy and adoption, and then marrying and having another child. Now, the pair are celebrating their 12th anniversary, and Baltierra posted an Instagram that is so fitting of their sweet bond. “I can’t believe that today marks 12 years together with you,” he captioned a picture of them as kids alongside a current pic. “Babe you literally are the greatest gift this live has given me! We were only kids when we fell in love, but we were kids who knew what we wanted out of life and who we wanted to get it with. Not a lot of people get that opportunity or blessing at such a young age. Even though we were so young, I wish I could go back as far as I could just to love you longer! I am just so happy and honored to be your husband. I love you SO much!” Um, ‘scuse me, just crying a bit. Too cute! (h/t E!)

6. Quote of the day: “I attribute my success to this: I never gave or took any excuse.” — Florence Nightingale has the perfect words for our #MondayMotivation.

What’s motivating you this week? Let us know @BritandCo!