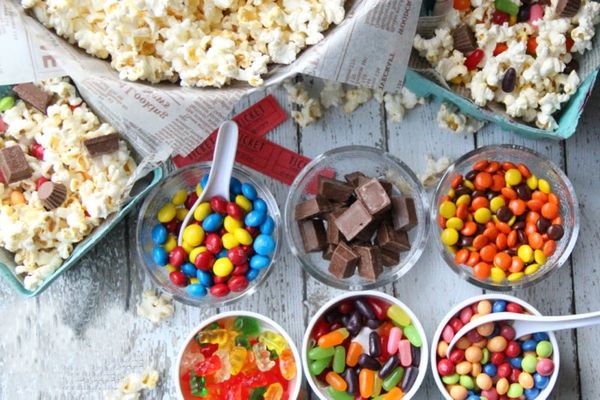 You’ve spent the past year binge-watching shows like Orange Is The New Black and catching up with Elaine, er, we mean Selina Meyer on Veep. You’ve cried for or cheered on the most gruesome deaths on TV with Game of Thrones and lost all faith in the political system watching House of Cards. Now it’s time to put those precious hours spent with a bag of popcorn, your couch and the remote to good use by throwing the most epic Emmys viewing party. With these decorations, recipes and drinks you and your friends will be cheering on and paying homage to the best TV has to offer.

1. Star Garlands: Your favorite stars will be running the red carpet Sunday, so hang a DIY garland in their honor. Cut stars from gold foil and glitter paper, then string them along the walls and ceiling for this star-studded event. (via Green Wedding Shoes)

2. Breaking Bad Cocktail: It’s the last time Breaking Bad will rake in the awards (but we have Better Call Saul to look forward to!). Cheer Jesse, Walt and the rest of the gang on with a sweet and tangy cocktail inspired by their infamously blue product. (via Wine Enthusiast)

3. Game of Thrones Wax Seal Coasters ($10): Keep water rings out of your kingdom with these GoT-inspired coasters. Have fun assigning them out to guests based on which family they’d be a part of.

4. Balloon Awards: Balloon decorations double as a party game with this fun idea: Use envelopes as balloon anchors. Each envelope features a different category, like “Best Shoes,” “Best Hair” or “Best Dressed.” As you watch the red carpet, have your guests cast their vote in each envelope, then announce the winners during commercial breaks. (via Studio DIY)

5. Downton Abbey Bordeaux Claret ($17): Admit it, you were finally convinced to watch Downton Abbey and spent an entire weekend soaked into the British soap drama. Show your love by pouring a glass of this show-inspired wine as they receive their awards.

6. Celebrity Straw Toppers: Here’s an easy DIY to amp up your straws and cupcakes: Print pictures of the hottest stars at the Emmys — from Emmy Rossum to Matthew McConaughey. Then thread them onto straws, or put them on toothpicks and use them as cupcake toppers. (via Cupcakes and Cashmere)

7. I’m the Next Supreme American Horror Story Mug ($15): This mug is only for the hostess. Claim your power Jessica Lane-style with a Coven-inspired mug.

8. House of Cards Ribs: Kevin Spacey going to town on a plate of Freddy’s ribs as Frank Underwood has become just as iconic as his eerie portrayal of the conniving senator. Serve up your own platter of ribs at your Emmys viewing party — we just hope none of your friends are as ruthless as the nominated man himself! (via Parade)

9. Top Hat Wall: The Emmy Awards are a night of glitz and glamour… and a few tuxedos and top hats. Your guests don’t have to dress for the night, but your walls can! Just hang party store top hats on the wall using temporary hooks. (via Kelly Golightly)

10. Orange Is The New Black Stickers ($2): Your favorite jailbirds have earned themselves a whopping 12 Emmy nominations this season. Give a well-deserved nod to your favorite criminal gals by handing out these character stickers.

11. Emmy Award Bingo: While the awards are handed out, turn your night into a silly game with bingo printouts. Spots are given to who wins what (Matt McCfor Best Actor?) and expected behavior (how many times will someone cry when they get the statue?). Hand out a fun prize to the first one to fill in their board. (via Punch Bowl)

12. Candy and Popcorn: One thing’s for sure, with any award show, you’re in for a long night. So keep the energy up and your guests’ bellies full with a popcorn bar filled with candy mix-ins. (via Family Fresh Meals)

13. Mad Men Cocktail: Your favorite ad agency is sure to make an appearance on stage to accept an award or two. Your guests can drink along with them with this old-school cocktail that’s simple to make with just rye whiskey, sweet vermouth and bitters. (via Yum Sugar)

14. Boardwalk Empire “Party Like It’s 1923” T-Shirt ($25): There’s nothing prohibition-era about your Emmys party, but you can still show your love for Steve Buscemi and the rest of the Atlantic City crowd with this party-hard tee.

15. Game of Thrones Delicacies: Take a page out of the Game of Thrones cookbook, A Feast of Ice and Fire ($20), and whip up a feast fit for all seven kingdoms, including Aria-inspired tarts (pictured) or sweet corn fritters. (via Radio Times)

16. Veep Cocktail: Selena Meyer may be the funniest vice prez we’ve ever had, and she’s also the inspiration behind this Crown Jewel cocktail. It’s made with vodka, elderflower and ginger liquor. (via People Stylewatch)

17. Modern Family Printables: The funniest family on television has provided us with multiple seasons worth of one liners. Always an Emmy favorite, you can expect them to win big time this year, too. Celebrate the Dunphys ‘and Pritchetts’ best lines ever by hanging these printables on your wall. (via Hostess With the Mostess)

18. Award Night Cookies: Nothing beats a late-night sweet. Serve these delicious sugar cookies, made to match the red carpet beauty and style. (via The Sweet Adventures of Sugarbelle)

19. Prime Thyme Cocktail: Honor the night that’s all about primetime TV with a cocktail by the same name, infused with the herby flavor of thyme. (via The Boys Club)

20. House of Cards Napkin Rings: Here’s a fun way to amp up your House of Cards fandom. Poke holes in a deck of cards so you can string a few around a napkin and silverware. Even Frank Underwood would be impressed! (via Oh My! Creative)

What shows are your rooting on while you watch this year’s Emmy Awards? Tell us below or on Twitter!

Allyson Dickman
Allyson is an editor in Washington, DC. A fan of all things food and travel she's always on the hunt for her next adventure, a good bite to eat and the next best thing to truffles. You can find pics of her delicious travels on Instagram at @allyren.
Party