This Couple Announced Their Pregnancy With a “Fresh Prince” Rap 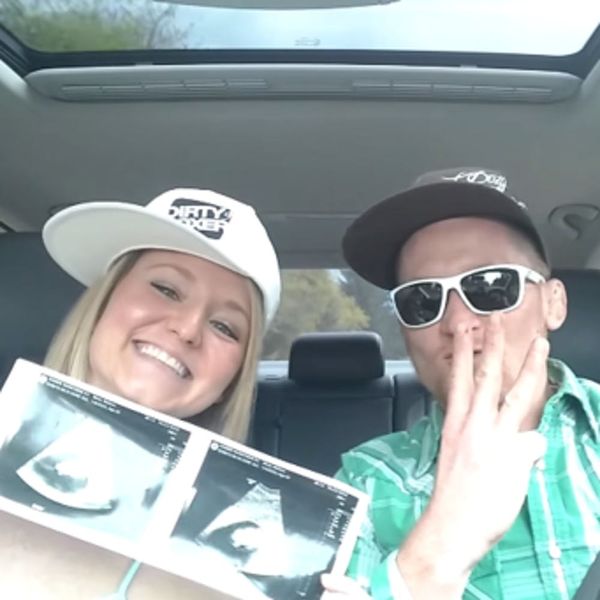 From the gal who surprised all her besties with the news she is pregnant mid-photo to the slew of celebrity baby announcements, folks get all kinds of creative when they’re making their exciting news public. We’ve seen a Wes Anderson-inspired pregnancy video and even a 9-month time lapse of the mom-to-be + her (new!) fam, and now the most recent announcement video to go viral is taking us straight back to those Will Smith-loving days of the ’90s.

Oregon-based parents-to-be Jesse and Melissa Meek decided to announce their pregnancy by rewriting those “Fresh Prince of Bel-Air” lyrics we all know by heart. While on the way to Melissa’s parents house for Easter, they taped a phone to the dashboard, popped on some stylin’ hats and did their best to make Will Smith proud.

The song starts out pretty much the same (“This is the story all about how their lives got flip-turned upside down”), but quickly gets transformed into a much different kind of story. Jesse recites the line, “Little did they know the time had began to start our own family and man it was fun/If anything we thought that it would take time/But in only two months we’re singing you this rhyme.” Mellisa finishes off the song strong by rapping, “I woke up in the morning about 7 or 8 and thought to myself, “Oh man, I’m late!”/ Looked at the test stick it was finally there/A little plus sign – we’re now three, not a pair.”

This nostalgic announcement actually wasn’t the first time they documented the exciting stages in their first pregnancy. When Melissa broke the news to Jesse and then her parents, she also recorded those reactions. Naturally, everyone was elated, but their pup seemed to be the most excited of them all.

With two great videos already under their belts, you can bet we’ll likely be seeing more from this couple. They told Oregon Live that when they find out the baby’s gender next month there might even be a sequel. Carlton, you up for a spot as a guest star?

What’s the most creative pregnancy announcement you’ve seen lately? Share a link with us in the comments below.

Cortney Clift
Cortney is the senior writer and special projects editor at Brit + Co. She typically covers topics related to women's issues, politics, and lifestyle. When she's not buried behind her computer you'll find her exploring New York City or planning her next big adventure.
Pregnancy
Pregnancy
Pregnancy YouTube
More From Pregnancy