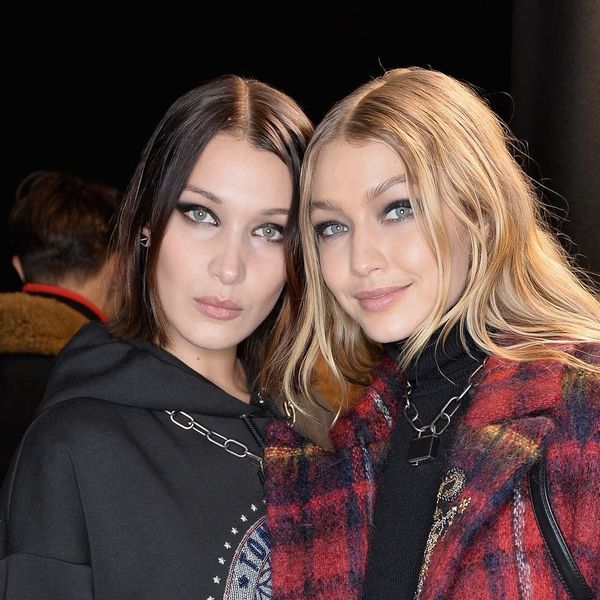 As two of the most famous supermodels on the planet, Gigi and Bella Hadid cause a splash wherever they go. When they combine their star power, however, whether it’s to walk the runway for the likes of Victoria’s Secret and Anna Sui or for ad campaigns (you might have caught their stunning Balmain spot), it’s pure magic. Their latest joint venture, however, is taking things next level with the sisters veering into what just may be their raciest territory yet with a *very* cheeky photo spread for British Vogue.

As the fashion industry's most in-demand sisters, we're more familiar seeing @gigihadid and @bellahadid apart than together. However, the sisters unite for the March 2018 issue of #NewVogue, on newsstands February 2. Photographed by #StevenMeisel, styled by #JoeMcKenna

22-year-old Gigi and 21-year-old Bella stripped down to their birthday suits for legendary photographer Steven Meisel to accompany their interview for the mag, which sees them speaking to their tight-knit bond. “She’s one of the only people I’ll get aggressive for,” Gigi revealed. “She makes me so proud. I would do anything for her.”

Very honored to be your March cover girl @britishvogue @edward_enninful with my sissy @bellahadid on a second cover, both by our beloved - the one&only #StevenMeisel !! 💛⚡️✨ thank you thank you thank you xxxxxxxx (on stands Friday, February 2nd!) #NewVogue

Both Gigi and Bella also shared their covers to their respective Instagram pages, with the elder Hadid sis captioning hers, “Very honored to be your March cover girl @britishvogue@edward_enninful with my sissy @bellahadid on a second cover, both by our beloved – the one&only #StevenMeisel!! 💛⚡️✨ Thank you thank you thank you xxxxxxxx.”

My @BritishVogue cover! 🌟🌟🌟All my love to you sweet, sweet @edward_enninful and all at @britishvogue for having my beautiful sissy @gigihadid and I share the March cover showing how similar we really are 👯‍♂️😝🦋Shot by our beloved and adored #SteveMeisel wearing @versace_official Thank you @patmcgrathreal @guidopalau for your unwavering attention on set and #JoeMckenna for always perfecting the look. ❤️Thank you xx (Out on stands Feb 2nd!)

Bella had an equally excited reaction to her cover, writing, “My @BritishVogue cover! 🌟🌟🌟 All my love to you sweet, sweet @edward_enninful and all at @britishvoguefor having my beautiful sissy @gigihadidand I share the March cover showing how similar we really are 👯‍♂️😝🦋 .”

Grab the issue when it hits stands February 2.

What do you think of Bella and Gigi’s jaw-dropping new photos? Let us know @BritandCo.

Arielle Tschinkel
Arielle Tschinkel is a pop culture junkie who went to NYU because the Olsen twins went to NYU (really). She is a freelance writer whose work has also been featured on HelloGiggles, Refinery29, SheKnows, Bustle, Hollywood.com, and many others; and she's living her dream one Britney Spears GIF at a time. Follow her on Twitter @mrstschinkel or visit her website at arielletschinkel.com.
Family
Style News
Family Style
More From Style News