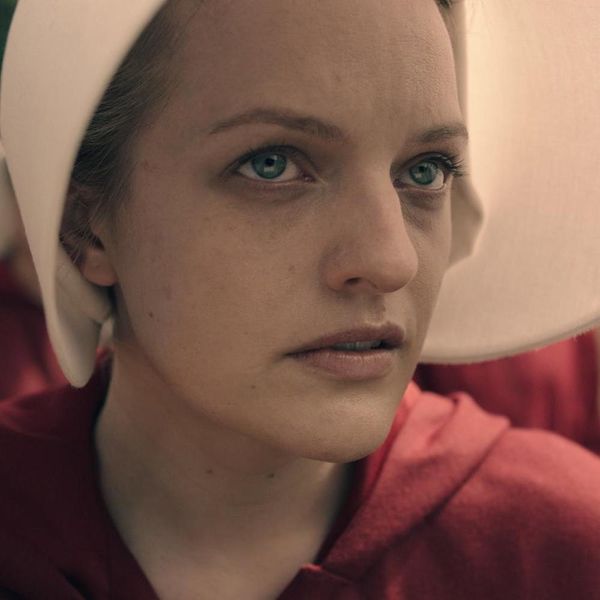 People are flocking to watch Hulu’s The Handmaid’s Tale, a chillingly rendered tale of a dystopian future adapted from Canadian author Margaret Atwood’s book. A lot of plot — though the novel was published in 1985 — runs eerily parallel to current events. And aside from shaping up to be a hit series, the show is also inspiring fashion as well.

“Given our wings, our blinkers, it’s hard to look up, hard to get the full view, of the sky, of anything. But we can do it, a little at a time, a quick move of the head, up and down, to the side and back. We have learned to see the world in gasps.”- Offred 📷@reedmorano #costumefitting #HandmaidsTale –EM @elisabethmossofficial

“The way that people are dressed in the story indicates who they are and what their purpose is. We explore similar themes in our collections by examining the way people are expected to dress.” The Handmaid’s Tale’s costume designer Anne Crabtree used color in a big way throughout the show. “There’s a real psychological approach to color in terms of where the colors lie,” Crabtree told Vanity Fair. “There’s less and less power as you go down the color spectrum, except with the color red… That is by design from the book.”

Excited to announce we are working on a capsule collection for Hulu's new show, The Handmaid's Tale #maidez

New York-based label Vaquera is collaborating with Hulu on a collection revolving around the series, including the uniform worn by the Handmaids: a long red cape and a white bonnet. “Hulu approached us to work on this project because we discuss similar themes with our own work. The novel has been an inspiration since the beginning of Vaquera because [of] its use of visual language to discuss poignant social issues. We are excited to work on something so groundbreaking and timely,” the brand said.

Vaquera also decided to capitalize on the color with a number of red looks in the collaboration. The four-person design collective shared a sneak peek on Instagram, writing “excited to announce we are working on a capsule collection for Hulu’s new show, The Handmaid’s Tale.” The collection also includes a red sweatshirt with “Don’t Let the Bastards Grind You Down” written in French.

The show’s star Elisabeth Moss posed behind the phrase written on the bathroom mirror at the LA premiere. She wrote in the caption: “Found my favorite phrase at our LA premiere. Don’t let the bastards grind you down… First 3 eps now streaming on @hulu. #HandmaidsTale #huluandpanic.”

The collection will be revealed in full in June during a performance piece.

What do you think of the collection so far? Have you started watching The Handmaid’s Tale yet? We want to know over @BritandCo.