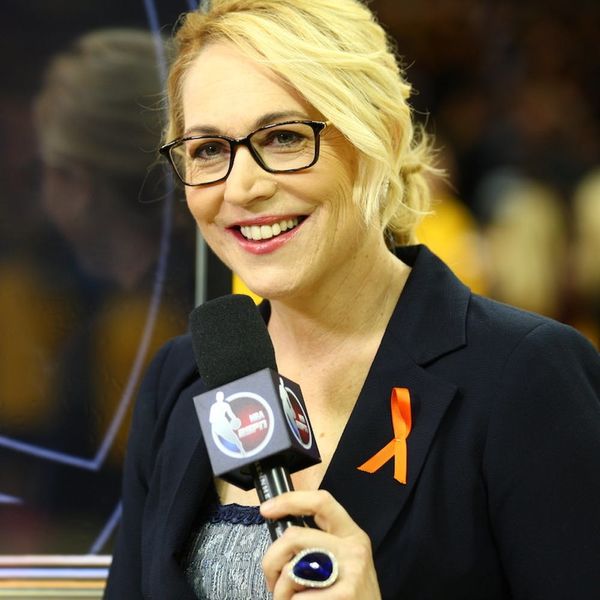 You don’t have to watch a lot of basketball to know who Doris Burke is. There’s a chance you remember when, in fall 2016, rapper Drake made a very public (and reciprocated) admission of admiration for the longtime NBA broadcaster. But there’s an even better chance still that her ESPN presence since the early ’90s has found a way into your home on more than one occasion. In late September, the sports network promoted Burke from NBA sideline reporter, making her the first woman to become a full-time, national, game analyst. It was a watershed moment in an already momentous career.

Burke’s hard-earned milestone will go a long way to help break down barriers for other women looking to get into sports announcing, but Burke admits that, if she thinks too much about the significance of it all, she gets nervous.

“If I stepped onto the air thinking, ‘Oh gosh, you’re the first to do this, or right now, you’re the only one doing this,’ that would terrify me,” she says over the phone from her home in Rhode Island. “I try to compartmentalize things. I will tell you, still, 20-plus years into this profession, I’m nervous before every broadcast.”

It’s a philosophy that has guided the 51-year-old mother of two through her entire career: Put your head down and do the work. Recently, just as Burke returned home from a red-eye flight from a game in LA, we had the chance to speak about her career, the future being female, and, of course, the game she loves so much.

B+C: This might not be an entirely new job to you in practice, but do you feel the symbolic shift at all?

DB: It definitely feels different from a number of perspectives. First, typically at this time of year, I’d not only be trying to keep up with the 30 NBA teams and their story lines, but I’d be doing the same thing for men’s college basketball and women’s college basketball. So from a purely preparation standpoint, it’s drastically different.

The other part of it — one thing I’ve tried to do my entire career is just lock in on the assignments. Just put your head down, work as hard as you can, make each and every broadcast as good as you possibly can, bring the story to the fans. The larger context of things, I don’t think about. It would make me nervous, frankly. I just try to lock in on the assignment, prepare to the highest level possible, and let the chips fall where they may.

B+C: How does it feel that a lot of the conversation is focused on you being the first woman in this role?

DB: It feels nice to have other female journalists come up to me and say how excited they are for me, and for what it represents for them in the future. It also excites me for what might be on the horizon for women. We’re not there yet, but it’s our responsibility to keep pushing, working hard, and preparing to the highest level so that we’re ready to meet these opportunities.

B+C:Are you seeing positive changes happening on the ground?

DB: It gives me great hope to have [NBA commissioner] Adam Silver say a year ago that he hopes sooner rather than later that there will be a head coach that’s a woman in the NBA. It makes me smile that [San Antonio Spurs head coach] Greg Popovich let [assistant coach] Becky Hammon coach a pre-season game. Men like that are helping to push the process along. And frankly, that has to happen. Women can keep preparing, working incredibly hard, achieving success at the highest level, but, you know, there has got to be enlightenment across genders to change the equation.

“It excites me for what might be on the horizon for women.”

B+C: Do you feel that culture is at a tipping point in that way? I can’t help but think of all of the stories of sexual harassment coming out from Hollywood at the moment and feeling a shift.

DB: I feel for these women who have been put through these heinous experiences in their profession. Having heard some of the experiences of my predecessors in the field I’ve chosen, it hurts your heart that they had to endure these things. But the fact that they are intrepid enough of spirit, courageous enough, to say, “You know what? Enough”? Yes, that’s absolutely a tipping point. We are past the point at which we have to endure this to find success. No more.

The other thing I would tell you is that, in the last five years, I have sensed an incredible shift in the attitude toward my acceptance. And I don’t mean that from the players and coaches — they have always been my soft landing spot. Whether I was showing up at a shootaround, a practice, a film session with a team, the players and coaches have taken me in and embraced me. The exception to me came from the fans at large. Maybe viewers who are unaccustomed to hearing a woman in that position. And for me, whether it’s in an arena, the number of men who stop me to tell me they enjoy listening to me — I have no empirical data, but I can feel it.

B+C: What are you looking forward to this basketball season?

DB: Oh my gosh. First of all, I love basketball. But, I said this last year, if I wasn’t sitting courtside, I’d be on my couch watching the games. I’ve been doing this since I was a kid, consuming basketball in any way, shape, or form that I could. I’ve played since I was seven, I’ve coached or broadcast it my whole life.

I’m excited for whatever story lines develop over the season. [Milwaukee Bucks’] Giannis Antetokounmpo is inserting himself early into the MVP race; that’s an exciting conversation. Golden State hasn’t looked spectacular except in stretches through the first four or five games, so the fact that so many people have anointed them as champions already — there’s months and months and many games to play. Who knows. Look at what happened to Gordon Hayward. Seconds into his Celtics career, he suffered this absolutely horrific injury. No one ever knows what stories will develop, what intrigue will develop in the NBA. I can’t wait for all of it. Everything excites me.

Are you watching Doris Burke on ESPN this season? Let us know @BritandCo!