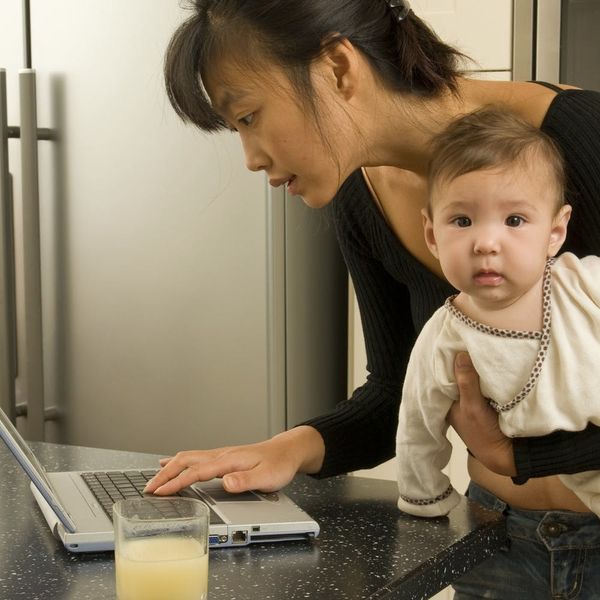 Some days I wake up uninspired. It’s a bummer, but it happens. Even after one, two or even three cups of coffee, my brain just doesn’t get into gear. This can be the worst, especially for those of us who provide food and fun to another human being — you know… being a mom. To kick start my brain and inject inspiration into my family’s day — flipping the switch from boring to brilliant — I enlisted the help of good ol’ Pinterest.

In an attempt to be “fair,” I asked my daughter to help in most of the food and activity decisions, since she’d be eating and doing all the things. I also wanted to be mindful of WHAT I was picking. While my heart was drawn to complicated projects and recipes that included long moments of marination (sorry Sauerbraten!) and crafts that would take days (I would like to do that embroidered French Dot Constellation Runner one of these days, but not today), instead, I used my head. I would only select Pinterest tasks that were easy(ish) to complete and stave off committing a Pinterest Fail. So how did my Pinterest day of parenting go?

Nutella + kid = “YES, mommy, we have to make that!” The Nutella Stuffed Pancakes by Recipe Tin Eats were a big, sweet, delicious win. You’re basically just putting down pancake batter, plopping a frozen disc of that chocolatey, nutty goodness down and then covering it in more batter. Initially, I thought that freezing the Nutella would take a long time, but the discs only need to be chilled for about 15 or 20 minutes. While my pancakes didn’t look nearly as gorgeous as Recipe Tin Eats’ (they’re the huge pancakes on the left), they were scrumptious. (via Recipe Tin Eats)

Let’s do something about that hair

I figured while I was poking around on Pinterest, I might as well give a new hairstyle a try. I have long sandy blonde hair that is usually thrown into a messy bun or gathered in a simple ponytail. To mix things up, I opted to try Kassinka’s Half-up Boho Braided Bun Hair Tutorial. I realized three things: I need a haircut, I need a color and — no matter how many times I tried her tutorial — I couldn’t make it look as good as Kassinka’s. (I now also have major hair envy!) (via Kassinka)

Time to get creative

While my daughter tried to pick out the MOST COMPLICATED PROJECTS EVER, I was able to talk her down to one that was way more practical to do on a moment’s notice. We opted for the Hand-Painted Mini Cactus Craft by Salt and Pepper Moms. It was a cinch. We just needed rocks, paint and little flowerpots. Thankfully, we had the latter two on hand. As for the rocks, we just took a stroll around our neighborhood and looked for stray rocks on the ground (making sure not to take any that were part of someone’s landscaping). Cute and easy, two of my personal favorite things. (via Salt and Pepper Moms)

You know what my kid loves? Those crazy and complicated character bento box lunches that incredible DIY parents create for their children. She’s spotted them on Pinterest before and has wondered why oh why I don’t make HER lunches that spectacular. Generally, in my home, time is of the essence when it comes to lunchtime. Assembly is either happening right before we rush out the door or when she is SO hungry that there just isn’t time for a complicated process. But this is Pinterest day, so I totally had to create some magic for lunchtime. Enter the Lunchbox Dad. While his Zootopia and BB-8 themed lunches are adorable, I don’t think I have the kind of skills to do those justice. Instead, I attempted the Star Wars Stormtrooper lunch, which did indeed prove I need to brush up on my knife skills. While my snap pea and cucumber TIE fighters came out fantastic, my tortilla Stormtrooper had a lot to be desired. I had to break it to my kid then and there: Mommy ain’t no lunch box artist. (via Lunchbox Dad)

Now for something practical

While pretty and fun, this Chore Chart also serves an important purpose of keeping track of my kid’s household tasks and responsibilities. The Crafty Chicks created an awesome solution using IKEA magnetic boards. Although a trip to the Swedish superstore wasn’t in the cards for the day, we still made it work. The Crafty Chicks provided a PDF of blank charts that you can customize. We printed one out on a heavy sheet of paper and stuck it on the fridge. For the markers, we upcycled an old magnet sheet, covered it in cute paper and then cut out little discs. Chore chart… done! (Now the hard part; making sure she follows it.) (via he Crafty Chicks)

Supper was a group decision, one in which my hubby joined in on. It was pretty rough getting us all to agree on one dish. While we were tempted by Taco Pop Tarts and a simple waffle-topped chicken pot pie, we finally declared that the Chicken Teriyaki Noodle Bowl recipe by Damn Delicious would totally hit the spot. And you know what? It TOTES did. It was easy, delicious and we agreed that this dish would join our regular rotation of weekday meals — even if we didn’t make enough sauce and we were out of sesame seeds (ours is on the right). (via Damn Delicious)

So, then what’s for dessert? I have to confess something. With all the new meal prep, and not one but two crafts, the idea of making a new dessert was daunting. At this point, I pretty much hit my saturation point of trying new things. Plus, there are SO many tempting cakes, cupcakes, custards, pies, cookies, donuts and hundreds of interpretations of s’mores that it was overwhelming. So you know what I did? Gave her a scoop of ice cream and called it a night.

It was a long day of trying new things. But I have to say; it was a fascinating exercise to force myself to experiment and to get out of the day-to-day rut that I didn’t even know I was in. How much did my family enjoy this experiment? So much that we’ve decided to do it at least once a month!

Sunny Chanel
Sunny Chanel is a freelance writer as well as the founder of the whimsical site Wonder and Company. When this proud San Franciscan isn't writing, working on her fixer-upper or doing crafts, she is playing dress up with daughter and planning her next trip to Disneyland.
Parenting