I Survived the Most Exhilarating Hike in the Caribbean 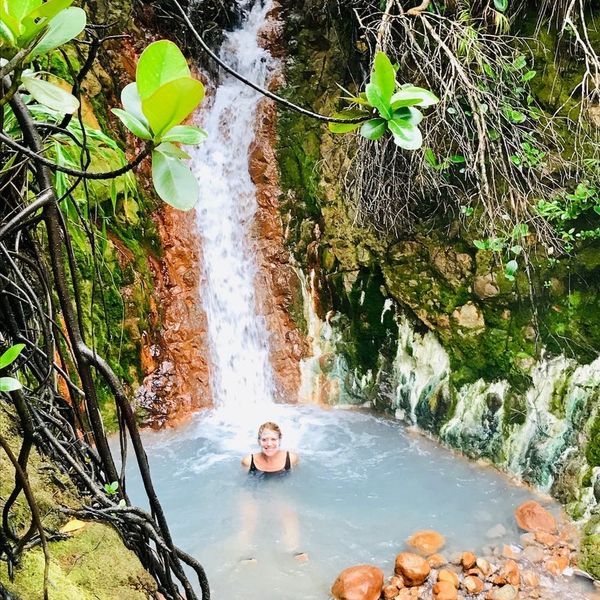 It was an early morning in late January, though the temperature didn’t feel like the Polar Vortex I was used to in New York City. I was in the island nation of Dominica and about to embark on one of the most challenging hikes in the Caribbean. Though the hike’s length was only 2.75 miles, it was known for being as difficult as it was exhilarating due to the terrain. But, in the words of Drake, it was worth it just for the #views alone.

Let me preface this story by explaining that I am not a hiker. I hike, but not religiously. A New Yorker, my morning routine usually includes mimosas, not meditation. Yet here I was, awake and in workout gear early in the morning, about to embark on an eight-hour hike. (They said it would be 4-6 hours, but I like to take breaks, and I challenge anyone to complete the circuit in less time.)

We were hiking to the Boiling Lake, which stretches out for eight miles in Morne Trois National Park, a UNESCO World Heritage Site. We were to encounter cloud forests, hot springs, and mini-geysers. Dominica’s Boiling Lake is the second- largest in the world after Frying Pan Lake in New Zealand. While New Zealand is famous for its natural beauty, Dominica is less well-known in general. Most people, myself included until a few months ago, can’t even pronounce the country’s name correctly. It’s called Domin-EEK-a. And, no, it’s not the Dominican Republic.

Our hike began in the tropical rainforest setting of Titou Gorge, where Pirates of the Caribbean was filmed. This “Nature Island” of the Caribbean is famed for its wildness. It boasts an untouched beauty not found elsewhere in the Caribbean, not even in the other two islands in Dominica’s West Indies chain, the “French Isles” of Guadeloupe and Martinique.

My friend, Mia, and I were being led by our tour guide, Marvin Philbert, a historian and botanist who was also adept at skincare secrets, which I’d learn later. The hike began with a climb up through the leafy green trees towards the top of a mountain. The island had been swept by hurricanes in years past, though I couldn’t imagine the landscape being any lusher than it was at the moment. We passed through Gommier trees, known as King Trees, whose bark was once used for canoes, and Chataignier Trees, or Queen Trees, so named because it looks like the tree is wearing a skirt. When we passed by a freshwater lake, a chill descended around us.

“We call this ‘Little England,'” Marvin told me.

Though the climate could not be further from the British Isle, the fog on that given day coupled with greenery that could put the English countryside to shame. The day was intermittently clear, though the “liquid sunshine” was always a possibility. When we descended the mountain, I encountered what can only be referred to as a Caribbean Yellowstone. We were truly one with nature, and what nature it was. We passed through several rivers and lakes where the water was crystal-clear (Trois Pitons River is a personal favorite).

We stopped at Breakfast River to drink water and catch our breath, before ascending up a ridge to the summit and descending to the Valley of Desolation. At 2,950 feet, this is the highest point of the hike. On a clear day, this mountaintop clearing would provide 360-degree views of Nature Island, and though it was overcast and foggy during our hike, it was no less beautiful. The steam rising above Boiling Lake in the distance commingled with the clouds and fog. The barrenness of the vegetation at the mountaintop was a stark contrast to the towering trees below.

When we descended towards Desolation Valley, an active volcanic valley, Marvin displayed an egg he had been carrying in his backpack and proceeded to place it in a plastic bag and soak it in the boiling water. We would collect it on our return trip, he told me. It would be a little treat. Another treat: Marvin applied the muddy minerals from the bubbling mud pools to my face as a natural facemask. Dominica, in fact, is the original wellness island. There are juices you’ve never even heard of, all green everything, and now, even, a goop-worthy facial. With our face masks on, Miriam, Marvin, and I looked like a very small warrior gang. Which, in a way, we were.

In the Valley of Desolation, the vibrant greens of the rainforest gave way to brown and gray, though the atmosphere made me anything but desolate. Hiking past mini-geysers, the hot springs reminded me of Iceland. You don’t need to book a flight to Reykjavik to discover such bright turquoise waters. The mountains we climbed reminded me of the Na Pali Coast in Kauai, so green and lush. With the fog surrounded the mountaintops, I felt as though we were above the clouds.

When we reached the Boiling Lake, we stopped at a crater’s ledge to overlook the vast, boiling water. At first, I couldn’t see the lake due to the steam rising off the water. It was truly a moment of feeling “into the mystic,” in the words of Van Morrison. The lake was so icy blue that it reminded me of Iceland’s Blue Lagoon. I noticed one tiny sign propped against a rock: “ATTENTION! For SAFETY reasons, Visitors are advised NOT to venture beyond this point.” If we were in the United States, we would have been blocked by caution tape at every turn.

I felt truly immersed in nature, completely removed from my surroundings. Even my attempts to take a picture on my phone were futile. There is truly no way of capturing Dominica’s beauty, anyway; you must experience it to understand. I felt overwhelmed by the wildness, the steam rising off the water. The whole landscape felt untouched by time. I didn’t want to leave.

There was so much sulfur on the rocks that you could write your name on them. It started to drizzle, though the rain would come and go. Marvin led us to go swimming beneath a waterfall in one of the natural hot springs, where we rinsed the mud masks off our faces.

On our return hike through Desolation Valley, Marvin remembered our breakfast from earlier and pulled out the boiled eggs, which had now been turned black by the minerals in the water and were ready to eat. The boiled egg and a Fruita juicebox turned out to be the unexpected breakfast of champions. We befriended some German hikers on the route back — the island still remains undiscovered by many Americans and is probably the best-kept secret in the Caribbean.

Hiking back up the mountain, it started to pour. I was cold, wet, and — after nearly 14,000 steps — I was tired. Yet I was also exhilarated. Afterward, we swam in the Titou Gorge, which reminded me, of course, of the Pirates of the Caribbean scene. I swam through the empty cave towards gorgeous hidden waterfalls. Exhausted later that evening, I returned to my enchanting hotel, Fort Young Hotel (an oceanfront resort that reminded me of properties off the coast of Italy). Yet, though Dominica reminded me of so many different places in the world, it is distinctly its own: Irreplaceable.

In today’s hyper-geotagged world, it can feel like you’ve already seen all there is to see by scrolling through your Instagram feed. My hike in Dominica was a reminder that truly transcendent wilderness experiences — and genuinely meaningful self-reflection — occur when you are disconnected from the rest of the world. When it’s raining and your jacket is soaked, mud is in your sneakers, and you’ve run out of everyday things to talk about with your friends, you end up thinking about and talking about issues too large to contemplate over brunch. What do you think happens when we die? Do you think you can have multiple lives of your life? Answers: Nothing, and of course. I discovered another great love on my hike — the country of Dominica, its wildness, and its people. But a word to the wise: Before embarking on your own mini-adventure, be sure to book a guide like Marvin, who provided not only expertise but also good company. Plus, you don’t want to be navigating a volcanic field of steaming hot springs on your own. Trust us.

RELATED: The Cold Never Bothered Me Anyway: What Husky Sledding in Finland Taught Me

Katherine Parker-Magyar
Katherine is a freelance writer focusing on travel, culture, lifestyle, and politics. Her work has appeared in The Week, Tasting Table, Elite Daily, POPSUGAR, and Electrify, among other publications. She's traveled to all 50 states and 40 countries, but calls New York City home. Follow along on Instagram at @katherineparkermagyar or visit her website at www.katherineparkermagyar.com.
Travel
Travel
Travel Vacation
More From Travel