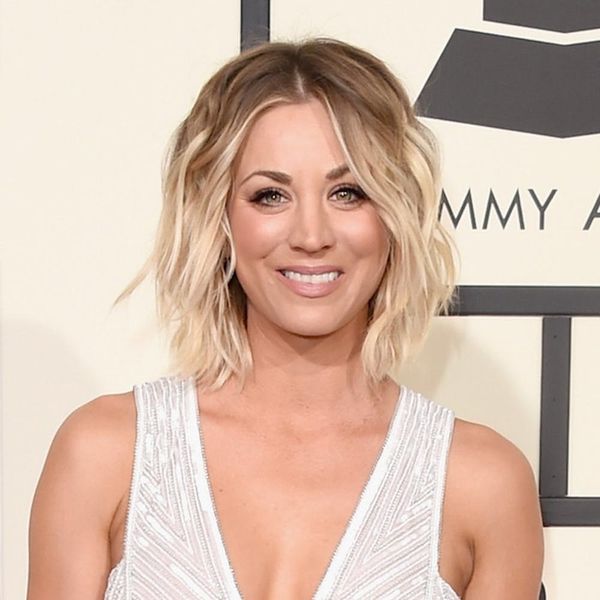 1. This is the way every TV show finale should be watched. With on-theme leggings. Last night’s Bachelor finale had fans waiting on edge to see who Ben would give his final rose to — Lauren Bushnell or JoJo Fletcher? (SPOILER ALERT: It was the former, and the latter will be the next Bachelorette.) And if you thought your snacking-and-wine sweats were as cozy as it gets, think again. Big Bang Theory‘s Kaley Cuoco and her sister Briana rocked custom leggings with the faces of both of the final girls, roses and question marks. This is a reality show finale look that could catch on. (Photo via @normancook)

My beautiful wife Laina and I are expecting our first child. 23 weeks along. Gratefully blessed on my 37th B-Day. pic.twitter.com/BFNbKhSemY

2. Chris Klein and his wife adorably announced their first pregnancy on Twitter! What a happy birthday gift indeed. Chris announced via Twitter with a simple, gorgeous photo of his wife Laina Rose Thyfault’s baby bump set against blooming flowers and greenery, that they are 23 weeks along in their first pregnancy. The best part? He got to tell the world on his 37th birthday. Aww!

3. Zac Efron needs an intervention for his selfie stick obsession. *Insert cry-laughing emoji here* Okay, so of course this is just a Funny or Die sketch, and further, looks to be an (albeit totally good and smart) ad for Zac’s new movie Mike and Dave Need Wedding Dates, but Zac Efron disrupting the set with his selfie stick obsession is the best thing you’ll see today. “Ever since Zac got a $14 selfie stick, we’ve gone hundreds of thousands of dollars over budget,” director Jake Szymanski says in the clip. “We’ve gone into overtime every day since he started bringing that selfie stick.” The video shows Zac going so far as to take a selfie of a fan taking a selfie with him. Dude, we get it — those things are strangely addictive. (h/t Funny or Die, video via @zacefron)

4. This 11-year-old beauty vlogger with arteriovenous malformation and the most fearless attitude in the world will inspire you. Nikki Christou is the latest online beauty guru you absolutely need to be following. The 11 year old has already accumulated over 2 million views on her channel, which features haul videos, makeup tips, baking and DIY videos, as well as personal glimpses into her daily life — including being open about her arteriovenous malformation, or AVM, which can cause malformations in the face. She was born with the condition, but it didn’t start to develop until she was six years old, and when she was eight, she started her channel. “It was really scary and I did feel sorry for myself at first, but then I realized there are so many things I can do,” she says in the above video. “So when I was eight, I started my YouTube channel, and created tons of best friends.” Nikki tells People that her goal is to maintain her health, and to help others who suffer from the same condition. Christou says, “[I] pray that one day our charity can fund enough research so that we can find better treatments and a cure for all AVM sufferers around the world.” YOU GO, Nikki. (h/t People)

5. This woman and her beloved cat died only hours apart. This is just proof that pets are 100% part of your family. Writer Jill Layton, in a touching essay on animal site The Dodo, tells the story of her grandmother and her beloved cat, Gabby, who shared a bond so deep that they both started slowing down in their old age together, and, ultimately, passed away just hours apart. After her grandmother came home from having Gabby put down, she laid down for a nap and never woke up. “She died four hours after Gabby. Maybe it was just her time and a strange coincidence, maybe she died of a broken heart or maybe their souls couldn’t be separated.” Jill describes the pair as “two sweet old ladies who enjoyed each other’s company.” Sob. (h/t The Dodo, photo via Judy Caponigro/The Dodo)

6. Quote of the day: “I don’t see man clothes and woman clothes, I just see scared people and comfortable people.” — Jaden Smith in GQ on his gender-defying clothing choices.