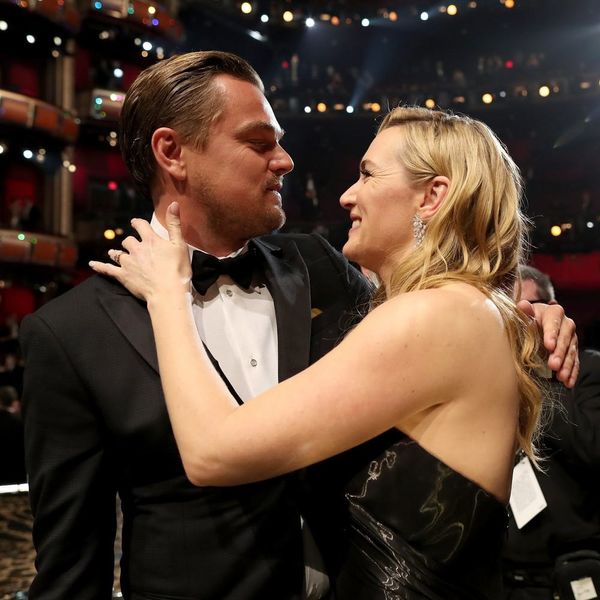 Leonardo DiCaprio and Kate Winslet first met on the set of their now-iconic movie Titanic, and in the 20 years since the film's release, their friendship has only grown stronger. Winslet recently credited their lasting bond to the fact that they "never fancied each other." Whatever the reason, we love them together — on and off screen. Here's a look at their relationship through the years, from 1997 to today. (Photos via Kevin Mazur/WireImage + Alexandra Wyman/WireImage + Kevork Djansezian/Getty Images + Anthony Ghnassia/Getty Images for LDC Foundation)
Titanic, 1997: In James Cameron's Titanic, DiCaprio, then 23, and Winslet, then 22, played doomed lovers Jack and Rose. Off-screen, though, their immediate chemistry was that of friends. DiCaprio told Entertainment Tonight at the time, "She's such a terrific person in general that our chemistry naturally happened on screen. We just like each other as people. I think that definitely showed. As far as doing a love scene, though, we laughed about it a lot." (Photo via Merie Weismiller Wallace/Paramount Pictures/Twentieth Century Fox)
Golden Globes, 1998: The stars first acted as each other's dates at the 1998 Golden Globes, where Titanic was nominated for eight awards, including Best Actor and Actress for DiCaprio and Winslet. Fans no doubt hoped their red carpet appearance meant that life was imitating art, romantically speaking, but that dream was firmly shattered at the Oscars a month later — Winslet was nominated, DiCaprio was not — when the actress showed up with the man she would marry a few months later, Jim Threapleton. (Photo via Kevin Mazur/WireImage)
Golden Globes, 2007: DiCaprio and Winslet didn't walk the red carpet together for several years after 1998, but they frequently praised each other in interviews throughout the early 2000s. In a 2004 chat with Oprah Winfrey, DiCaprio said Winslet was his favorite on-screen kiss. "Oh boy. There's going to be some mad actresses. … I'm just going to go with Kate Winslet, good old classic." When Winfrey showed footage of the actress talking about their friendship in an earlier interview, DiCaprio affectionately said, "That's my girl!" (Photo via Alexandra Wyman/WireImage)
Vanity Fair's Oscars Party, 2007: Though they weren't photographed together at the 2005 SAG Awards — this photo is from an Oscars afterparty two years later — Winslet crashed his interview with Extra on the red carpet, gushing that she was "so proud that [he had] turned into this really special person." DiCaprio responded by telling his pal, "I love you, sweetheart." (Photo via Eric Charbonneau/WireImage for Vanity Fair Magazine)
Revolutionary Road Premiere, 2008: In 2008, the pair reunited on screen, playing a couple in crisis in Revolutionary Road, which was directed by Winslet's husband at the time, Sam Mendes. (Photo via Alberto E. Rodriguez/Getty)
Golden Globes, 2009: Winslet won two Golden Globes in 2009 — for The Reader and Revolutionary Road — and tearfully thanked her BFF in her second speech of the night. "Leo, I'm so happy I can stand here and tell you how much I love you and how much I've loved you for 13 years. … I love you with all my heart, I really do," she gushed. Cameras caught DiCaprio blowing a kiss to his bestie in appreciation. (Photo via Kevork Djansezian/Getty)
Revolutionary Road UK Premiere, 2009: After the Globes in 2009, DiCaprio Skyped in to The Oprah Winfrey Show during Winslet's appearance on the program, and he couldn't say enough good things about her or their friendship. "In a lot of ways, Kate and I, we've grown up in this industry together," he said. "We've been a support mechanism for each other for such a long period of time. We've been there for each other and helped guide each other." (Photo via Dan Kitwood/Getty)
SAG Awards, 2016:When Winslet married Ned Rocknroll in 2012, it was a top-secret ceremony. (According to some reports at the time, the couple's parents didn't even know about it beforehand.) They didn't invite a lot of people, but DiCaprio made the cut — and even walked his longtime friend down the aisle. (Photo via Dimitrios Kambouris/Getty Images for Turner)
Oscars, 2016: When DiCaprio finally won his first Oscar, for his role in 2015's The Revenant, his friend was there to cheer him on. Many stars boycotted the Oscars that year because of the #OscarsSoWhite controversy, but Winslet told Vanity Fair she had chosen not to because of DiCaprio. "I feel very strongly that it may possibly be Leo's year," she said. "He is my closest friend in the world and I just couldn't imagine not being there to support him." She even opted to walk the red carpet with her BFF instead of with her husband, and she was the first to stand up and applaud when his name was announced as the winner. (Photo via Christopher Polk/Getty)
Leonardo DiCaprio Foundation Saint-Tropez Gala, 2017: In August 2017, Winslet spoke of her friend with Glamour UK, telling the mag that they're as close as ever, and that, yes, they do still recite their lines from Titanic to each other. "You don't even want to know the last conversation we had, because it was so funny and made me laugh so much," she shared. "We found ourselves saying to each other, 'Can you imagine if the world really knew the stupid things we say?'" We're all ears. (Photo via Anthony Ghnassia/Getty Images for LDC Foundation)

Do you have a friendship in your life like Kate Winslet and Leonardo DiCaprio’s? Tell us @BritandCo.