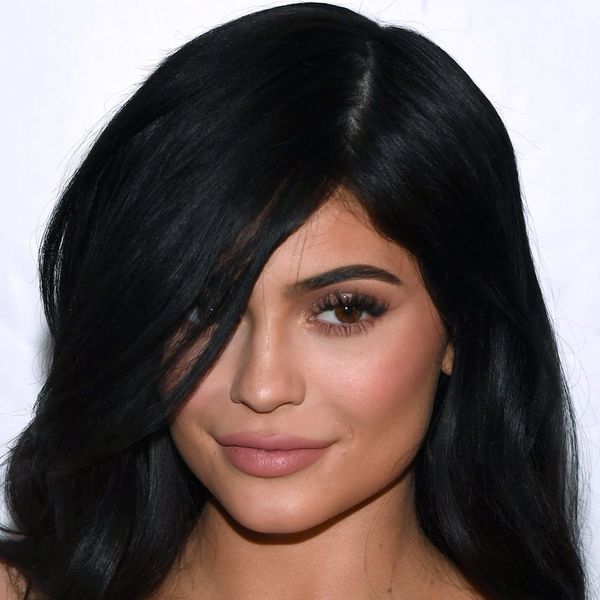 Kylie Jenner never leaves fans short of things to chitchat about when it comes to life (soon to be documented in her very own reality show, Life of Kylie). From drama over her branded merch to more personal tidbits, like juicy gossip about her dating life, girl knows how to make a splash. In fact, her latest move — or rather, jewelry choice — has fans thinking — again — that the littlest Jenner might be engaged.

The beauty mogul was spotted out and about with a flashy diamond ring on *that* finger, and since her bae Travis Scott was wearing one as well, people naturally took it to mean that the pair could soon be tying the knot. As you may recall, it’s far from the first time Jenner has set the rumor mill churning with wedding talk: Last year, fans were convinced she’d soon be walking down the aisle with then-boyfriend Tyga for the exact same reason.

As can be seen in the blown-up photo, the double-banded ring in question is hard to miss, taking up a sizable chunk of her ring finger, while Scott was seen sporting a similar look over on his Instagram.

Some people are convinced it’s the real deal this time around.

Kylie Jenner is ridiculous. Already got matching tattoos anddddddd wearing wedding rings with Travis Scott. Like girl did nobody love you?

Others aren’t so sure, citing alternate rumors that Scott and Jenner (who also have matching tats) aren’t exactly doing the greatest at the moment and could be just days away from a breakup.

So, either they’re already planning their honeymoon, or the honeymoon period has already worn off and there’s trouble in paradise. Either way, we’re sure we’ll find out soon: Life of Kylie debuts August 6.

What do you think about Kylie Jenner’s ring: innocent or proof of wedding bells? Tell us @BritandCo!

Shea Lignitz
Shea can be found in the nearest bookstore or brewery, exploring the great outdoors, or blasting Led Zeppelin. She grew up in the cold and rain of Northern California's redwoods but is currently wandering around Texas.
Engagement Rings
Celeb Style
Engagement Rings Kardashians rings