5 Lessons on Love + Life I Learned from Jackie Kennedy Onassis 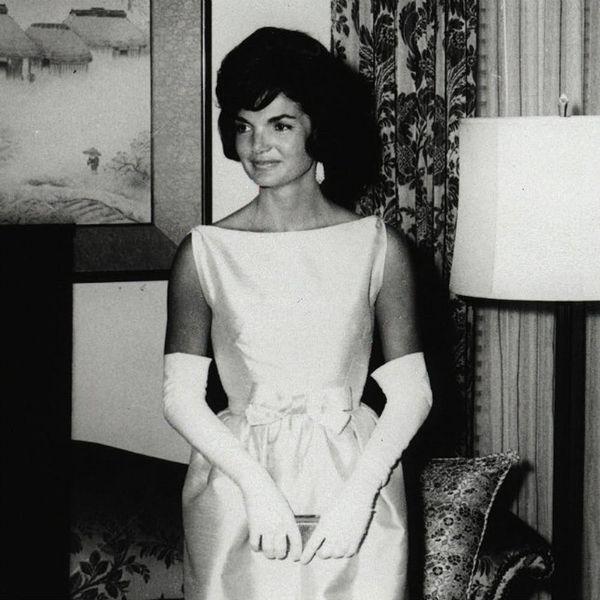 As it almost always happens, I fell woefully behind in my efforts to catch all the Oscar-nominated films this year. La La Land was the only movie I saw that really had people talking throughout awards season, even though from Moonlight to Fences, it seemed like an especially strong year for the big screen. That doesn’t mean I totally missed out on all the buzzed-about movies, though. I did make it to the theater to see the one film I’ve been obsessed with ever since I saw the trailer: Jackie.

For weeks after I saw the first clips of the ever-perfect Natalie Portman rocking those beautiful costumes and crying heartbreakingly in the shower, I scoured the internet for more information about the movie. Having grown up with a vague understanding of the mystique of the Kennedy White House (and having attended the same college as Jackie herself, George Washington University), I couldn’t wait to see how one of my favorite actresses would portray the glamorous First Lady. As soon as I could find Jackie playing locally, you can bet that I was there.

Natalie’s depiction of Jackie was (obviously) stunning, and the solemn film gave me the peek into American history that I’d been wanting. Still, I left the theater feeling like I needed to know so much more about the Kennedys, especially the woman that we’ve all come to know as “Jackie O.” My research led me to the book Grace and Power: The Private World of the Kennedy White House — a 600-plus page tome that I bought despite my usual aversion to reading non-fiction.

What I learned from reading the book (other than just how much easier it was for public figures to hide their personal indiscretions in the pre-Google era) was that Jackie wasn’t just a poised, fashionable first lady. She was savvy, independent, and a strong and caring mother. While her marriage was far from perfect, there’s a lot to be learned from Jackie’s approach to love and life.

5 lessons I learned from Jackie Kennedy

1. Don’t be afraid to pursue the things that make you happy, even if you have to do it alone. Jackie and JFK didn’t share a lot of interests. She loved being outside, in the peace of nature with her horses, and he wasn’t a huge fan of rural living. Despite the fact that it took her away from her husband, Jackie pursued her lifelong passions by riding in shows and hunts throughout their marriage, which is a good reminder to all of us that you and your S.O. don’t need to be joined at the hip. The Kennedys did celebrate their shared interests (reading, entertaining, the arts) whenever possible, and they did it passionately. We can all take a page from their book here: Enjoy things with your partner when you can, but not at the expense of the things you care about independently.

2. Don’t air your relationship’s dirty laundry. Despite his many contributions to our country’s history, it’s no secret that the 35th president was no angel. Everyone knows about Marilyn Monroe’s famous birthday serenade, but JFK’s tendency toward extramarital lovin’ ran way deeper than that, and it went on throughout his marriage to Jackie. While I have some seriously mixed feelings about the idea of “turning a blind eye” to cheating, I have a lot of respect for the fact that Jackie didn’t use her platform as First Lady to humiliate her husband for his actions. She rarely spoke of Jack’s affairs while he was alive, and even then, only among the closest company. Fast forward 50 years, and we all know how difficult it can be to keep certain elements of our private life off of social media. Jackie’s example is a reminder that no matter how challenging things can look inside your relationship, it’s best to handle those serious issues directly with your S.O.

3. Surround yourself with beauty. Jackie’s primary project as First Lady was restoring the White House. She put together a task force to help her track down antiques and decor that would make the mansion a monument to its history. The Kennedys also made a great effort to bring art and culture to Washington. At the time, many Americans questioned these endeavors, particularly the restoration, which was seen by some as frivolous and overly expensive. Jackie continued with her projects anyway. She saw the value in surrounding herself and her loved ones with beautiful items, and in enjoying art for art’s sake.

4. Know when you need a break — and take one. When things got stressful in Washington, Jackie wasn’t afraid to escape. She frequently took her children to one of the Kennedys’ many vacation homes, where they could spend time together away from the public eye. While most of us aren’t lucky enough to have easy access to multiple getaway locations, we can follow her lead to a smaller degree. It’s important to know when you need to press pause — whether you’re the First Lady or just a burned-out 20-something — and even more important to actually do it. More often than not, self-care is more crucial than proving yourself to other people.

5. Understand your legacy. Mostly thanks to Hamilton, we’ve been hearing a lot about the word “legacy” lately. You know — “who lives, who dies, who tells your story?” Like Alexander and Eliza Hamilton before her, Jackie took her legacy (as well as her husband’s) very seriously. She wanted JFK to be remembered for his achievements (not his affairs), and she sought to leave her own mark on Washington as well. Even though those of us outside of the White House may not always feel we have the opportunity to leave an official “legacy,” we do have the power to make a lasting impact in our families and communities.

What lessons have you learned from your favorite ladies of history? Tweet us @BritandCo!