How to Prepare and Cook Jackfruit, the Latest Vegan Food Trend 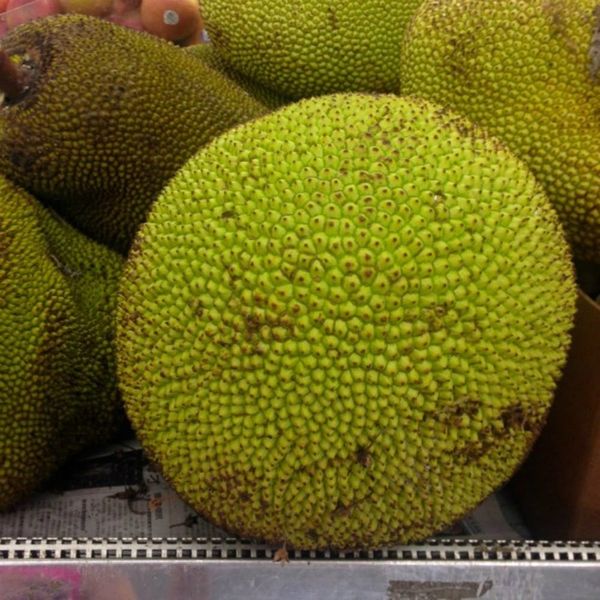 Being vegan or vegetarian doesn't mean your cravings for your old favorite foods just suddenly disappear. But it can be hard to replicate the flavors of the meaty meals you long for. Enter jackfruit. The starchy and fibrous fruit can be used in all kinds of recipes, like pulled jackfruit nachos and pulled “pork" sandwiches, making it easier than ever to go meat-free. But cutting and preparing it can be a bit tricky. Follow these 10 tips before you start cooking with the latest miracle food.

How to Prepare Fresh *Ripe* Jackfruit

If you’re buying fresh jackfruit at the store or farmers’ market, you’re mostly likely going to find ripe jackfruit, which is very sweet and best eaten as a dessert and not in savory applications. Jackfruit oozes a sticky latex-like substance when cut open, so you’ll want to oil your hands and knife before getting started. And don’t forget to save the seeds, which are edible too. (Technique + Recipe via She Simmers)

How to Prepare Fresh *Unripe* Jackfruit

Fresh unripe, green jackfruit is what’s used in savory dishes. It can be hard to break apart, and oozes even more sticky stuff than ripe jackfruit, but all the work is worth it once dinner’s cooking. (Technique + Recipe via More Vegan Blog)

How to Use Canned Jackfruit

Canned jackfruit is a total timesaver. In brine or water, green jackfruit is easy to turn into a wide variety of recipes, including this vegan pulled pork — just sauté until tender, then stew in flavorful liquid. (Technique + Recipe via More Vegan Blog)

Boiling jackfruit seeds until they’re soft like beans or potatoes opens them up to being used in a few different ways. Here, they’re blended into a creamy garlic hummus. (Technique + Recipe via Sweet Simple Vegan)

Jackfruit seeds can be stir-fried to make a hearty and nutritious vegetarian meal. Their texture is similar to that of roasted chestnuts once boiled, but they get nice and crispy after being fried with oil and spices. (Technique + Recipe via The Tastes of India)

For vegetarians craving seafood, jackfruit is the answer to a culinary prayer. Chickpea “tuna” salads hit the mark with flavor, but only jackfruit can give your no-tuna salad the same texture as the real thing. (Technique + Recipe via Nutritional Foodie)

Vegan Philly cheesesteak sounds like an oxymoron, but thanks to jackfruit it’s a possibility. Marinated jackfruit is slightly charred, giving it the meaty flavor of shaved steak that makes the original sandwich so irresistible. (Technique + Recipe via Fettle Vegan)

Hearty beef stews aren’t out of reach for the vegetarian who has jackfruit on hand. Stewed until tender and falling apart (like in this jackfruit stroganoff), it helps anyone indulge their comfort food cravings. (Technique + Recipe via Nourish Atelier)

You can make a satisfying gyro approximation using jackfruit on its own, but it’s even more convincing when paired with mushrooms. Together, these veggies offer up a savory, crispy gyro “meat” that you’ll want to pile on fries, wrap in pitas, and eat straight out of the pan. (Technique + Recipe via I Love Vegan)

Finally, soy-free vegan chicken that actually tastes like the real thing. Pulled jackfruit is smothered in Buffalo sauce to create a sandwich you’d swear wasn’t actually vegetarian. (Technique + Recipe via Fettle Vegan)
From Your Site Articles
Related Articles Around the Web
Justina Huddleston
Justina Huddleston is a food writer living in Los Angeles. When she's not busy writing, she spends her time in the kitchen creating both virtuous and decidedly junky vegan food. Buffalo chickpea pizza, anyone? She's also been known to eat a plain block of tofu or beans straight out of the can for lunch, but somehow those culinary adventures don't make it to her Instagram. You can follow Justina on Twitter or see what's cooking in her kitchen on her blog, A Life of Little Pleasures.
Food Trends
Healthy Eating
Food Trends Healthy Recipes recipe roundup
The Conversation