21 Vegan Taco Recipes That Don’t Come from a Box 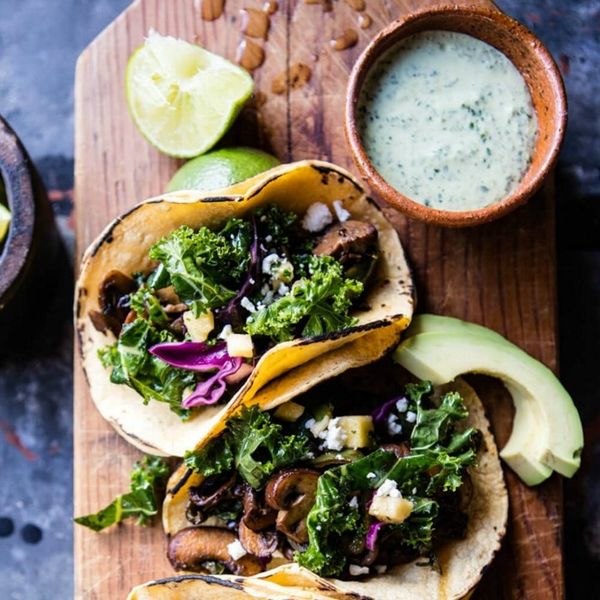 Taco night is the best night of the week. Growing up, most of us had our fair share from a box, but now that we’re adults it’s time to get a little fancier (think: vegetarian tacos, pancake tacos, and even sushi tacos, no pre-packaged spice mix or stale taco shells in sight). And don’t think vegans are left out of the tastiness. Ahead, these 21 vegan recipes will make you want to have taco night every night.

Try out a new flavor profile with these crispy tofu tikka masala tacos. They’re topped with a spicy chili cashew crema that will leave your lips tingling. (via Vegetarian Gastronomy)

Avocado makes the slaw that tops these tacos surprisingly creamy. Combined with a spicy, saucy spaghetti squash filling, don’t be surprised if you reach for a second helping. (via Oh My Veggies)

Tacos are always delicious, but the best ones stand out because they’re so well balanced. This version, filled with spicy black beans and a crunchy citrus slaw, fit the bill. (via Fettle Vegan)

Tacos for breakfast are always a good idea, especially when they’re this hearty. Delicata squash and an avocado cream tucked into a tortilla will keep you going all morning. (via 8th and Lake)

Sometimes simple is best, and these tacos make the most of that credo. Creamy potatoes are tucked into a crispy shell along with some crunchy apple matchsticks in this easy recipe. (via The Devil Wears Parsley)

Here’s a trick to make your mushrooms more flavorful. Marinate them in beer, upping their umami to make for tacos that even omnivores will devour. (via Connoisseurus Veg)

Charred corn, smoky and sweet, adds a little something special to these tacos. Jack fruit, cabbage, and a lime vegan lime crema round things out for a meal that’s a party in your mouth. (via Little Vegan Bear)

Meaty mushrooms make these tacos a worthy adversary of a large appetite. They’re joined by a creamy cilantro yogurt sauce that help the rest of the flavors in the taco pop. (via Half Baked Harvest)

Mac and cheese tacos are pretty much the best thing you can make yourself for dinner. This vegan version adds black beans and some veggies, keeping things light and fresh while still being creamy and indulgent. (via Keepin’ It Kind)

If you love fusion food, then these are the tacos for you. Sweet, tangy orange tempeh is the star of the dish, which is paired with fresh, crunchy veggies to make a complete meal. (via Euphoric Vegan)

Jackfruit has an amazing way of imitating pulled pork. Combined with grilled pineapple, it makes for a mean vegan taco that’s as close to tacos al pastor as you can get. (via Super Golden Bakes)

Colorful veggies, beans, and mushrooms abound in these tacos. Jalapeños and hot sauce add a spicy kick for any chili-heads in the family. (via Nutritionist Meets Chef)

We love the combination of fruit with savory ingredients, especially when it’s topped by a chipotle peach sauce. (via Unrefined RD)

Crispy plantains and creamy beans work in tandem to make these tacos unbeatable. Tangy pineapple ups the flavor ante, and guacamole gives the dish a finishing touch you won’t be able to stop raving over. (via Spill the Greens)

The combination of sweet potato and smokey chipotle gets us every time. Chickpeas make these tacos even heartier, but a tangy avocado lime dip keeps them from getting heavy. (via Cook With Manali)

If you’re afraid you’re not getting enough veggies, try these universally appealing taquitos. (via Thyme and Love)

One Tray Tacos With Mango Salsa

Vegan cooking doesn’t have to be a hassle. These tacos are made using one baking sheet, and then topped with a tropical mango salsa for extra zing. (via Lauren Caris Cooks)

Purple cabbage and orange sweet potatoes make this dish as visually stunning as it is delicious. Avocado cream adds a touch of green to make it a truly delicious edible color palette. (via Making Thyme for Health)

Anyone who thinks tacos are casual should take a look at this dish. Contrasting yellow and purple cauliflower make for a vibrant vegan dish that’s totally dinner party-worthy. (via May I Have That Recipe)

Spicy Buffalo cauliflower is one of the best things about eating vegan food. It’s increasingly found on menus at all kinds of eateries, and feels totally at home in these tacos. (via Emilie Eats)
From Your Site Articles
Justina Huddleston
Justina Huddleston is a food writer living in Los Angeles. When she's not busy writing, she spends her time in the kitchen creating both virtuous and decidedly junky vegan food. Buffalo chickpea pizza, anyone? She's also been known to eat a plain block of tofu or beans straight out of the can for lunch, but somehow those culinary adventures don't make it to her Instagram. You can follow Justina on Twitter or see what's cooking in her kitchen on her blog, A Life of Little Pleasures.
Dinner Recipes
Healthy Eating
Dinner Recipes Healthy Recipes recipe roundup tacos Vegan Recipes
The Conversation