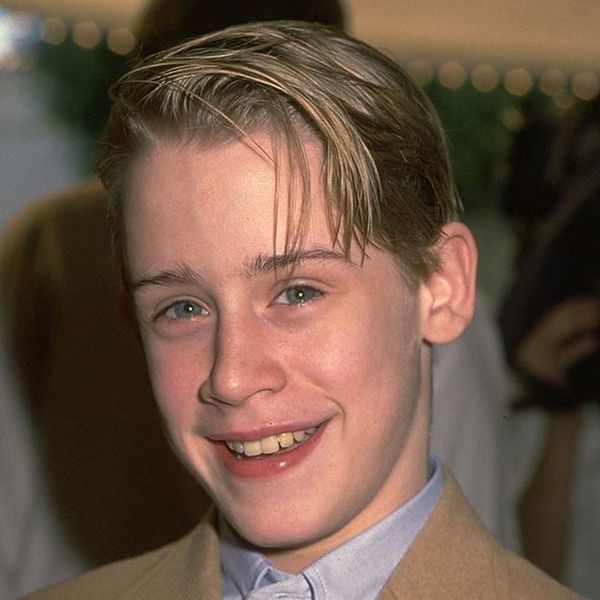 Remember the late ’80s and early ’90s when we had so much Macaulay Culkin in our lives — there was Uncle Buck + My Girl in addition to Home Alone, The Good Son + Richie Rich. Then once we got to the ’00s the child actor decided to live a quieter life out of the spotlight and now we only get glimpses of him once every few months. Admittedly we kinda lost our minds last summer when he posed for a very Ryan Gosling meta moment but his latest spotting has our collective hair inspo hearts a-beating. Man buns, they’re for the kids, men + former child stars ;)

Over the weekend the 34-year-old was spotted for the first time since April strolling through SoHo in NYC rocking a man bun. While the man bun alone is impressive enough — seriously, it’s hard work to grow out + style those tresses correctly — there was something more eye-catching than the hairstyle alone. That would be the pink dye he’s rocking too, making Macaulay’s man bun more unique than your average guy’s. Then again, it is Macaulay we’re talking about, why would he disappoint us with just another average man bun?!

It’s worth noting that not only could the Home Alone actor inspire men (and women) to add a tinge of pink to their hair, but he could also be providing plenty of men inspo for their hands as well. That’s right, Macaulay was also spotted with red nail polish on those digits. Whether it’s in solidarity with Caitlyn month’s after her Diane Sawyer interview or Macaulay’s own personal style we would totally be down with guys L + R adding some color to their hands.

What are your thoughts on Macaulay Culkin’s dyed man bun? Let us know in the comments.