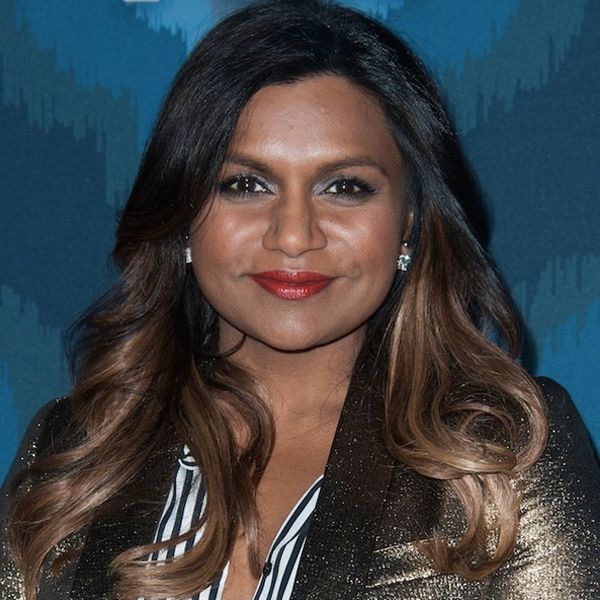 It is a truth universally acknowledged that Mindy Kaling is practically perfect in every way. She’s pretty much our fantasy BFF because of her humor, her career path and her seriously drool-worthy style. If you’re having a case of the Mondays, you really need to read what Mindy has to say about shaking off the creative fog.

Adweek just named Mindy one of their Creative 100 and she’s in crazy good company (Neil Degrasse Tyson, Shonda Rimes and Amy Schumer to name a few). And if that wasn’t cool enough, she nabbed the cover (+ delivered the perfect pic to tack up in your cube on your Wall of #Girlbosses). But the really good stuff can be found inside its pages, where Mindy drops major truth bombs about how to find creativity even in the hardest situations. Here are four inspiring tidbits to take away.

1. Go watch something good: Feeling slumped on a creative project? Mindy says when she feels that way the best cure is to “see something wonderful that I love.” Trying to write? Read an inspiring new book or one influence by your childhood. Making a video? Take a break and watch some of these cool Netflix originals. Seeing examples of the type of success you’d like to achieve can help rev up your own inspiration.

2. Have imaginary mentors: When trying to get interested in a new project or stir up motivation to work on an existing one, Mindy says it helps to picture someone you want to impress egging you on. When she was having trouble with a script, Mindy says she went to see a movie written by Noah Baumbach. “Noah Baumbach is such a great writer and his dialogue is so funny,” she says. “It made me think that in my mind, there’s an imaginary Noah Baumbach that I wanted to impress.” Personally, we conjure up an imaginary Mindy every now and then, but there are also plenty of other game-changing role models to go around.

3. Think outside the desk: We’ve all been there, lounging on our beds with our laptop propped on our bellies using it as a heating pad. According to Mindy, that could actually be the optimum productivity position. She says she’s written 50 television scripts and two books from that position and as we’ve seen they’ve all be great. Mindy thinks “the lack of the formality of a desk makes me feel really comfortable.” Basically, she’s given you permission to stay exactly where you are, plus we’re guessing pants are optional.

4. Failure isn’t a thing: Mindy has had her share of career up and downs, from struggling on the New York stand-up scene to the recent cancellation of her show The Mindy Project. When asked if the show’s cancellation worried her, Mindy kept it cool saying,”I refuse to create things under the assumption of failure.” Her optimism and forward-thinking paid off, and now the show has a new home (hello, longer episodes) on Hulu. Channel Mindy today and believe that anything is possible.

Is your working style more Mindy Lahiri or Kelly Kapoor? Tell us in the comments!

Molly Sanchez
Molly Sanchez is a writer, comedian and lover of burritos everywhere. She has written for The Bold Italic, Liquid Bread, Thrillist and HelloGiggles. She devotes her time to Bloody Mary research, exploring San Francisco and promoting wide spread shower beer awareness and appreciation. Find her on Twitter @seriousmolly trying to get famous people to laugh at her jokes or on Instagram @mollyfuckingsanchez where she swears a lot.
Home News