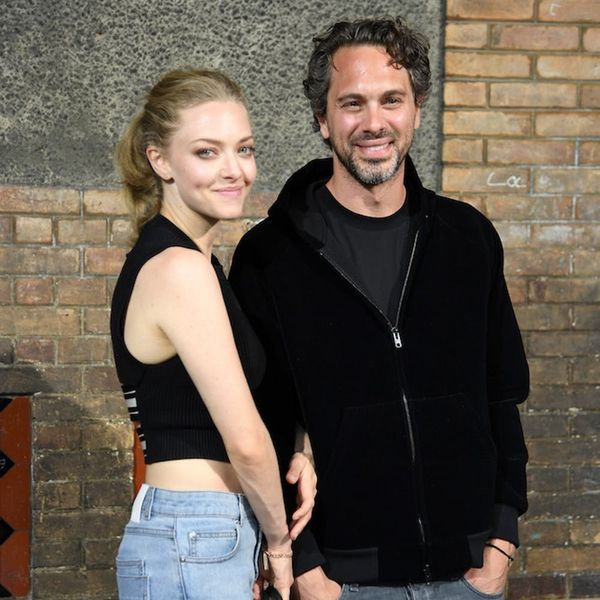 TGIF, y’all! Get your day going with today’s top tidbits of news, which include a super-romantic secret elopement and the return of Tyra!

1. Amanda Seyfried is a married woman! Amanda Seyfried and her now-husband Thomas Sadoski eloped on Sunday, Sadoski confirmed to The Late Late Show host James Corden. The actor interrupted Corden to call Seyfried his wife and show off a new wedding band. “We just took off into the country with an officiant and just the two of us, and we did our thing. It was perfect,” he gushed. It’s been a whirlwind romance for the pair, who got engaged, got pregnant, and have now gotten married, all within the span of six months. Congrats to the happy couple! (Photo via Kevin Winter/Getty)

2. She’s baaaaaack! Tyra Banks will return to ANTM as the head judge. After leaving the show last year and handing over the reigns to pop singer Rita Ora, Banks announced on Thursday that she would be returning to teach the world to smize for cycle 24. “I missed my ANTM baby so Mama’s back!” Banks tweeted. There were no hard feelings from Ora, who welcomed the OG host back by tweeting that it had been an “honor and pleasure” being on the show.

3.Marion Cotillard just welcomed a baby girl. Cotillard first announced she was expecting her second child with husband Guillaume Canet in the heat of the Brangelina divorce drama, when she was rumored to have caused the couple’s split. Luckily, the unwarranted buzz quickly dissipated, and Cotillard’s rep has confirmed to People that she and Canet have happily welcomed a new daughter into the world. So sweet! (Photo via Francois Durand/Getty)

4. Demi Lovato’s diamonds are sparking engagement rumors. Lovato and new BF, MMA fighter Guilherme “Bomba” Vasconcelos, spent some super adorbs time in Disneyland for Vasconcelos’ birthday, and while their PDA snaps were to be expected, the solo selfie Lovato Snapchatted is the one we’re most curious about! In the shot, Lovato is wearing a diamond band on *that* finger. We know that isn’t necessarily a big deal, but it DOES make one curious! (Photo via Demi Lovato/Snapchat)

5. Urban Outfitters is in big trouble with Coachella for trademark infringement. UO sister site Free People is in some hot water after the retailer was found selling several Coachella themed items. This goes beyond “this fringed floral romper would be perfect for Coachella,” kinda thing, though: We’re talking items with the fest’s actual name in their title, such as the Coachella Mini Dress, Coachella Valley Tunic, Coachella Boot, and more. According to WWD, Coachella claims that UO is “trading on the goodwill and fame” of the festival, and is misdirecting customers through Google ads that display the products when searching for Coachella. Yikes! (Photo via Jason Kempin/Getty)

What are your St. Paddy’s Day and weekend plans? Let us know @BritandCo!