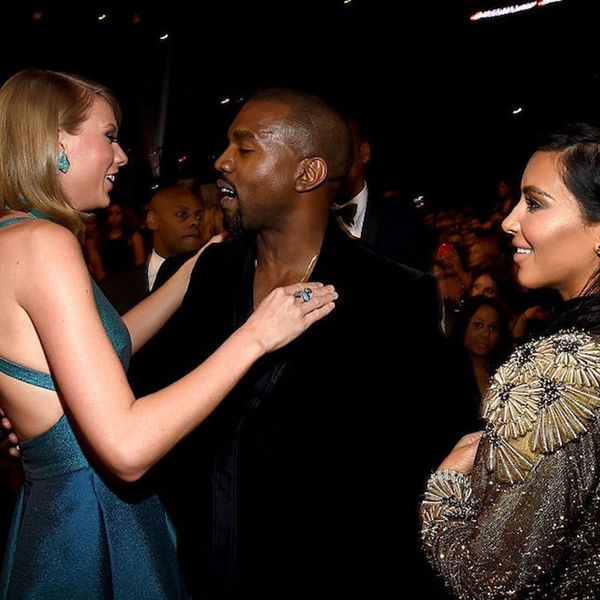 1. We don’t need to remind you about what started this year’s drama between Taylor Swift, Kim Kardashian and Kanye West. With Kanye still performing “Famous” every night on his Saint Pablo Tour (including *three* times in Taylor’s hometown Nashville), it’s been hard to forget. Now, an earlier demo version of the song has come out, and it reveals a much worse variation on the infamous Taylor-bashing lyrics. What was originally “I feel like me and Taylor might still have sex,” says “I feel like Taylor Swift still owe me sex” in the demo. The line “I made that b***h famous,” which is the line Taylor claims she never knew about and has issue with, still follows. Then, Kanye repeats the lines but replaces Taylor with Amber Rose. Can’t help but wonder what would have went down if that version had come out. (h/t Complex, photo via Larry Busacca/Getty)

A BEAUTIFUL LIFE: As she models this season’s must-have pieces, #VictoriaBeckham shares her health and beauty secrets and talks about launching her own makeup line with #EsteeLauder in #THEEDIT. Photograph by @TomCraig. Styled by @CathyKasterine

3. Khloe, Kendall and Kylie have all cancelled appearances, following Kim Kardashian’s robbery. The Kardashian-Jenner family is taking big steps to stay out of the spotlight after Kim’s traumatic robbery in Paris earlier this week. Not only has E! announced the indefinite suspension of filming the brood’s reality show, but Kim’s sisters are cancelling appearances as well. Khloé was reportedly set to promote the paperback release of her Strong Looks Better Naked book, while Kylie and Kendall’s second novel Time of the Twins: The Story of Lex and Livia, was to be celebrated with a book signing, but according to US, all signings have been cancelled. (Photo via John Sciulli/Getty)

Lylah Ninja Warrior in the Denver City Finals! Her practicing everyday on the playgrounds around our neighborhood has really given her the strength for this course. This years course got much more involved and would not fit in the house. There are bigger plans for next year and Lylah could use some support. Visit her GoFundMe page if you want to help out. https://www.gofundme.com/lylahninjawarriorJukin Media Verified (Original)* For licensing / permission to use: Contact – licensing@jukinmedia.com

4. This dad built his daughter a Ninja Warrior training course in her backyard and it’s going viral. No doubt — we’re totally obsessed with this! Not unlike little Lylah MacCall is obsessed with the show American Ninja Warrior, so much so that her dad built a backyard obstacle course for her. “Her practicing every day on the playgrounds around our neighborhood has really given her the strength for this course,” he said on Facebook. “This year’s course got much more involved and would not fit in the house. There are bigger plans for next year.”

5. Bruno Mars just put out his first new song in four years, and it couldn’t be the more perfect Friday song right now. After teasing on Twitter that he was going to release the single last night, Bruno also decided to release the album cover, then just went full hog and dropped the Vegas-inspired video for “24k Magic.” Warning: The disco-funk track will get stuck in your head IMMEDIATELY.

6. Quote of the day: “All people smile in the same language.” An old proverb to keep in mind for #WorldSmileDay today.

What makes YOU smile without fail? Let us know over @BritandCo!