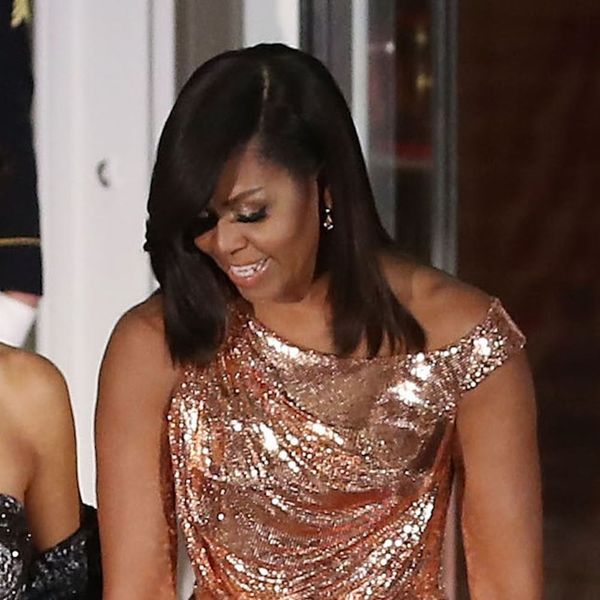 Happy hump day, y’all! From another Michelle Obama stunner to some good (or bad?) news about your favorite mobile game, check out six of today’s top news items below.

1. In the wake of the drama-filled Presidential election, Michelle Obama has been making her own headlines for being as classy as ever and quietly changing the course of American history. And at the final state dinner to be hosted in the White House under Barack Obama’s presidency, she again made headlines with her fashion choices, going all out with a stunning, shimmering custom rose gold Versace gown. “I am humbled and honored to have the opportunity to dress the First Lady of the United States Michelle Obama,” Donatella Versace said in a statement about making the gown. “Thank you Michelle for all of the things you have done for America and for the rest of the world, for the women in the United States and the rest of the world.” *Wipes tear* (Photo via Shawn Thew – pool/Getty)

2. Emma Stone’s Britney Spears impression is almost better than Britney herself. In the latest installment of Vogue‘s “73 Questions” series, Emma Stone gives a tour of her LA home while answering “random” (see: highly scripted and rehearsed) questions about, well, everything. When asked what her best celebrity impression was, Emma *flawlessly* delivered the intro to “…Baby One More Time,” and we could have SWORN it was Brit herself. Nicely done, Emma. Check it out above.

Happy birthday buddy! @ZacEfron you will always be the Troy to my Sharpay. ❤️ you brother! pic.twitter.com/Fim9q6oRAK

3. Ashley Tisdale posted the most amazing High School Musical throwback for Zac Efron’s birthday. “You will always be the Troy to my Sharpay,” she wrote, accompanied with a pic of them from the HSM days. He replied, “And you’ll ALWAYS be my Ashley. Thanks luv.” And then we died.

4. Taylor Swift has reemerged on Instagram to share some music. Okay, so it’s not NEW music, but a clip of her playing oldie-but-goodie “Fifteen” as she rehearses for her upcoming Grand Prix concert. Could this be part of a slow rollout of Taylor’s return to social media dominance after all the drama she’s been through this year?

5. It’s time to turn your phone addiction toward your TV, because there’s going to be a Candy Crush TV show. Holy crap. CBS has greenlit a huge live-action game show based on the mobile game that you are more than familiar with. According to EW, the show will be produced by Matt Kunitz, who also made ABC’s Wipeout and NBC’s Fear Factor, so you KNOW it’s in good hands. (Photo via Alberto E. Rodriguez/Getty)

6. Quote of the day: “The only true wisdom is in knowing you know nothing.” Some philosophical words from Socrates to consider on this #WisdomWednesday.

What are some words of wisdom you often return to? Let us know on Twitter @BritandCo!