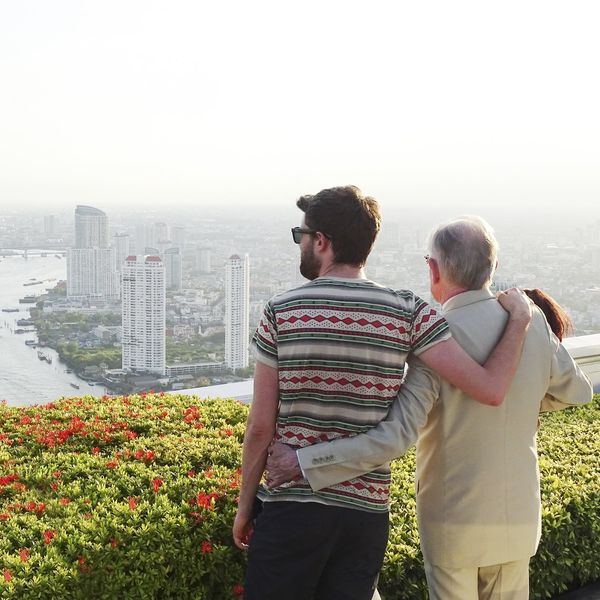 You don't need millions of dollars to see the world — just a Netflix subscription and a comfy couch. Whether your dream vacation involves making memories with your family, tasting local cuisine, or wandering off the beaten path, there are plenty of shows that feature culture-savvy hosts on globetrotting journeys that will speak to your particular type of wanderlust. So while you're planning your next trip, check out these Netflix originals for a little inspiration. (Photo via Hilary Whitehall/Netflix)

Jack Whitehall: Travels With My Father: English comedian Jack Whitehall is much more laid back than his father, Michael — which makes them hilariously quirky travel buddies. As they visit far-off lands and seek out adventures in an effort to bond, they have to navigate both their international itinerary and their odd-couple relationship. Michael sums it up perfectly while describing a somewhat odd experience on the beach, telling his son, "It's rather nice. Weird, but nice." (Photo via Netflix)

You vs. Wild: Bear Grylls' life is in your hands, and his next adventure is up to you. This interactive series allows viewers to guide the survival expert through a daunting journey, making decisions for him as he traverses dangerous terrain and tackles jaw-dropping outdoor feats in extreme climates while trying to make his way back to civilization. Should Bear jump down a cliff, face off with a wolf, or eat a plump grub? You decide! (Photo via Netflix)

Ugly Delicious: On this foodie-beloved show, James Beard Award-winning chef David Chang enlists the help of his famous friends — including TV host Jimmy Kimmel and actress Gillian Jacobs — to explore the history and evolution of various dishes, like tacos and pizza, that have become staples in American cuisine. But instead of indulging in typical fine dining at exclusive hot spots, Chang encourages his companions (and viewers) to broaden their horizons by not only seeking out hidden gems but also digging into each dish's place in the culture where it originated. (Photo via Netflix)

Somebody Feed Phil: Phil Rosenthal is probably best known as the creator of Everybody Loves Raymond, but these days, he's in front of the camera instead of behind it. A newer version of his 2015 PBS series I'll Have What Phil's Having, this Netflix show features Rosenthal traveling to places like Tel Aviv, Mexico City, New Orleans, and Bangkok to try delicious, mouthwatering cuisine. It'll make you want to pack your bags to immediately head off to his latest destination. (Photo via Netflix)

Salt, Fat, Acid, Heat: Chef and food writer Samin Nosrat truly embraces a love of travel, other cultures, and delicious delights. With an infectious enthusiasm that radiates through the screen, she's like a globe-trotting, focaccia-loving BFF guiding you through the hillsides of Italy to collect olives, or digging into the traditional soy sauce-making process in Japan. (Photo via Adam Rose/Netflix)

Our Planet: This stunning Netflix documentary will leave you in awe of the beauty that can be found on our planet, but will also show you the stark reality of how climate change affects the animals we love and need to protect. Using cutting-edge technology, Our Planet offers glimpses into places you'd never be able to witness otherwise, allowing you to see the wildest jungles and deepest oceans from the comfort of your own home. (Photo via Netflix)

Tales by Light: This Australian docuseries follows several professional photographers as they travel around the world in the quest for the perfect image. The stories behind their pictures, and the lengths they go to to get them, will give you a new appreciation for the cultures and landscapes they're trying to capture. (Photo via Netflix)

FightWorld: In Netflix's FightWorld, actor Frank Grillo travels around the world to see how different people in different cultures train for combat sports, from Krav Maga in Israel to Muay Thai in Thailand. Grillo, whose credits include Captain America: Civil War and the TV series Kingdom, has plenty of on-screen fighting experience, so he's an engaging, knowledgeable, and curious host.

The training centers in FightWorld aren't exactly tourist destinations, though, so if you're looking for a show with scenic views and restaurant recommendations, look elsewhere. But if you want a unique perspective on a little-discussed aspect of local culture, this might be your jam. As Grillo says, "This show isn't just about fighting, it's about the people who fight." (Photo via Netflix)

Desiree O
Desirée O is a ‘Professional Bohemian’ who loves anything and everything related to the arts, entertainment, and pop culture. She ADORES being a ‘Newsy’ for Brit + Co, covering all of the latest tidbits of awesomeness that you want to read about. When she’s not writing, she’s either making messy art, going on long adventurous walks with her camera, or poking around over at bohemianizm (http://www.bohemianizm.com/). You can find out about Desirée O and her work at http://DesireeO.com/ or follow her on Twitter @DesireeO.
Netflix
Streaming
Netflix Streaming
More From Streaming