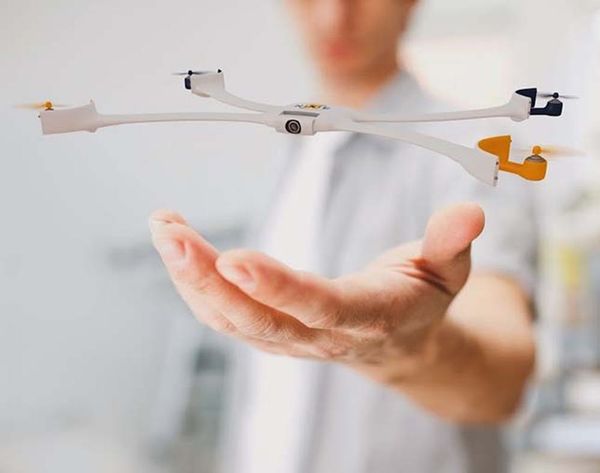 We thought we were asking a lot when we wished for more stylish wearables. But when that happened, we thought we’d start asking for more. Like, what about a wearable drone? Not just a wearable drone, but one that takes off with a flick of your wrist. And takes your selfies for you.

We can’t make this stuff up, people. Inventor Christoph Kohstall is the captain of a team competing to win Intel’s Make It Wearable challenge, and this is their pretty awesome submission — Nixie, a quadcopter that doubles as a wristband.

It’s not the first wearable camera, but it may be the first that can fly. It’s gesture controlled, so your wrist movement is what signals it to take off. Nixie can fly roughly 20 feet high. It senses where you are, and then takes an aerial photo of you. After that, it flies back toward you. You catch it in mid-air and snap it back onto your wrist until your next photo op.

Using this little gadget, you can get yourself and your surroundings in a photo without holding a tripod at arm’s length or gambling with asking a random passerby to snap the pic. We can see it being especially handy for climbers and runners, who can’t stop what they’re doing to capture the moment. It would also be great for solo travelers or for getting a group of friends in one shot.

Nixie is more portable than any drone we’ve seen and a lot less awkward than the selfie hat. The winner of the Make It Wearable challenge will be announced at the finale event on November 3, 2014. Whatever the results, we hope Nixie makes it to market!

Would a wearable drone change the way you take photos?

Stephanie Liebold
Stephanie Liebold is into storytelling, making things (better), and helping others share their message. She is Creative Director for Bold Avenue and writes about traveling, crafting, and making the most of the view where you are on her site, Travelcraft Journal.
intel
Tech
intel Photography Wearable Tech
More From Tech