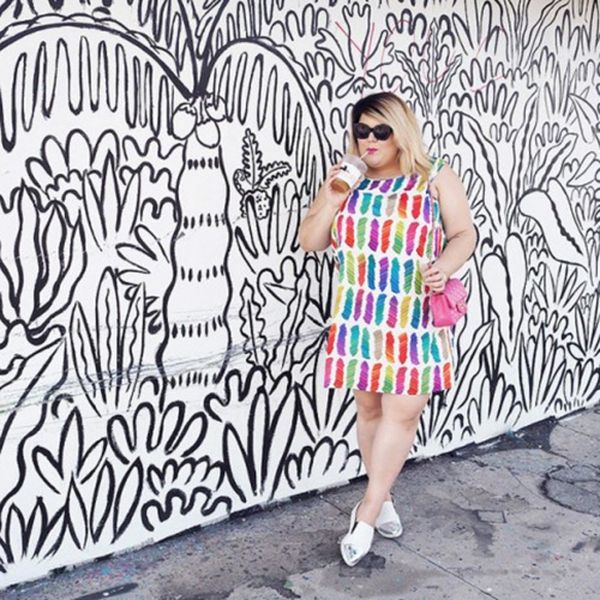 You heard the news about plus-size model Tess Holliday being signed by a major modeling agency last month, right? It’s about time fabulous ladies of all shapes and sizes got some recognition, especially now that so many favorite brands are releasing plus-sized clothing lines. We think this year is going to be the year that more curvy ladies over a size 12 become household names the way Kendall, Chrissy and Cara did in 2014. Check out these 13 rising plus-sized stars that are going to totally own the modeling world in 2015.

1. Gabi Gregg: Her blog GabiFresh is a major source of fashion inspiration, where she models killer style and beauty trends on the regular. She’s been keeping busy by designing and modeling SwimsuitsForAll’s 2015 swimwear line, and she was tapped to model for and advise on Target’s latest plus-size line, AVA & VIV. (Photo via SwimsuitsForAll)

2. Denise Bidot: Denise was the first plus-sized Latina model to strut her stuff in an otherwise non-plus-sized show at NYC Fashion Week. Not only did she show off her figure at Chromat’s show, she was also hand-picked to close Serena Williams’ show — where Anna Wintour was in the crowd. (Photo via JP Yim/Getty)

3. Marina Bulatkina: Come spring 2015, it’s going to be all eyes on Marina and Denise, who are the subjects of fashion photographer Victoria Janashvili’s new book, CURVES. Earlier this month, over 700 Kickstarters backed the book, which is raising body image awareness through inspiring, confident images of curvy girls like Marina. (Photo via Andrew H. Walker/Getty)

4. Nicolette Mason: Nicolette has already made her mark on the fashion world as a fashion editor and columnist at Marie Claire, a fashion collaborator with ModCloth and as one of our favorite style bloggers. Now, like Gabi, this rising star has teamed with Target on AVA & VIV. Have we mentioned how much we can’t wait for this line? (Photo via Nicolette Mason)

5. Nadia Aboulhosn: Are you as impressed as we are by how many of these hardworking models are doing double duty in the fashion world as bloggers? We definitely know Lena Dunham is impressed, as she fully admitted to being obsessed with both Nadia and her Instagram account. That’s some serious cred right there. (Photo via Mike Coppola/Getty)

7. Candice Huffine: Every year, Pirelli puts out a limited edition calendar that is so exclusive, it’s only given to VIP customers. But because it always features top supermodels and actresses, the world gets to see the photos online, and this year all the talk is about Candice. She’s the first plus-size model to ever grace Pirelli’s pages as the stunning (but NSFW) Miss April. (Photo via @candicehuffine)

8. Elly Mayday: Elly was diagnosed with stage 3 ovarian cancer early in her career. She stuck with modeling even as she received treatment, saying, “It hasn’t been the easiest thing but I am trying to make cancer beautiful.” You can see more of her beautiful spirit in the upcoming documentary, A Perfect 14. (Photo via Aparte Photography/Elly Mayday Official Fanpage)

9. Tara Lynn: You’ve probably spotted this pretty lady already at H&M, Torrid and Lucky Brand. What you might not know is that she’s also scoring high fashion gigs, like the covers of Elle Spain and Elle France (which called her “The Body”). Ooh la la. (Photo via @additionelle)

10. Jennie Runk: Remember that Glamour spread in 2009 that sparked all sorts of debate because Lizzie Miller dared to show what her stomach really looked like? Lizzie’s career as a positive body image icon took off, and now another model who was part of the same spread is beginning to get some major attention. Jennie was the model of choice for H&M’s swimwear in 2013 and has even written about size obsession. (Photos via H&M/Ford Models)

11. Georgina Burke: This Aussie star is on the rise thanks to being named the first face of Torrid last year and for her fearlessness when it comes to discussing what plus size really means. Style.com also recently ran a feature on her kickass workout routine. (Photo via John Sciulli/Getty)

12. Philomena Kwao: Not only does Philomena have the body to be the second face of Torrid, she has the brains to be an unstoppable supermodel. Before she was discovered at a modeling competition, she had earned a first-class degree in Economics and a masters in International Health Management. (Photo via John Sciulli/Getty)

13. Ashley Graham: Once upon a time Ashley starred in the now-famous Lane Bryant commercial that some TV networks refused to air. Flash forward to five years later, and she’s making Sports Illustrated history by becoming the first plus-sized model to grace the Swimsuit Edition’s pages. (Photo via Theo Wargo/Getty)

Which models are you most excited to see rock the runway and fashion spreads in 2015? Tell us about your faves in the comments!

(Featured image via Curves the Book)

Molly Griffin
Molly is a writer and editor from Boston who loves traveling, eating and occasionally being a little too candid. She lived in Dublin, Ireland for the last four years but recently moved to San Francisco to escape the rain. Now, she’s on the lookout for a good proper pub.
Plus Size
Fashion
Plus Size
More From Fashion