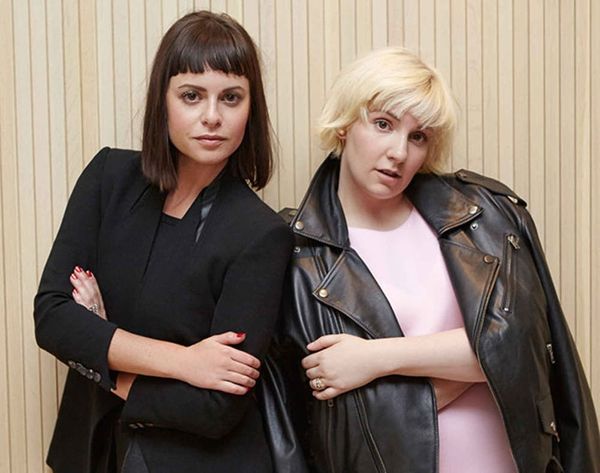 In what might be the most epic night of dress up ever recorded, Nasty Gal founder Sophia Amoruso teamed up with Lena Dunham to create a 15-style lookbook full of Nasty Gal power pieces to celebrate the kickoff of her Not That Kind of Girl book tour. The action went down at Amoruso’s monster LA pad, where the two tested fall trends, sipped bubbly and posed for Polaroids in what Dunham called “the most fun thing that’s ever happened to me.”

And even though we weren’t there to witness the #GirlBoss bonding, the two clearly had their fans in mind. On top of a fully shoppable lookbook, Amoruso and Dunham collaborated on an exclusive tote bag ($15) baring hot pink squiggles and the destined-to-be-a-hashtag title of her book on one side, and a “69” on the other, because, of course. Nasty Gal’s also sticking to its “look good, do good, feel good” motto by making a donation to Lena’s “book tour partners” on her behalf, a move that comes after Dunham was called out on the Internet for not paying said artists. She’s since reversed her position, taking to Twitter to say “As an artist raised by artists, no one believes more than I do that creators should be fairly compensated for their work.” Now that we’re all feeling and doing good, let’s get to that last part, shall we? Scroll through the snaps that show Dunham giving the Blue Steel a run for its money plus nine style tips you can take straight from the Girls creator.

1. Belt your trench. Seriously: This season the classic outerwear is now a wear-anywhere piece, thanks to the straight-from-the-style-blog hack. Any old belt will do — cinch at the waist and tuck the ends around the belt to get the posh look.

2. Clunky black booties are chic: The thicker the sole, the better. It doesn’t matter if you rock your flatforms, chunky heels and combats with or without socks — just rock ’em.

3. Crop tops + midis are a match made in heaven: If you didn’t already catch it from Anne, Mindy or Taylor, Lena’s driving the point home that a tossed-on tee and a girly fit and flare were meant for each other. Play matchmaker with your own mixed and matched two-some.

4. Break out the leopard print: When worn right, leopard print can make any outfit look instantly glam. Get maximum impact out of this trend and opt for a spotted faux fur jacket you can wear over a tee and jeans or a slinky cocktail dress.

5. Toss on a #throwback tee: Cowabunga! Dig up those ‘90s tees (or plan a thrifting outing) and wear ’em like ya just don’t care.

6. Get hip with floral print: Think big, bold all-over floral prints to keep the look modern. Grab both a mini and a maxi in this any-season pattern so you can wear the trend at any occasion.

7. No get up is complete with a quirky bag: Lena knows how to make a statement with a carryall, and we’re just as smitten with the kooky accessory. Add a playful shape to your purse collection just because (and nab an offbeat phone case to match!)

8. Go mad for moto: Nothing screams badass like a moto jacket. Plus, its cropped cut flatters any figure. Drape it over your shoulders for the ultimate #GirlBoss look.

9. Play dress up with a badass bestie: Half the fun of dressing up is having a PIC to high five in between outfits. Sophia’s obvs the best of the besties. We hope this is just the beginning of the pairs satirical shenanigans.

What straight-from-Lena style tips are you planning on stealing (or maybe your swooning over Sophia’s blunt cut? Yeah, us too!). Tell us which trends you’re planning on trying in the comments below.