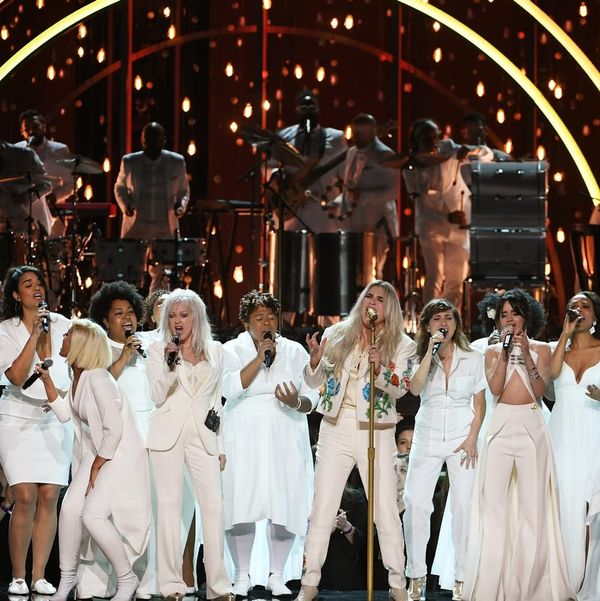 When Kesha performed at the Grammys at the end of January, everyone was talking about her emotional and powerful performance of the song, “Praying.” Her first performance since her legal battle with Sony Records holds a lot more weight at a time when the #MeToo movement and Time’s Up initiative are addressing sexual harassment in the movie and music industries, and beyond. But she didn’t perform the song solo. The artist had the help of Cyndi Lauper, Bebe Rexha, Camila Cabello, Andra Day, Julia Michaels, and members of the Resistance Revival Chorus. And that last addition is no coincidence.

The Resistance Revival Chorus is a collective of 60 women who sing protest songs in an effort to uplift women and strengthen the women’s movement. It’s the creation of some very talented and strong-minded women who also happened to have a hand in organizing the Women’s March on Washington. Paola Mendoza, Sarah Sophie Flicker, and Ginny Suss are activists and artists who, along with fellow co-founders Nelini Stamp, Shruti Ganguly, Alyssa Klein, and Jenna Lauter, founded the chorus on the belief that art and activism can intersect to make the movement stronger.

When a protest turned into marching and singing, it prompted Flicker to have a conversation with Stamp about the importance of music in any movement. Her past work with a political theatre group called The Citizens Band also sparked some of the inspiration for the Chorus. She explains that most of her work has focused on fusing art, culture and politics “with the understanding that oftentimes, art has the power to shape hearts and minds in the way policy doesn’t.”

Suss’s career in the music industry and Mendoza’s role as Artistic Director for the March also made them ideal contributors to the birth of the chorus. Suss specifically reached out to artists within her network with low expectations, but the response was actually quite overwhelming.

The Resistance Revival Chorus made their debut in Times Square, dressed in white, singing “Rich Man’s House” in the summer of 2017. Mendoza, Suss, and Flicker are members of the Chorus, as well as professional artists Meah Pace and Abena Koomson-Davis, their musical director. The women rehearse on a monthly basis, but they don’t necessarily always perform together. Because they believe in paying their singers, they can have as few as 15 or as many as 35 women singing at once.

Performances like the Grammys are certainly special occasions, but the Chorus also prioritizes their Resistance Revival Nights. These events are held once a month at different venues throughout New York City. In addition to their performance, they invite five to seven solo acts under the requirement that they sing a resistance song, whether it’s an original or a cover. Each show may have a different theme or even a different charity they choose to donate to.

“Our main mission is that joy is an act of resistance, so we make our shows as joyful as possible. To invigorate us, to inspire us, to make sure we’re not being disempowered,” describes Mendoza.

Every Resistance Revival Night also includes announcing the “Wins of the Month.” By announcing what the resistance has won over the past month, they’re reinforcing the message that joy is an act of resistance and that self-care is important. Mendoza recalls that two women drove all the way from DC to New York to attend their show in January, which reminds them that there is a want and a need for it.

“In such a difficult time, we’re afraid and we’re unsure of what tomorrow will hold. We can get stuck in a dark place, but it’s important to celebrate our wins, small and big, to keep us fighting for the next month,” emphasizes Mendoza.

Suss reiterates how everything they do is rooted in the idea of community, whether it be by inviting different artists (including men allies) or choosing which venue to host the event.

“Part of the reason we have this event at multiple places across the city is to expand who we’re reaching and who we’re talking to. Certain venues are known for getting a certain crowd, being in a certain neighborhood. We want to be accessible to everyone and have a democratic crowd,” explains Suss.

While the Resistance Revival Chorus is based in New York City, you’ll find a “Tool Kit” on Medium where they encourage other choruses to be created around the country. Mendoza explains that they wanted to replicate what happened with the Women’s March on Washington, in which cities and states created smaller versions of the march.

“We wanted to empower people to take the concept and put that into action in their own communities.”

Currently, they’re aware that there are choruses in Boston, DC, and Buffalo, but they don’t control them. As long as they share the same values, Mendoza believes it should spring up the way a people’s movement does.

The Resistance Revival Chorus recently released their first single, a cover of Leslie Gore’s feminist anthem, “You Don’t Own Me,” in an effort to raise awareness around #MeToo, #TimesUp, and women who have been victims of sexual violence. As for future plans, they simply want to keep growing their community of women in the resistance. For them, that means focusing on live performances — including Carnegie Hall on March 3, thinking about an album, and a possible tour.

Whatever their next move is, they will always stand by the words of Harry Belafonte: “When the movement is strong, the music is strong.”

What songs would you like to see the Resistance Revival Chorus sing? Tell us @BritandCo!

Natalie Zisa
Natalie Zisa is a freelance writer based in New York City. When she's not writing about inspiring women, she's pursuing dance professionally. Otherwise, you can find her searching for free fitness classes, lip syncing to her favorite Italian music, and enjoying her mom's homemade pizza. If she could interview one person, it would be Chelsea Handler.
Feminism
Empowerment
Feminism Grammy Awards Ladies First
More From Empowerment