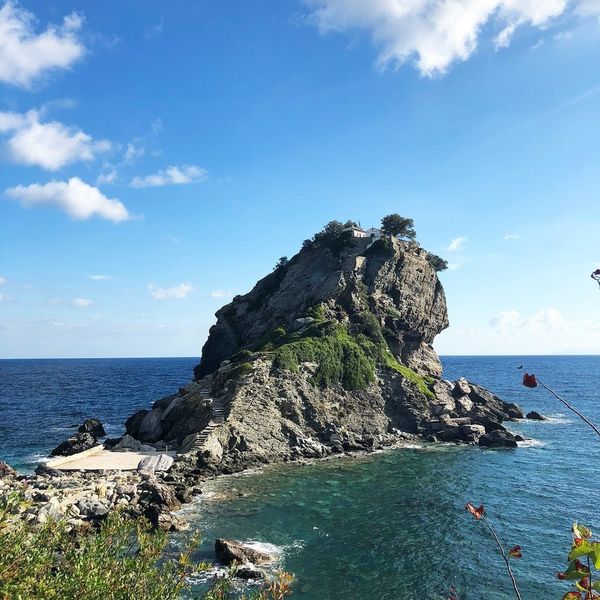 Even if you’ve never been to the Greek Islands, you probably still have a good idea why they’re high on everyone’s travel bucket list — pristine beaches with turquoise waters, cliffside whitewashed buildings with bright blue roofs, narrow cobblestone streets perfect for a day of wandering, and laid-back vibes. Essentially, everything you need for a guaranteed dreamy escape.

Most people automatically default to romantic Santorini or partygoing Mykonos when planning a Greek vacation, but there are actually thousands of islands (not all are inhabited) in the Aegean and Ionian seas. One of the hidden gems in the western Aegean Sea, off the east coast of mainland Greece, is Skopelos. The greenest of the Greek islands, Skopelos is lush with trees and may look familiar because it stood in as the fictional island of Kalokairi in the film Mamma Mia. Though most of the film’s sequel Mamma Mia: Here We Go Again (now available on all home entertainment formats), was filmed in Croatia, Skopelos’ charm and warmth are no silver-screen creations. On Skopelos, you’ll get all the wondrous aspects of a relaxing beach destination without the annoying throngs of tourists.

Half the fun of Skopelos is getting there. From the US, you’re most likely to connect through Athens before taking a short flight to the island of Skiathos, then hop a ferry or a water taxi to Skopelos. (Pro tip: There is no airport on Skopelos, so pack Dramamine if you tend to get seasick.) For the more adventurous (and less budget-sensitive), you can also fly from Athens directly to Skopelos via helicopter. But the long journey to this tranquil island is worth it once you get there — here are a just a few reasons why. (Photo via Lesley Chen)

Staying at one of the beachfront Adrina Hotels feels like you have both a private villa and a private beach. Adrina Beach Hotel‘s ivy-covered buildings house rooms that are straight out of a Greek dream — bright, airy spaces with white wooden floors and blue-shuttered balconies that look out to the Aegean Sea. There’s no better way to fall asleep than with your windows open, listening to the waves crashing on the beach just steps below. Next door, Adrina Resort and Spa boasts a more modern design, and a few of the luxe villas even have their own private pools. Each Adrina hotel has a large pool, tasty dining options on-site, and private beaches with chairs, umbrellas, and water activities available (kayaking, paddleboarding). As mentioned, the resort also boasts a spa, so you can book a relaxing massage before or after a day lounging in the sun. Both hotels are run by the same incredibly friendly, hospitable staff — a stay here will make you feel as welcome as family. (Photo via Adrina Beach Hotel)

To get the complete Mamma Mia experience, there’s the family-run Skopelos Village Hotel in town, where the cast and crew stayed during the filming of the first movie. (Photos of Meryl Streep and Pierce Brosnan are still hanging on the wall.) The hotel also has a bar and restaurant, pool, and massage room.

It goes without saying that the beaches on Skopelos are the main attraction. The calm, quaint Adrina beaches sit in front of the Adrina hotels in protected coves. Milia Beach, one of the most popular, is the longest beach on the island and is split in two by natural rock formations. It has a view of the tiny island of Dasia and makes a great spot for snorkeling. (Photo via Lesley Chen)

A must-see is picturesque Kastani Beach, a key filming location in Mamma Mia (the cast members of the sequel also paid a visit to Kastani when they were in town doing publicity for its home entertainment release). Sunsets at Kastani Beach are breathtaking, and there’s a small cafe serving snacks and beverages if you need to refuel. Other Mamma Mia filming locations/beach highlights include Agnontas Beach — particularly the harbor, marked by three pine trees — and Glisteri, a pebbled beach that leads into clear waters. If you have an afternoon free, book a private boat or a boat tour to sail around the island. Most of Skopelos is covered in lush pine trees: When looking at the vibrant greenery set against white beaches and unbelievably blue skies and water, you’ll blink twice to make sure your eyes aren’t deceiving you (seriously, it looks like everything has been run through a saturation filter).

There are two main towns on the island: Skolepos Town on the east coast and Glossa on the northwest, both built into hills. The best way to explore the towns is on foot, with no set destination in mind. Wind your way up the narrow streets past white houses with flower-lined balconies, small churches, and inviting cafes, and catch your breath (or lose it) while taking in the views.

The island is decorated with numerous churches and monasteries. Most notable is the Church of Agios Ioannis Kastri (AKA the Mamma Mia church), perched atop a rocky cliff. The exterior was featured in both Mamma Mia movies, and if you want to get a closer look, the hike to the top is about 100 steps straight up (though you’ll likely forget about your burning legs when you take in the views and cool coastal breeze). In Skopelos Town, you’ll also find Panagitsa tou Pyrgou, a church built into the cliffside. It’s also a small hike to get to, but you’ll be rewarded with views at the top.

When in Greece, head to a taverna (don’t mind the cats napping in the sunbeams near your feet) to enjoy something local — think a cheese pie (deep fried filo dough filled with cheese), souvlaki, Greek salad, seafood — washed down with a beer or house wine. The 68-year-old establishment Agnanti is a highlight of Glossa, and numerous taverns line the waterfront in Skopelos Town. Local products include olive oil, honey, and plums, so make sure to get a taste of any and all of the above. For a lit night, head to La Costa, a kitschy bar where they will set the wall behind the bar on fire for you. (Photo via Getty)

Tag us in your next dreamy vacation on Instagram @BritandCo.