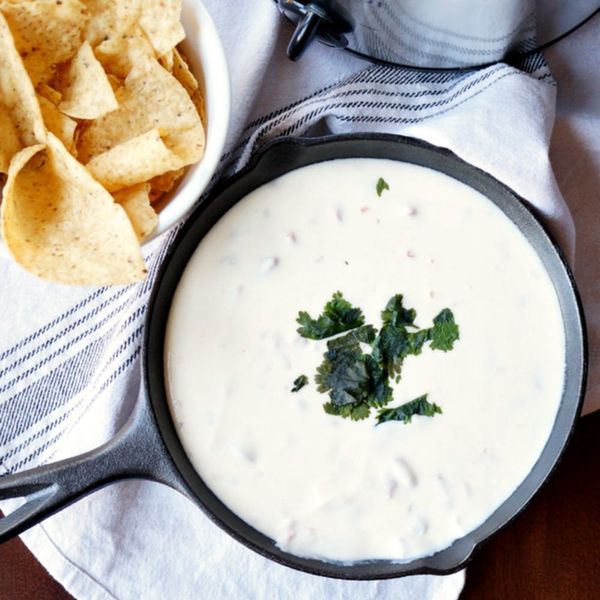 There's something about a table full of finger foods, tachos, and dips at a game-day party that makes everyone so happy. In fact, the hardest thing about the smorgasbord is pacing yourself, and of course, choosing what to serve. To help you get your head in the snacking game, we've compiled 17 slow-cooker recipes so that you can keep your eye on the ball — not the kitchen.
Chili’s Copycat Queso: This creamy queso is spiced to the nines and melted to a flawless consistency. It's loaded with paprika, chili powder, and cayenne pepper, but the flavors never seem too overwhelming. Don’t be surprised if folks ask you if you actually got this to-go at Chili’s. (via Crème De La Crumb)
Pork Carnitas: You’ll be tempted to add this pork’s neutral flavor profile into any and every dish. Of course, you can also just eat it by itself. Those crispy bits that are mixed in with succulent pork are hard to resist. (via Recipe Tin Eats)
Shrimp and Crab Bisque: Since the Patriots have a chance for the title, you probably want to include some good old-fashioned New England clam chowder in your spread. But don't limit yourself to a classic chowder when there are options like this bisque. Loaded with East Coast seafood and done in the appropriate style, this soup is a delicious (and incredibly easy) way to show your support. (via Yes to Yolks)
Jalapeño Popper Chicken Taquitos: All hail the slow cooker, the master of the cheesy inside and crispy outside. With a sprinkle of jalapeño spice and softly shredded chicken, this recipe makes the ultimate game-day appetizer. (via Crème De La Crumb)
Slow Cooker Sweet Spicy Sausage: Who doesn’t love an appetizer that they can poke with a toothpick to enjoy bite-sized portions? This recipe in particular is perfect for those who can’t decide between sweet, spicy, and smokey; it rolls them all into one for an extremely satisfying mouthful of flavor. (via A Night Owl)
Ranch Oyster Crackers: Whether you’re using them in all the soups you’ve prepared or just grabbing them by the handful to snack on, these oyster crackers are sure to be the MVP at your Super Bowl party. (via Damn Delicious)
Barbecue Ribs: You no longer have to hover over a barbecue patiently waiting for moist, fall-off-the-bone ribs to cook as you miss out on the game. But everyone will still think you spent hours slaving away. (via The Recipe Critic)
Pepperoni Pizza Dip: Game days need dip and pizza. It’s kind of a rule. If you’re rushing to get the party started, why not combine the two into one? The result is a pepperoni pizza dip that is as tasty as it is fun to eat. (via The Cookie Rookie)
Slow Cooker Ranch Chicken Tacos: When you roll up that decadent chicken in a warm flour tortilla and top it with red-onion-cabbage slaw, cilantro, and even more creamy ranch dressing, you get this irresistible, mouthwatering dish. It's a serious contender for your favorite game-day fare. (via Crème De La Crumb)
5-Ingredient White Queso: It isn't a party without queso. Add in some white queso for a standout twist on a classic. This restaurant-quality recipe has tons of flavor, and you might wonder why you never discovered how easy it was to throw together in your slow cooker. (via The Baking Fairy)
Slow Cooker Shredded Buffalo Chicken: Buffalo chicken is nonnegotiable after kickoff. While most people think of buffalo chicken in its wing form, the best way to eat it might be when it’s shredded. There’s no frying required, it’s ready to be used in imaginative ways, and it’s inexpensive. Definitely a winner. (via Host The Toast)
White Chicken Chili: You’ve probably seen a standard chili show up to the party, but this is the year that white chili has made the draft pick. You can even pit the two against each other and see which one comes out on top based on popular opinion. (via Well Plated)
Texas Trash Beef and Bean Dip: Nothing to trash about this hearty, creamy appetizer that truly pulls out all the stops. This dip adds beef for a little extra nom nom. (via The Magical Slow Cooker)
Ranch Slow Cooker Chex Mix: You have to have some finger food available that doesn’t make a sticky mess and can be thrown up in the air in moments of celebration. For that, you need homemade Chex mix. (via Oh, Sweet Basil)
Barbecue Bacon Chicken Dip: Layers of barbecue, bacon, and chicken are held together in a cheesy net of deliciousness. Warning: There will be double-dipping. (via The Magical Slow Cooker)
Pulled Pork Sliders With Garlic Aioli: Sweet and spicy pork is slathered with garlic aioli and sandwiched between two pillowy buns for a portable sandwich. Plus, the longer this recipe hangs out in the slow cooker, the more melt-in-your-mouth irresistible it becomes. (via Stuck on Sweet)
Garlic Parmesan Chicken Wings: If you need a dish to bask in the spotlight, this is it. Chicken wings are coated in garlic and Parmesan and cooked slowly until the meat is covered in a crispy casing. Make your favorite dipping sauce for accompaniment and watch them disappear. (via Say Grace)