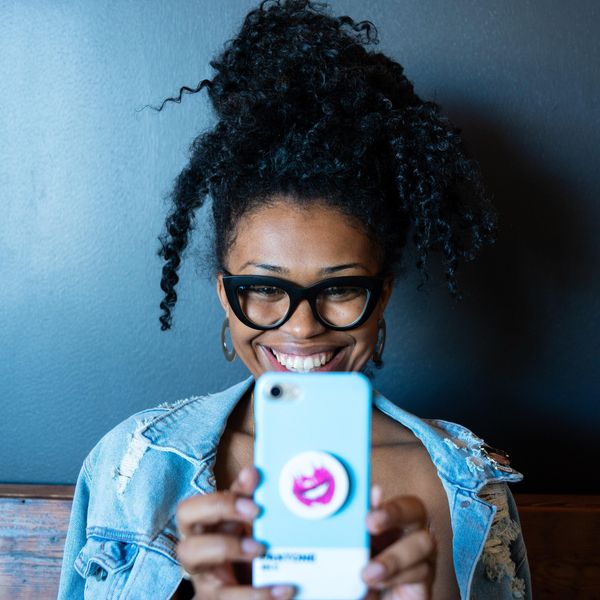 Smartphones often get a bad rap when it comes to mental health. It's partly because they're the gateway to social media, which leads to the potential pitfalls of comparing your real life to other people's perfectly curated feeds. And it's partly because some studies have found that they can be addictive, although the research on that is a work in progress. But totally dismissing smartphones deprives us of a powerful tool that can be used to make us feel calmer, more productive, and less stressed. Check out these five ways you can use your phone to promote good mental health.

1. Take a photo a day. Instagram food pics, anyone? A study published in the journal Health spent two months following eight people who were already engaged in taking and posting a photo a day to a sharing site to see how the practice affected their mental health. The participants reported a range of benefits; for example, the project prompted them to be more mindful and to take time out to do something for themselves, even on a busy day. Knowing that they had to find something to photograph gave them a reason to leave the house and a sense of purpose and structure.

In addition, the online community who commented on and liked the photos gave some of them a sense of belonging, although others reported that the obligation to respond to these followers made them feel overwhelmed. Those who had been going through a personal struggle said that having a record of photos was a visual reminder that they'd made it through. The authors noted that since their subjects were already involved in their own “photo a day" project, the people most likely to get these benefits are those who already have an interest in taking and sharing photos. So if that sounds like you, grab your phone, open Insta, and give it a go.

2. Use a mental health app. Easily accessible and often free, mental health apps are another layer of support if you're having a difficult day and can't make it to an extra support group session. One study looked at reviews of various apps and found that they can improve the symptoms of conditions such as depression and anxiety.

Different apps serve different mental health needs. If you need information, or a reminder to take medication, you can try text message services, which means you can receive information anonymously. Other apps, like What's Up (free on Android and iOS) and MoodTools (free on Android and iOS) are designed specifically for people with mild to moderate depression and are more interactive, combining activities based on cognitive behavioral therapy (CBT) and other therapeutic practices. These include thought trackers so you can monitor your positive and negative moods, diaries secure from prying eyes, breathing techniques, distraction games, and information on symptoms and treatments. Another app that could help with anxiety is iBreathe (free on iOS) which guides you through deep breathing exercises.

A study in the Journal of Medical Internet Research noted that some users reported that they used these apps instead of paying for a therapist. However, many of the app websites note that they are designed as supplements, rather than replacements, for seeing a mental health professional.

3. Make a playlist. There's a reason listening to your favorite song is an instant mood boost. Research has shown that music can stop the production of the stress hormone cortisol and can help reduce the emotional distress of physical pain. An analysis of 25 studies that was published in the World Journal of Psychiatry found that music therapy can be an effective and non-invasive treatment for mood disorders and depression in patients with neurological conditions. And it's not just classical music: The genre of music most likely to get you into an easygoing and creative frame of mind is… any genre you like. While scientists used to think that listening to Mozart specifically had a positive influence on the brain, further research has since shown that the kind of music is less important than your enjoyment of it. So own your Swiftie sessions; it's good for your mental health.

4. Watch cat videos. According to what may be the greatest study of all time, those adorable videos of cats you can't get enough of really do count as a form of self-care. Published in the journal Elsevier, the study looked at why people watch cat videos online and the potential pros and cons. The researchers found, to no one's surprise, that people watch cat videos as a method of “mood management," and that after watching cats on the internet, viewers reported lower levels of negative emotions and more positive emotions, and were re-energized. However, the researchers pointed out that your enjoyment of cat videos may be slightly lower if you're using them to procrastinate from something important, since that might tinge your viewing experience with guilt — so save them for cocktail hour.

5. Use a guided meditation app. Always wanted to try meditation but don't know where to start? Amanda Ruiz, MS, LPC, Pennsylvania-based counselor and founder of The Counseling Collective, recommends apps to get you in the habit. “The first few times you attempt to meditate can be difficult; it might be hard to notice your senses, or to stay focused on one positive thought. Apps like Calm and Headspace offer guided meditations for those who aren't sure how to get started with meditating." Both Calm (free on Android and iOS, then $12.99/month) and Headspace (free on Android and iOS, then $12.99/month) offer seven-day free trials, with the option to subscribe if you like the app and want access to all the features. Each has meditations on specific topics like sleep, anxiety, and self-esteem, plus mindfulness meditations, breathing exercises, and ways to track your progress. If you struggle to stop your mind from swirling on your own, using these apps can help you build up the practice of meditating into a daily habit, Ruiz explains. Same old smartphone, less stressed you.

How do you use your smartphone to unwind? Tell us about it @BritandCo.

From Your Site Articles
Natasha Lavender
Natasha Lavender is a Londoner living in Chicago, and is fluent in British and American. She writes about pop culture, health, lifestyle, feminism, fashion, and interviews with interesting people, and has previously worked for Good Housekeeping magazine, Buzzfeed, and Hello Giggles. She loves podcasts, running, reading, dogs and cats equally, and peanut butter anything.
#CreateGood 2018
Health
#CreateGood 2018 Apps Mental Health Self Care Womens Health health technology
More From Health