How to Stay Sober During Holiday Party Season 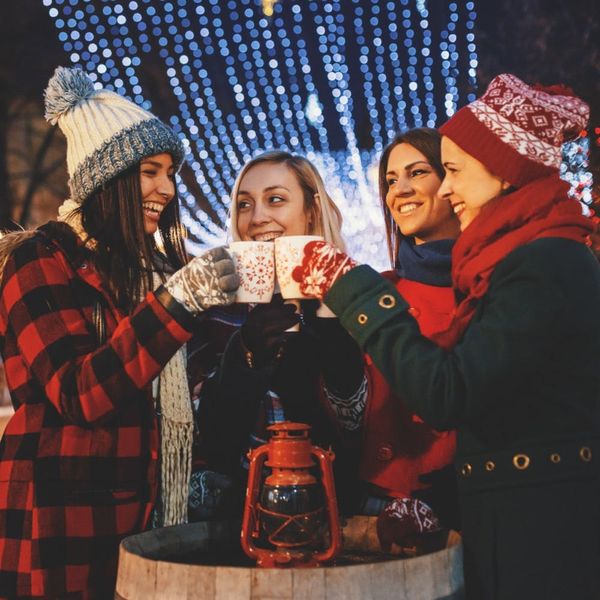 Ask many hosts the ingredients of a great holiday party, and you’ll likely find good friends, good food, and a good supply of alcohol are the essentials on their lists. However, a surprisingly large number of people say they can do without that last item: The 2015 National Survey on Drug Use and Health found that seven in 10 people aged 18 and older had drunk alcohol in the last year, and just over half had done so within the last month — leaving a large percentage of sober people.

There are a lot of reasons why someone might choose not to drink on a particular night (or ever). It might be that you’re concerned about the potential health risks associated with alcohol, you don’t like the sensation of being drunk or feeling out of control, or you’ve had an unhealthy relationship with or addiction to alcohol. Whatever your reason, no one should shame you for making a personal decision about what you put in your body — but unfortunately, it can still feel awkward to be the person not joining in with others’ drinking, and this tension is especially prevalent in the holiday season. A study published by Laguna Treatment Hospital found that Instagram posts using hashtags related to addiction recovery and sobriety peaked in October, November, and December, when attending more parties means more pressure to drink. Here are six expert tips on staying sober (and helping friends stay sober) through this booziest time of the year.

1. Remember that non-drinkers don’t owe anyone an explanation. A decision not to drink really isn’t anyone else’s business. “Not everyone is comfortable discussing their sobriety: Don’t ask anyone why they aren’t drinking or pressure them,” emphasizes Dr. Paul Little, Medical Director for Laguna Treatment Hospital and San Diego Addiction Treatment Center. “Enjoy all of your guests, whether they’re drinking or not!” If you’re a non-drinker feeling self-conscious about how to respond if someone offers you alcohol, it can help to have a scripted response ready. “The best strategy is to have something prepared for when people ask you to drink,” agrees Dr. Deni Carise, PhD, Chief Scientific Officer for Recovery Centers of America. “You don’t need an elaborate story: All you have to say is, ‘No, thank you,’ or ‘Not right now.’” If you feel pressured to come up with something more substantial, licensed clinical psychologist Dr. Kevin Gilliland, Executive Director of outpatient treatment group Innovation360, suggests pointing to health reasons: “You don’t need to clarify what health reasons, but you can talk about your heart or even say something about medications you’re taking that you’re not supposed to be drinking on. You can also plan a workout class the next morning or say you don’t feel well.”

2. Reassure yourself that most people won’t care as much as you think they will. When you first stop drinking, it can feel like everyone at the party is judging you, but often the awkwardness is in your head. “People don’t care about the question [of why you’re not drinking] nearly as much as you think,” reassures Dr. Gilliland. “When asked, give a short answer and change the subject. That awkward discussion lasts less than a minute.” Of course, there sometimes seems to be that one person who can’t let up — which says more about them than it does about you. Laura Taylor, who founded her own line of non-alcoholic drinks called Mingle Mocktails after she chose to stop drinking, says, “I’ve learned that most people just ask out of light curiosity and are satisfied with simple responses. Those who continue to probe with more questions are often asking because they’re considering their own drinking issues.” She advises that you keep your answers short and sweet: “I’ve learned the best response is to keep it brief: There are more interesting topics to discuss at parties than my drinking habits!”

3. BYO(N/A)B. Depending on the party, it can be a good idea to bring your own non-alcoholic alternative to the boozy drinks on offer. Dr. Carise assures us, “It’s okay to bring a bottle of something non-alcoholic: Ginger ale and sparkling fruit ciders are a nice alternative to champagne, and they will ensure that sobriety doesn’t stop you from participating in a holiday toast.” Being seen holding a cup of something also stops people asking if they can get you a drink. “When I first stopped drinking, it was very hard for me to be with people I used to drink with,” Taylor admits, “so I would bring my own beverages. That way I had something in my hand, which helped me avoid unwanted attention.” Serve yourself soda or even water, and no one will be any the wiser.

4. Invite backup. If you don’t want to be the only sober person surrounded by drinkers, consider bringing a friend to keep you company and to support you if you’re in recovery (assuming your host is welcoming plus-ones, of course). “Life can get a little easier and less anxious when we have someone with us that knows our struggles,” encourages Dr. Gilliland. That said, if you’re specifically battling addiction, it’s ultimately still down to you to make the choice to stay sober. “You will still need to think ahead about how to handle being around alcohol and people consuming alcohol,” he cautions. Even if you don’t physically bring someone with you, the magic of technology means you can still have them on hand. Before you go, Dr. Carise recommends, “Talk to the people in your support network to develop a plan to help you get through difficult moments. This could include excusing yourself to get some fresh air or to call someone close to you to work through whatever may be going on.”

5. Have a way out. As the night goes on and the guests who are drinking go from cheerfully tipsy to downright drunk, being the last sober person standing gets less appealing — and the temptation to drink increases. It’s a good idea to plan out how you’re going to get home in advance so you can end your night before that point. That can be driving yourself — one of the perks to being sober! — or using a rideshare app, or planning a public transit route, or calling a friend. Knowing exactly how you’re going to get home can be comforting if you’re worried about how people will react to your decision not to drink (especially if they’re a group that you mainly know through alcohol-fueled events) or if you’re in recovery and feeling tempted. Don’t feel pressured to stay longer than you’re prepared to: People who are drunk probably won’t remember what time you left anyway!

6. Be a good host to sober friends and family. Brianne McGuire, a writer and founder of website GRAPHICPAINT, who has been sober for over six years, says, “Make non-drinking guests feel included by providing a selection of interesting alcohol-free beverages: Warm cider, fizzy juice mixes, sparkling lemonades, and artisanal sodas are all great.” The food you serve can also help, she adds. “Cookies and cakes are helpful because they trick the body, satiating both mental and physical cravings for booze.” If you’re not sure what to buy, taking the time to reach out to a teetotal guest in advance to see if they have any preferences is a really considerate touch, says Taylor. Dr. Gilliland recommends moving the bar to shift the focus from booze: “Put it in a smaller room out of the main area.” Taylor adds that your bar can also be a way to engage non-drinkers: “One party I went to let people help themselves to a mocktail or a cocktail, which was fantastic.”

Ultimately, what non-drinkers want is just to be allowed to have fun without drawing attention to what is or isn’t in their cups. All you really need to have fun is the kind of understanding friends who make any evening into a party.

How are parties different when you don’t drink? Share sobriety stories with us @BritandCo.