Taylor Swift Might Be Appearing in the Next X-Men Movie 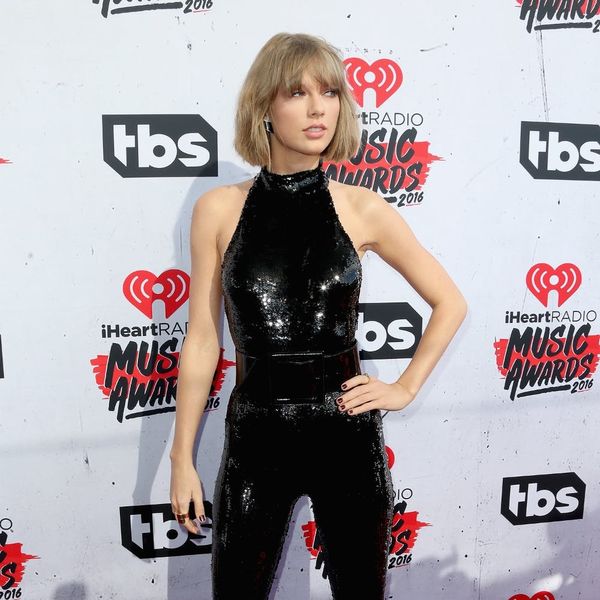 Mutant lovers and Taylor Swift fans are ALL gonna want to get in on this news. The X-Men: Apocalypse movie is starting to spark serious rumors, and the best yet has just hit the Internet. It appears as if Dazzler, the original singing mutant character who was capable of taking down bad guys with a mighty blast of light, might be making a cameo in Apocalypse. As cool as that news is on its own, the fact that one of our fave IRL singers might be stepping into the role is super exciting. Yep, we’re talking about Calvin Harris-jacket wearing Taylor Swift.

Sophie Turner, who plays a young Jean Grey, posted the insider peek at the film that’s slated to drop May 27, 2016 to her Instagram account with the caption, “#FlashbackFriday to that time Cyclops and I went shopping at the mall and found our favorite singer’s album (pre 1989, of course).” Um, pre 1989? Could that be a blatant hint at the identity of the person who will be playing Dazzler? We’re keeping our fingers crossed that it is.

And if you think we’re reaching here, it might also be key to note that, according to Entertainment Weekly, not only does Apocalypse producer and writer Simon Kinberg consider himself a Swift superfan, but the entire X-Men cast went together to Taylor Swift’s 1989 Tour last year.

Honestly, though, just look at how fierce Tay is on stage and try to tell us she couldn’t make an amazing mutant superhero. You can’t! This all could be a big (brutally teasing) coincidence, but until we’re proven wrong, we’ll be picturing Taylor Swift as the magnificent musical mutant.

Desiree O
Desirée O is a ‘Professional Bohemian’ who loves anything and everything related to the arts, entertainment, and pop culture. She ADORES being a ‘Newsy’ for Brit + Co, covering all of the latest tidbits of awesomeness that you want to read about. When she’s not writing, she’s either making messy art, going on long adventurous walks with her camera, or poking around over at bohemianizm (http://www.bohemianizm.com/). You can find out about Desirée O and her work at http://DesireeO.com/ or follow her on Twitter @DesireeO.
Music
Music
Music Taylor Swift
More From Music