How Distracted Parenting Is Negatively Affecting Your Child 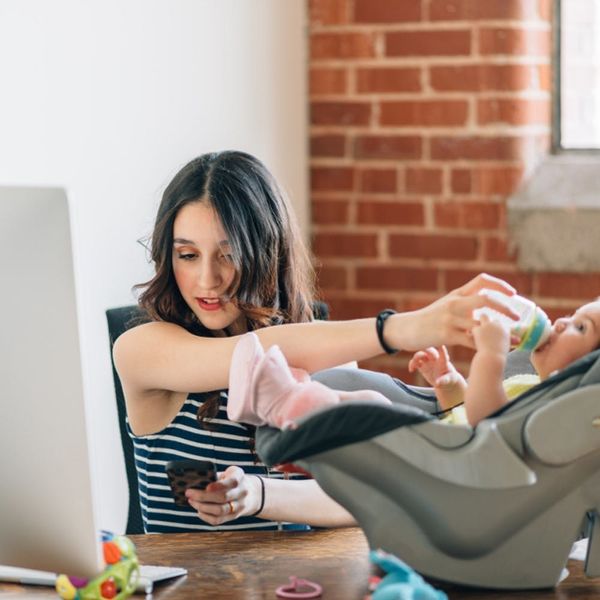 Ahh, the playground. It’s a magical little wonderland for your kiddo. But for some parents, it’s a place to text friends, catch up on work emails, and read all the latest celeb gossip. With the world at our fingertips, it’s easy to see how smartphones, laptops, and tablets have turned would-be attentive parents into totally distracted ones. Sure, a random email or quick reply to a group text about the preschool’s PTA fundraiser won’t ruin your child’s psyche forever. But serial technology distraction can have an effect. Before clicking and skimming while your kid is at play, check out what research has to say!

1. Your kids may start acting out just to get attention. Mom’s on her phone — again. The kiddo is twirling, whirling, and trying to do backflips: Obviously, they want Mom’s eyes on them. When 35 caregivers were interviewed by University of Michigan researchers on how their tech-time use impacts their children, a common theme was attention-seeking behaviors. Kids know when they’re being watched and when they aren’t. When a parent is glued to their phone, the child may act out, act up, or do whatever they can to pull that attention away from the device and onto them.

2. You may respond more harshly to them. Your child expects you to pay attention as they noisily finger paint by your side. But your boss just sent the mother of all emails, and you have to read it — right now. You’re 100 percent totally absorbed in the message when your preschooler “accidentally” spills their paints all over the kitchen table. So you calmly put your phone down and sweetly smile as you gently wipe up the mess… um, not. It’s more likely that you shake yourself out of a technology-induced stupor and kind of freak out. Hey, you’re not alone. In a study of 55 caregivers, those who were highly absorbed in their tech use often responded harshly when their children misbehaved. Putting yourself on a tech diet when your child needs your attention can solve this problem — for good!

3. You’re interacting with them less. Eyes on the screen equals isolation. At least, some sort of mental and communication isolation. When parents focus everything on reading those all-important emails, texts, and articles, talking to the kids gets left behind. Technology distraction makes for weak communication. This includes both verbal and nonverbal interactions. That means you’re less likely to talk to, look at, or hug your kiddo when you’re entirely absorbed in whatever is on your smartphone.

4. They’re learning by watching you. Psst, someone’s watching you. That’s right, you’ve got a voyeur. But not in a creepy way — it’s your child, and they’re tracking every move you make. When you stop socializing and start screen time, your kiddo takes note. They see you staring at the screen instead of talking to the other parents at the park, and they may start wondering if that’s the new normal. Well, it’s not, and you know that. Now you just have to show your child what true socialization means. That is, without a screen.

5. Your kids may engage in riskier behavior. The iPhone debuted in 2007. That year marked a rise in unintentional injuries of children under age five (after a decade of falling numbers). Coincidence? Possibly. Or maybe the new tiny computers that fit in the palm of parents’ hands paved the way to a new parenting distraction. Researchers at North Shore-LIJ Cohen Children’s Medical Center studied smartphone distractions on the playground. They found that when parents were distracted, children were more likely to engage in dangerous behaviors. These included throwing sand, jumping off of swings, and the dreaded walking up the slide.

Do you separate your own tech time from family time? Tweet us your answer @BritandCo!

Erica Loop
Erica Loop is a freelance writer living in Pittsburgh. When she's not busy creating kids' activities for her blog Mini Monets and Mommies, you can find her trying to hang out with her teenage son, being chased by her two Olde Boston Bulldogs or teaching a children's karate class (she's a third degree black belt!).
Parenting
More From Parenting