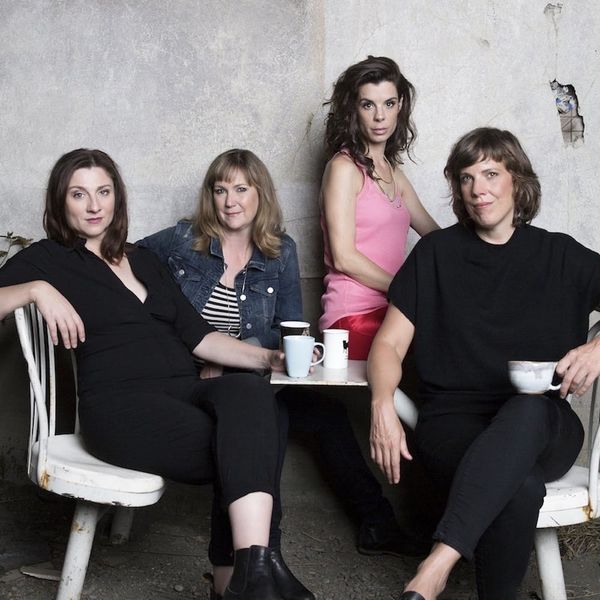 Ah, Canada: land of the best vacays, the most creative population, and Prime Minister Justin Trudeau (and all his glorious photo ops). There’s a lot to love about America’s neighbors to the north, not least of which is one of the best comedy shows going right now (at a time when we need it more than ever, to boot): the Baroness von Sketch Show.

Baroness von Sketch Show was created by, and stars, Carolyn Taylor, Meredith MacNeill, Aurora Browne, and Jennifer Whalen, four comedy veterans who had an immediate cult hit when the show debuted on the CBC in Canada last year. This summer, the fast-moving, quick-witted single-camera sketch comedy show has arrived in the US on IFC, and it’s bound to resonate with a whole new audience.

The sketch comedy show intelligently skewers some of the more narcissistic and self-serious parts of contemporary culture, and it all feels WAY too familiar — from beauty and technology to friendships and feminism and more.

The show features an often-lacking diversity of perspectives, and the insight — not to mention literal LOL-worthy performances in every sketch — will make you a fan on the first watch.

The Baroness-es are currently busy getting ready for a third season of the show in Toronto, but they took some time to answer a few questions via email to help us get to know them a little better.

“I want it all. I want the vagina jokes, I want the art criticism, I want the action heroes, I want the historical dramas and I want silly cartoons that have absolutely nothing to say about being a woman. You need a larger sample size to get a meaningful result.” – Aurora Browne, Baroness von Sketch Show

B+C: Your sketches are spot-on without ever feeling like parody. What’s the secret to keeping it really real?

Jennifer Whalen: Tell the truth and don’t wear too many wigs.

B+C: What do Americans need to know about Canadian humor?

Carolyn Taylor: That it’s spelled with a “u.”

B+C: What other parts of a complex female perspective would you like to see more represented in TV/movies?

Aurora Browne: I don’t even want to suggest what women should write about — the only thing I want to see is more of them making art. No one asks, “Hey, are we getting a full and complex view of the male perspective?” each time a man makes a movie because of course there are so many, many movies and TV shows made by men. I get to just enjoy each one on its own merits, and if I learn something about being a dude, great. I want the same plethora of expression for women, which is to say, I want it all. I want the vagina jokes, I want the art criticism, I want the action heroes, I want the historical dramas and I want silly cartoons that have absolutely nothing to say about being a woman. You need a larger sample size to get a meaningful result.

B+C: Who are your comedy idols?

B+C: What do your daily social media habits look like?

Jennifer Whalen: Go to work. Avoid work by looking at Facebook. Feel guilty about looking at Facebook. Consider tweeting. Get shy and weirded out. Get off Twitter. Get on Instagram, the palate cleansing sorbet of social media! Look at dog pics. Put the phone down and start work. Repeat as needed every three hours.

B+C: Is there anything off-limits in the show?

Carolyn Taylor: There is very little that is off-limits on the show, except maybe unexamined female stereotypes.

B+C: Aging is the best (usually). What would you tell young women now in their 20s about turning 30 or 40 that they might not know or believe?

Aurora Browne: The things you think you will never ever wear or do or like, you will absolutely do, wear, and LOVE. Also, invest in a good set of tweezers and a magnifying mirror now. ALSO, STOP BEING GROSSED OUT BY THE IDEA OF ANYONE OVER 40 HAVING SEX. YOU WILL HIT THAT AGE WAY SOONER THAN YOU THINK, AND YOU BETTER HOPE TO GOD YOU’RE STILL GETTING SOME WHEN YOU DO.

What Juneteenth Is and How To Celebrate