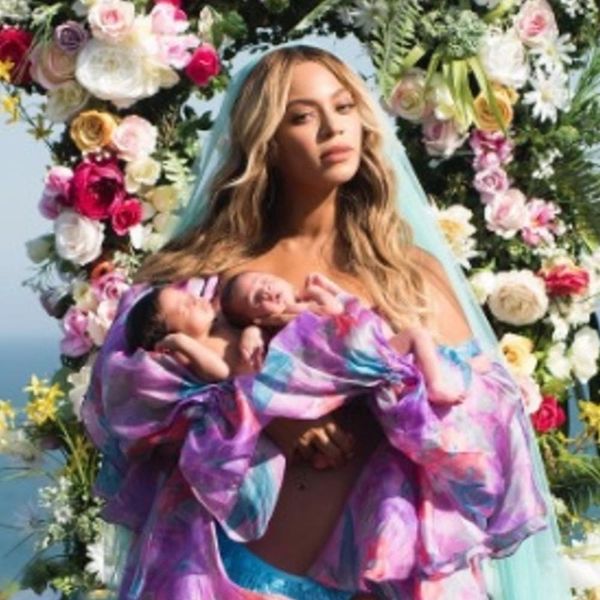 While fans pore over every detail of Beyoncé’s pic introducing us to her beautiful twins, Rumi and Sir — and as we wait for a glimpse at big sister Blue Ivy with her new siblings — parodies of the super famous photo are already popping up (natch). Granted, each will give you a giggle or two, but one happens to be so spot-on and so sweet, that it’s going absolutely viral.

Sharon Kellaway is a mother from Kilworth, Ireland who, like most of us, loves Queen B. “I would be a fan of Beyoncé,” she told the BBC. “I love her pictures, music and her photographs.”

That’s why she decided to recreate the look of Bey’s pic with her very own photoshoot featuring herself and five-month-old twins Senan and Zoe. But Kellaway’s setup didn’t include any designer items or a professional photog. Instead, this mama wrapped herself in a floral blanket and enlisted her nearly six-year-old to snap the pic.

And we have to say: Mom, twins, and the little photographer ALL did an amazing job.

“I saw [Beyoncé’s] picture and thought it was great, so I threw on a pink blanket and did my own version,” Kellaway explained. “My daughter Megan who’ll be six on Sunday took the photo. It wasn’t meant to be a big deal, I just threw on the pink blanket for a laugh and sent it to my husband and friend in Canada.”

With her friend’s urging, Kellaway then shared the pic publicly and WHAM! It quickly became a viral sensation with mamas and non-mamas alike loving this cheeky (kinda regular-person) take on Bey’s stunning image. “It’s gone bananas,” Kellaway admitted. “I’ve been on air in Canada and Australia this morning alone.”

Now she can count US readers among the fans who are getting a smile out of her awesome pic.

What do you think about this version of Bey’s twin pic? Let us know @BritandCo!

Desiree O
Desirée O is a ‘Professional Bohemian’ who loves anything and everything related to the arts, entertainment, and pop culture. She ADORES being a ‘Newsy’ for Brit + Co, covering all of the latest tidbits of awesomeness that you want to read about. When she’s not writing, she’s either making messy art, going on long adventurous walks with her camera, or poking around over at bohemianizm (http://www.bohemianizm.com/). You can find out about Desirée O and her work at http://DesireeO.com/ or follow her on Twitter @DesireeO.
Beyonce
Pop Culture
Beyonce Celebrity Baby
More From Pop Culture