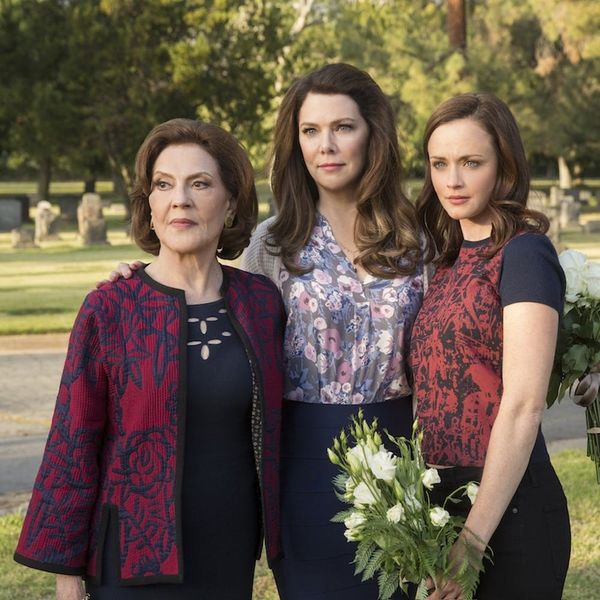 When Gilmore Girls: A Year in the Life arrived on Netflix in the fall, we immediately hibernated and binge-watched it, trying to beat spoilers to the punch. We were left with a lot of feelings to process once it was over: Was Rory actually kinda the worst all along? Who exactly is the father of Rory’s baby?! And was that really it, or would more Gilmore Girls ensue?

Admittedly, we’ve maybe been reading way too much into some of the clues being dropped by the show’s cast and creators, hoping that one of them will tell us what we want to hear. But all this time, we’ve been overlooking the biggest clue of all, which is something that Lauren Graham said in her book.

Whatever, guys, just have a few books to sign. #TAFAIC@penguinrandom pic.twitter.com/sSf7rY7FSM

Talking As Fast As I Can: From Gilmore Girls to Gilmore Girls and Everything in Between (BTW, LOL at that title, Lauren) came out the week following A Year in the Life‘s release (probably because it contained mega spoilers). While the book covers many parts of Lauren’s life, the chapters she wrote about her experiences shooting the show’s revival were especially beautiful for GG diehards, as Lauren details the emotional moments on set with everyone, as well as the close connection she’s always felt to the Lorelai character and her TV daughter Rory (AKA Alexis Bledel).

In detailing what it was like to finally say those famous last four words, Lauren admits that it never really hit her until filming the final scene. In it, Rory tells her mom she’s pregnant, then the episode ends. That’s it. It turns out Lauren was as surprised — and suspicious — as the rest of us.

“The words are wonderful, of course, and have a simple symmetry, which makes perfect sense within the origin of the story of Gilmore Girls,” Lauren writes. “They are not, however, what I was expecting, because they are not what I would call the exact definition of a conclusion. As in they do not end the story we are telling as much as they introduce something that was not previously known. Which, to me, is not precisely an ending. To me, they are really more of a…

‘Isn’t it more of a cliffhanger?’ I ask Amy [Sherman-Palladino, the show’s creator and writer].

But Amy doesn’t answer me.

HMMMM, indeed! That (non-)answer of Amy’s is WAY too vague, and WAY too much of a tease! Lauren then spends her time on set asking anyone who’ll listen if they think it’s more of a cliffhanger than an ending, though no one else seems to be as intrigued by the possibility of it as her. We’re with you on this one, Lauren!

Do you hope there will be more Gilmore Girls episodes someday? Let us know over @BritandCo!