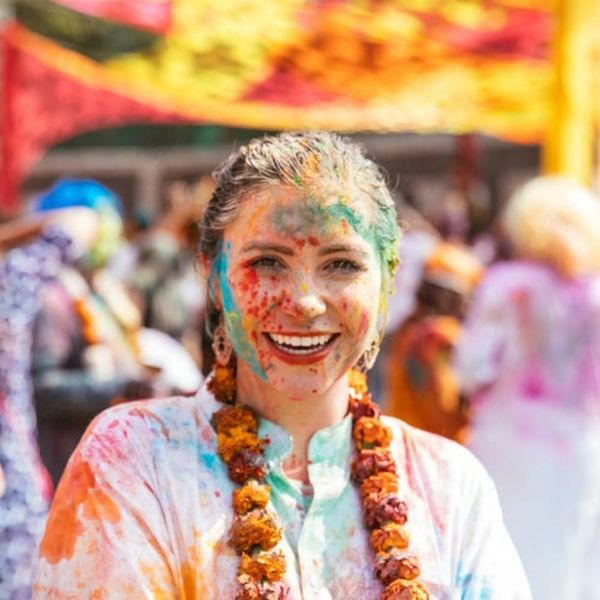 Nadine Sykora is all about the transformative power of travel. On her most recent trip, the mega-popular vlogger behind the Hey Nadine YouTube channel made it her mission to make sure that positivity flows both ways. On a journey across India, Nadine met with the activists and grassroots organizations working to change women’s lives in a place where solutions to the problems that led to the #MeToo and #TimesUp movements here at home seem much further away.

We asked Nadine about her decision to use her influencer platform to not just share beautiful images and stories, but to inspire her fans to make a difference when they travel — an idea we’d totally click “like” on.

Brit + Co: On your Instagram account, where we’ve had a sneak peek at your trip to India, you wrote that the country had been at the top of your destination bucket list for a long time. What earned it that spot?

Nadine Sykora: Talking to fellow travelers, India’s been a country that’s held the spot for [inspiring the] most life-changing experiences — and I’m not just talking about the yoga retreats. It’s the people, the culture, how [travelers] experience all these differences and learn about themselves. To me, India has always been a mystery, an exotic place so different from any of the other 49 countries I’ve been to. When Contiki reached out to me with the idea to not only travel to my number-one bucket list destination, but to also spotlight individuals who are working hard to change the lives of women in India for their The Travel Project program, I jumped at this once-in-a-lifetime opportunity!

B+C: The people you spoke to in India are working to further women’s rights in the country at a grassroots level. In the US, the #MeToo and #TimesUp conversations are focused on putting an end to sexual assault and harassment, especially in the workplace. Did you notice any common threads between what’s happening here and how these problems are being tackled in India?

NS: Yes and no. To say women in India [face these] issues is an understatement, [but] what’s happening at home versus what’s happening in India is very different. Women in India aren’t even at the #TimesUp level yet — they’re generations [away from] it. Women in India are still struggling with arranged marriages. It’s a common practice to have a husband arranged for you when you’re 15 years old. Even in the larger cities, progress is getting to (at most) have a sit-down meeting with your future husband — with everyone’s family present. The idea of a woman working is still so bizarre in the more northern states and cities. All you see on the streets are men. If you are a working woman, you’re getting constant stares.

In the airport you have different security lines, different buses, different train cars, for the sole reason that it’s unsafe [for women]. This is not to say anyone’s issues are worse than others — as women in general, our problems are vast. But there is hope in India as well as in America: That hope is awareness and knowledge. The more we talk about the issues, the more brave women come forward and voice their discontent, the more pressure gets put on the people in power to make changes to ensure safety for women in the home, at work, and in public. The more we talk, and the more we educate not just women but men as well, the better the world will be for all women, regardless of whether they’re in Mumbai or Memphis.

B+C: Here, women are pushing against the glass ceilings in different industries, demanding that corporations put them on their boards, that studios hire them to direct blockbusters, or that political parties put them in leadership roles — but in India, where less than a quarter of the workforce is female, women are fighting simply for the right to be employed. Can you tell us about some of the women you met and how their particular brand of activism is helping their communities?

NS: The women I met throughout my Contiki mission are some of the most inspiring out there. Radhika Kumari of the Pink Rickshaw Company in Jaipur is the perfect example of women helping other women. She trains women from the slums to be rickshaw drivers — some of the only female rickshaw drivers in all of India! Not only is she giving other women jobs, but those women also become part owners in the company! These women end up providing for their whole families, and when they go back home, they’re inspiring other women to follow in their footsteps.

Another example is Eat My Cake, a French bakery in Pondicherry that is owned by a woman who only employs other women as the servers and bakers. Divya Khandal started the Dhonk Centre to re-train the wives of men who were in jail for tiger poaching… All they knew was poaching, [but] now they have other means of income. All of these women are helping their communities in showing that women can be successful and be a provider for their families. In doing so, they inch ever more forward toward equality. The biggest societal issue in India is that men just don’t think women can work and be successful at it, so being able to prove them wrong is a very positive step forward.

B+C: As a successful travel vlogger, it’d be pretty easy for you to just share stories and images of beautiful, aspirational vacation destinations, but you’re using your platform to talk about women’s rights. Why is it important to you to do that?

NS: It’s important because that’s what being an “influencer” is all about: Inspiring others to not just travel to these destinations, but to travel with purpose. To learn about them and to grow as a person. Hopefully by doing that they can give back to those places. Knowledge is power. I learned this in India — how knowledge and education are the keys to more women in the workplace, more women fighting for their rights, more women being treated as equals. It’s a two-way street, though. The more we learn about each other’s cultures, the more we can learn from each other. That’s what travel does — it transforms you to make you a better person.

B+C: We’re huge fans of women undertaking solo travel adventures — they can be incredible, life-changing experiences. But those #MeToo moments aren’t just limited to Hollywood. How do you balance staying safe with not compromising your sense of adventure when you’re traveling alone and in an unfamiliar place?

NS: Here’s one area that #MeToo is very similar: street harassment. One part of traveling as a woman (anywhere in the world) is to not make yourself a target. This is done by blending in. India is a conservative country — people don’t wear shorts, and chests and shoulders aren’t shown in public. So, if you dress according to custom, you don’t stand out and you don’t get that many looks. Another tip is to learn where NOT to go — this exists in every country and city in the world. There are streets and areas you just shouldn’t go down, especially at night. Learn where those are in the foreign countries you’re visiting and avoid them. Another great option if you’re traveling solo is to join a group adventure — you’ll meet new friends, have everything planned out for you, and have a dedicated trip manager who can tell you where to go and what to avoid. When it comes to adventure, the world in real life is far less scary than the world on the news and in media. People are far more friendly and helpful to solo female travelers than they are harmful. So be cautious but not paranoid. Knowledge is key!

B+C: Finally, are there ways that travelers can use their influence (and precious travel budgets!) to have a positive impact on the place they’re visiting, especially when it comes to supporting local women?

NS: Buy from and support companies that employ women. This is the number-one thing travelers can do! If you are in Jaipur, hire the Pink City Rickshaws to take you around on a tour and eat at restaurants with female chefs. If you are in Pondicherry, go get cake from Eat My Cake. If you are in Ranthambhore National Park, buy your gifts from the Dhonk Centre. And in Mumbai, hire a female guide! It’s as simple as that. Your dollar goes a long way toward supporting women and allowing them to hire and inspire more women to do the same.

Corrina Allen
Corrina Allen is a film + television + travel writer from Toronto. Her journalistic goals include a backstage interview with David Byrne, the fictional character she identifies most closely with is John Wick, and her favorite dead person is Vladimir Nabokov. She never, ever Instagrams photos of her food (just her dog).
inspiration
Empowerment
inspiration Interview Ladies First Travel Vacation YouTube
More From Empowerment