16 Baked Pastas That Will Be Your Go-to Weeknight Dinner 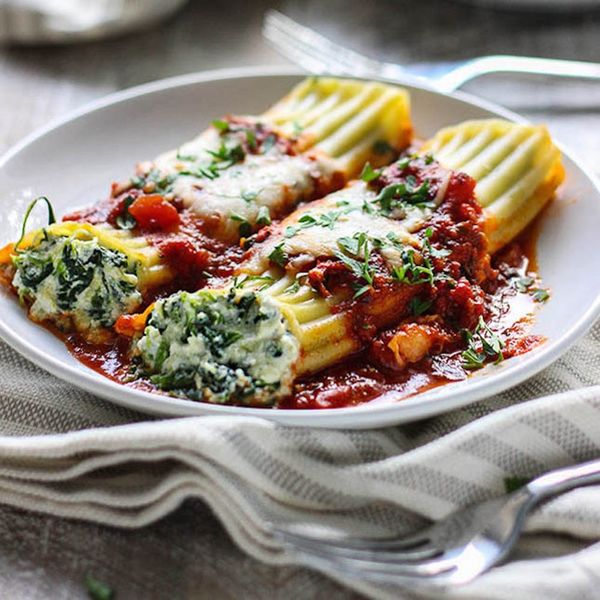 As the weather gets colder, cravings for carb-laden foods start to increase, and chilly nights call for dishes that are going to warm you from the inside out. When you start to crave some comfort food but don’t want to put a lot of work into it, an easy one-pot pasta dish is exactly what you’re looking for. Get the oven preheated, because after you check out these 16 baked pastas, you’re going to want to #treatyoself to a big bowl of comfort.

If you were forced to/LOVED to eat hamburger helper as a kid but still sometimes crave a more grown-up version, this pasta bake is for you. Try using whole wheat pasta for a more balanced dish. (via Cooks With Cocktails)

Packaged fresh tortellini is a great way to add texture and cheesiness to your baked pasta dish. Plus, if you have picky eaters at your table, they won’t even notice all the veggies hiding among the pasta. (via The Seasoned Mom)

French onion soup is comforting enough on its own, but mix it with even more cheese and fluffy gnocchi and you’re going to be at #foodcoma status in no time. (via Sweet Love and Ginger)

Don’t let this vegan lasagna fool you! It may be packed with vegetables and dripping with vegan cheese, but it’s no less hearty than its carnivorous counterparts. (via Pür Body Nutrition)

2016 might be the year that tuna casserole gets a good rap. Made with fresh mushrooms, carrots and chicken stock, this lighter version of traditional tuna casserole will make you feel good about what you’re putting in your body —and it’s WAY tastier too. (via Gimme Some Oven)

There are few problems that mozzarella and meatballs can’t fix, but just in case they’re having an off day, this one-pot pasta is here to the rescue. (via Well Plated by Erin)

If you bought a spiralizer but haven’t made the time to use it… do so NOW. There’s no need to run to the store if you’re out of pasta; just spiralize a sweet potato and you’re good to go. (via Pork and Greens)

Can’t decide what ingredients to use in your pasta dish? Throw in everything that tops your favorite pizza and admire your creativity while chowing down. (via Cook With Manali)

The best thing about this pasta is not the cheesy goodness (although that is great), but the fact that you mix the dry macaroni with all of the ingredients and let it sit in the fridge overnight. The noodles soften and the next day dinner is ready in no time. (via Flavor the Moments)

Nothing is better than pulling out a homemade dish from the freezer to enjoy on a busy work night, especially when it’s filled with cheese and pesto. (via Oh My Veggies)

If you have never had avocado with pesto, then you are sorely missing out. The creamy texture of the avocado balances with the mild flavor of the pesto perfectly. Don’t be afraid to utilize jarred marinara on this one… you have to stuff all of those shells, after all! (via Sweet and Savory by Shinee)

Essentially, this recipe is cheese and buttery fresh pasta. What more could you ever ask for in your #cheeseporn? Plus, this traditional German dish will surely wow your dinner guests. (via A French Girl Cuisine)

When you’re wanting to upgrade your typical baked pasta, spaghetti pie is where it’s at. After the pasta “crust,” you’ll find a thick layer of cream cheese, veggies and meat, topped by more cheese. Nom nom, indeed. (via Culinary Hill)

Fresh jalapeños and three-pepper colby jack give this mac and cheese a little something unexpected. This one is especially made for anyone who is a huge fan of spicy food but still wants a simple meal. (via The Country Contessa)

Any excuse to play with your food is totally welcomed. Grab a piping bag and go to town filling al dente manicotti with creamy ricotta filling. In the end you’ll have a restaurant-quality dish that even a toddler could have made. (via The Cooking Jar)

What you can’t see under the layer of cheesy goodness is a mound of fresh veggies. That totally means it’s healthy, right? (via Endurance Zone)
Paige Johnson
Paige is a blogger, food writer and culinary master from Louisville, Ky. She's a newlywed who's obsessed with dogs and renovating her 117 year old home. When she's not working on her blog — My Modern Cookery — you can find her binge watching F.R.I.E.N.D.S with a triple shot latte in-hand.
Comfort Food Recipes
Recipes
Comfort Food Recipes One Pot Meals Pasta Recipes
The Conversation
Reviews:
More From Recipes