What Playing LEGOs With My Son Taught Me 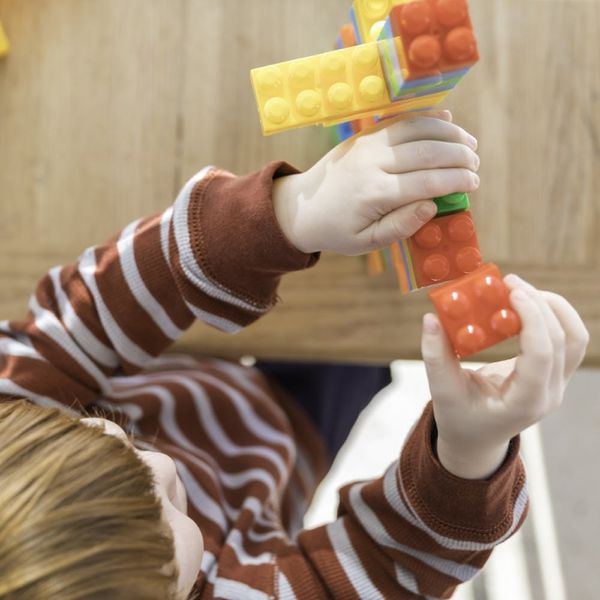 Let me just cut to the chase: My house hasn’t been clean for nearly four years. But it’s not because I don’t try — I do. Well, I did. Until I realized that, as a mother to two small, very exuberant boys, attempting to keep the house picked up at all times is not only counterproductive, but a little bit mean — like ripping flowers from a garden or tearing down old, charming brownstones to build an eyesore of a condo development.

When I crawl, frustrated, through the living room shoveling tiny toys into plastic bins, it’s like I’ve forgotten what the mess is in the first place: evidence of life. My house isn’t messy because there are toys in it. My house is messy because there are boys in it. Boys whose idea of fun is dumping out said bins just for the thrill of it. Boys to whom LEGOs are the most valuable currency. Boys who just want me to play with them.

Most days, playing with my kids feels like more of a chore than cleaning does. Getting on the ground on all fours to play cars (or whatever vehicle my kid is obsessed with on any given day) not only doesn’t do anything for me; it absolutely confounds me. Playing with toys, let alone tracing the perimeter of my entire home with tiny vehicles, kind of goes against my nature. It’s not that I’m a particularly serious person; it’s just that my idea of “fun” is a little bit different. While my husband could spend all afternoon building Lincoln Logs or wrestling with the kids, I would much rather sit across the table from someone, novelty beverage in hand, and talk about books or music or the latest episode of This Is Us.

I wasn’t expecting to resent playing with my kids as much as I do on some days. But I also wasn’t really expecting to be a boy mom. When I got pregnant with my first son, I had a gut feeling (and by gut feeling, I mean preference) that the baby would be a girl. I picked out a name, I went shopping for little chambray outfits from Baby Gap (keep in mind this was 2013!), and I daydreamed about afternoons spent finger painting while eating charcuterie plates and talking about our feelings. That’s what I’m good at. I’m good at emotions. I’m good at creativity. I’m not good at playing — and maybe that’s why I don’t like it. Playing isn’t satisfying because playing takes work. But that’s not what parenthood is. Relationships aren’t about loving someone how you want to be loved. Loving someone is about putting your preferences aside in favor of someone else’s, even if it isn’t fun. Even, I’ve learned, if it confounds you like tiny plastic blocks confound me.

So I shouldn’t be surprised that in its commitment to make me a more selfless (and joyful) human, the universe gave me two boys. Instead of a miniature version of myself, I got a pair of boys who, thank goodness, don’t indulge the self-indulgent fantasy of a childhood I created for them before they came into the world. Boys whose primary concern on any given day is whether or not an object has wheels (and how fast it goes). Little boys who, covered in bruises and something sticky I can’t identify, are so much better than something I could have conjured up in my own imagination.

A few months ago, in the ultimate gesture of self-sacrifice, I spent the morning building LEGOs with my three-year-old (mind you, it was before I had coffee). I quickly became exasperated when I realized I missed a page of the directions and had to undo 15 minutes’ work to make it right. I had expected my son to be impatient and frustrated, but instead, he looked over my shoulder, captivated by the process of building something together, of doing something he loved with his mom. Snapping the last piece into place, I handed over the finished product, equal parts shocked and proud that I managed to pull it off. It felt good, but I suspect it felt even better for him. “You’re GOOD at LEGOs, mama!” he squealed, delighted, as he smashed the rocket to pieces on the dining room table.

What’s the most important lesson you’ve learned from parenting? Share it with us BritandCo.